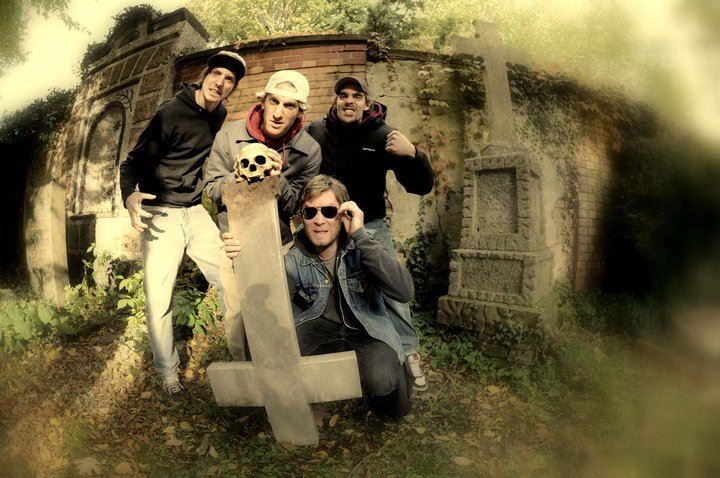 Scheisse Minnelli is a Skate/ Punk-Rock band based in Aschaffenburg, Germany. The band was started in late 2003 by two native Californians and two Germans. After backpacking around Europe and the Middle East, Samuel el Action decided to set roots in Germany. The thought of playing the Califonia punk he grew up with, in Europe, enthralled him on a daily basis. He first met drummer Dudel on a drunken weekend binge in Ashaffenburg. That night Dudel promised Action they would play in a band together. At that point Action was living in The Shit House in a small village. There, he had no heat, no hot water and shared the house with a bunch of Polish construstion workers. After recruiting Dudel, Action made a call to the USA and got Egore (Oppressed Logic, You Die) to fly out and help him start the band. Dudel then rounded out the band by inviting Dash, an expert bass player to join the crew. This was the first Scheisse Minnelli line up that played the infamous house wrecking party at the Shit House, that night Egore and Action moved to Aschaffenburg escaping the cops and the law, since no real contract was signed with the landlord of the house. This line up would do the first tour through Holland and Belgium which ended with a opening slot for Poison Idea at the now infamous Lintfabrik. Egore then left the band to return to California. At this point, Action would not let the band, he'd just started 6 months before, fall apart. He found local mad man Felix. He fit in the band perfectly , adding amazing guitar skills, as well as intensity, which is rarely seen in this day and age. Felix ended up leaving the band, and is replaced by Alex. Scheisse Minnelli has played over 200 gigs and shared the stage with the likes of the Poison Idea, Murder Junkies, Retching Red, Butt Trumpet, Municipal Waste, Seein' Red, DI, Christ on Parade, Antiseen, U.K. Subs, Subhumans, Beowülf, Pennywise, NOFUN, NOFX and also have toured twice, with Italian Hardcore legends Raw Power. Scheisse Minnelli has toured all over Germany, Belgium, Holland, Switzerland, Austria, Spain, Italy, France, Czech Rep, England, Hungary, Serbia, Croatia and have toured the USA twice, playing over 50 gigs in the USA. Their debut full length EXIST TO GET PISS'T album was released on vinyl from TWF Records in Germany, and on CD from King Fing'r/Hairball 8 Records in the States. They have numerous other releases including a new 7 inch THE SHIT HOUSE out now on Sick of Talk Records. They signed with DESTINY and released their 2nd Album THE CRIME HAS COME. Which is out now, and was released in the U.S. December 2009 on Beanies Records. Scheisse Minnelli went in the studio, recorded their 3rd album THE FIGHT AGAINST REALITY in this line-up, which was explosive, intense and stronger than ever. Scheisse Minnelli toured in support of this release in Europe in December/January '10/11 and followed up with a U.S. Tour in April 2011. There's yet more to be revealed with a new man on guitar, Mikey Porter joined the crew in July/August 2011 just for fun at first, but now for good...we hope he's here to stay.