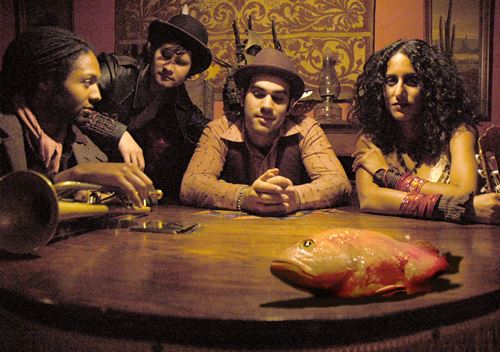 September 30th, 2009 – San Francisco’s global agit-pop group Rupa & the April Fishes will perform select shows throughout the US, Canada and Mexico this fall in support of their forthcoming album este mundo, due out on Cumbancha Oct. 27. The tour includes performances at The Mezzanine in San Francisco, The Mint in Los Angeles and The Bellhouse in Brooklyn among other cities.
Described as “one of the hottest emerging acts” by Time Out, Rupa & the April Fishes mix in elements of Gypsy swing, Colombian cumbia, French chanson and Indian ragas for a sound that effortlessly blurs the boundaries of genre and geography.
Over the past year, the group has brought their infectious live show to adoring crowds at NY’s Central Park Summer Stage, the Montreal Jazz Festival, San Francisco’s Outside Lands and Stern Grove festivals, not to mention dozens of Europe’s most prestigious festivals and venues. The group has been compared to Gogol Bordello, Manu Chao, Beirut and other boundary-breaking genrestraddlers.
While in New York, the band will participate in the second installment of the adventurous music series, “Is America part of the World?” Part II of this series will also feature the band Nation Beat and will take place at The Bell House in Brooklyn on November 13. This series aims to challenge the way we think about “American” and “World” music with artists that are home-bred and worldtraveled.
Rupa & The April Fishes will also present ¡Catapulta! at The Brava Theater in San Francisco on October 9 & 10. This unique concert and multidisciplinary event was put together to help dispel fears among immigrants about public health options.
As a practicing doctor, lead singer Rupa is particularly passionate about the human impact of US anti-immigration policies and how it affects immigrants’ (documented and undocumented) ability to seek public health care. Over the past several years, she has met countless patients who sought medical attention late in their disease process for fear of deportation. She was awarded a grant by
the SF Arts Commission to bring her inquiry of these issues to a deeper level, which lead to the creation of music for ¡Catapulta! and este mundo.
If local singer Rupa were a movie, she would be Amélie meets Women on the Verge of a Nervous Breakdown meets Latcho Drom meets Do the Right Thing. She'd be set in India and Berkeley...She would be (and, in fact, is) an instant cult classic among the smart, idealistic, international set. --Hiya Swanhuyser, SF Weekly
While the music of Rupa & the April Fishes defies categorization, their intimate sound combined with a broad appeal has earned them comparisons to everyone from Manu Chao, Pink Martini and Lhasa to Beirut, Dengue Fever, Gogol Bordello and Keren Ann. Rupa’s nomadic upbringing has led her to write songs in a multitude of languages, including French, Spanish, Hindi and English. With themes ranging from love and death to politics and philosophy, the songs offer a magic carpet ride through time and place and embody Rupa’s goal of breaking down borders both real and imagined, arranged for cello, accordion, guitar, trumpet, upright bass and drums.
Besides being a songwriter and band leader, Rupa is also a doctor, splitting her time between her music career and caring for patients, whom she often finds inspiration from. “A lot of my music feels like it derives its heart from these vulnerable encounters with people,” says Rupa. “Taking care of people is such a deep inspiration for so many things, but especially music.”
The band is based in the lotus-eaters land of San Francisco and has toured on the West Coast, Mexico, NYC and Europe. They have traveled to Tijuana where they stayed with deported migrants and learned more about the humanistic impact of the US-Mexico border. In San Francisco, they have orchestrated spectacular sold out shows at the Great American Music Hall and the Independent, working with local musicians, performance and visual artists to create transportive events, removing the audience from ordinary experience to create fresh perspective. Rupa & the April Fishes have had the honor of working with Marcus Shelby, Michael Franti & Spearhead, Aterciopelados, Susana Baca, Rodrigo y Gabriela and Richard Dawkins. They play in concert halls and on streetcars, inviting people from different backgrounds to get together across supposed divides for a shared moment.
[Via Myspace: http://www.myspace.com/aprilfishes]