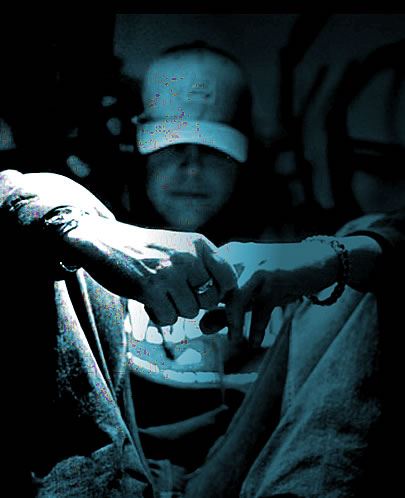 Rowland the Bastard (whose name comes from his straight-to-the-jugular style of mixing, and not his attitude!) started djing back in 1993.
He could be found taking control of the dance floor at many free parties in the south west of England.
Out of these nights emerged a fuck-off sound system co-run by the legendary Pigfarmer and Rowland himself.
Together they were renowned for putting their 30k sound assault in any field, beach or squat, at anytime, anywhere.
By 1996, Pigfarmer and Rowland joined forces with Bristol based party crew Sunnyside, and went on to organize some of the biggest parties Bristol had ever seen, attracting as many as 5000 party-people a night during their two month reign over the cities' industrial estates.
Working with Sunnyside introduced Rowland to London based crews UN Sound and the Big Sexy Festy organization, this led to bookngs at many underground party venues including Parkway Cinema, North London Uni, The Rocket and Hackney Marshes.
Around this time Rowland started working for Plymouth based record shop & record label Urban Collective, in their Exeter branch.
It wasn't long before Rowland gained the knowledge, encouragement and enthusiasm to establish his own record label, Bionic Orange.
The first release on Bionic orange caught the attention of chris liberator who was so impressed with the tune that he approached Rowland with the offer of doing some remix work and collabourating on some production projects.
Still tied in with the Urban Collective, Rowland was asked to play in the house room at Dreamscape on new years eve in 1995.
He caused total mayhem whilst playing a mix of Acid with a dash of Hard House and Techno.
By this time, Rowland was getting strongly into a new sound: ACID TECHNO.
Soon after his performance at Dreamscape, Rowland was called to a meeting in London with Smitten records head honcho Steve Smitten.
Steve showed great interest and put the offer to Rowland to remix Geezer's "Prozac"(Smtr-002) engineered by the man himself, Guy Mcaffer.
Rowland and Guy mcaffer then went on to forge a strong friendship.
In early 1998 Rowland and Geezer decided it was time to join forces, and due to their extreme smoking habits in the studio, Tarball & Lungbutter were conceived.
Tarball & Lungbutter were rapidly becoming household names in the Acid Techno scene, and with continued support from the likes of D.A.V.E the Drummer & chris Liberator and with release after awesome release on smitten, bionic orange and stay up forever, Rowland rapidly gained much global acclaim.
In Mid 1998 having made a massive impact on the underground techno scene, Rowland embarked on his first solo U S tour.
This five week adventure kicked off raves in cities such as Chicago, Kansas, Milwaukee, Cleveland and Pittsburgh, not to mention the mid-week clubs and several radio shows.
During the latter part of 1998, after weeks of discussion about the lack of distribution for Techno/ Acid Techno, Rowland and Mark Kinetec decided that it was time for action, so they joined forces and started Infectious Distribution. This alliance also gave way to some new labels that Rowland was responsible for in the areas of both management and A&R
These labels being - Infected, Antidote, Cut'n Dry, D, Chunk, Twitch, Strata and F.u.2.
By popular demand, Rowland embarked on his second solo U S and Canadian Tour, on New Years Eve 1999. This excursion lasted six weeks and consisted of 22 gigs.
killer-sets were spun in cities as far afield as Cleveland, Milwaukee, Pittsburgh, Toronto, San Francisco, Kitchener, Niagara, Chicago and Kansas. . as well as five radio shows and a TV appearance on the famed Electric Circus (Toronto) which included satellite broadcasts from the top of Canada to Mexico, this tour was a huge success.
Rowland is now flying frequently back and fourth from Europe, United States and Canada, playing a blend of sounds ranging from deep dark Techno to full blown banging Acid Techno.
He runs a successful distribution company, five record labels, producing tracks for all of them as well as other labels, and still regularly plays london techno gigs amongst others all over the UK.