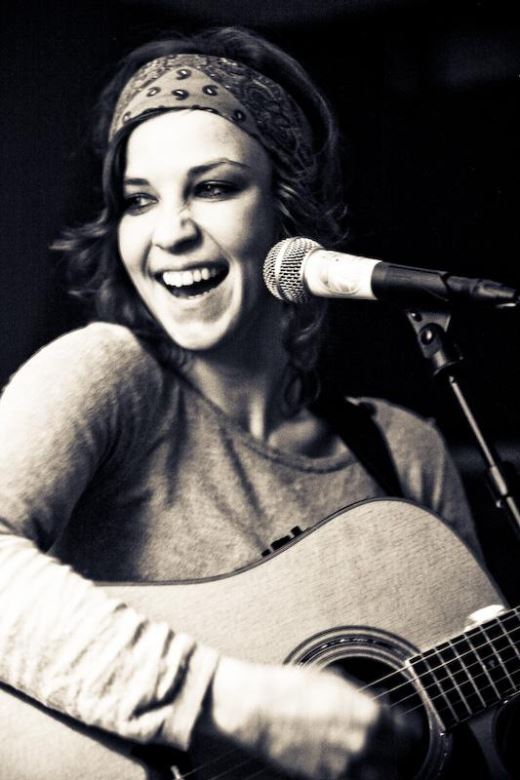 The truth is, very few new artists deliver a debut album which knocks you for six. Mostly, they’re happy to find an audience, grab their ticket to the rock’n’rollercoaster and hope no one asks too many questions about their stage school past.
Rosie Doonan is different. In conversation she readily admits to gaining inspiration from influences as disparate as the Beta Band to Laura Veirs to Free, but musically she reflects such divergences with tunes of such celestial grace you’re left thinking they must be covers. “I grew up listening to The Stones, Joni Mitchell and Free,” she explains. “But my roots are in the folk scene, so that’s in there too. But I’d like to think I’ve added something extra. It’s a very personal record, and I mean every word of it.”
But there’s more to Rosie than songs blessed with such warmth they’ll halve your winter heating bills. She wants your mind, too. Listen a little closer to Moving On and you’ll hear desolate astral-folk (“Hold On”) pithy social commentary (“Little Boat”) and tales of love-gone-bad to make Amy W sound like a Blue Peter presenter. “It’s fair to say I’ve been through some emotional upheavals in the last couple of years,” she laughs. “A few people have said ‘it sounds like you’ve been through the mill’, but that’s where the best must comes from. It’s a form of catharsis.” Rewind.
Growing up in Wakefield, Rosie found herself “surrounded by music”. Living in a house overflowing with hung over musicians - her dad played uilean pipes in folk luminaries Hedgehog Pie, an ‘uncle’ was in Lindisfarne - she was a free festival veteran by fourteen. “I guess you could say it wasn’t your average childhood. We would go to every festival going. All the kids would hang around together and then we’d go and see our parents play in bands. It gave me a good grounding in what being a musician is all about.” Whilst the cider flowed, Rosie wrote. Having made her stage debut playing sax in her dads band The Solicitors (don’t ask), Rosie was soon recognised as a natural singer, duly joining local acapella, group Sweet Nothings, whose vocal pre-eminence saw them play at the Albert Hall.
For Rosie, however, the capital was already calling. “It was the old cliché,” she laughs. “Me and a friend moved to London thinking we’d make it in six months. We ended up living in a flat in Latimer Road, completely broke, playing gigs on the open mic circuit. It was soul destroying, but at the same time, I learnt a lot about playing live.” Salvation from greedy landlords and unscrupulous promoters came in the form of a call from childhood friend and fellow songwriter Ben Murray.
Returning to Yorkshire after eighteen months in the smoke, she poured out her experiences into the sublime Mill Lane, which was duly rewarded with a Radio 2 Folk Award Nomination. Inevitably, however, Rosie felt the urge to strike out on her own once more. “It was difficult, because Ben and I worked well together, and we were accepted on the folk scene. But I’ve always felt deep down that I had to make a record on my own, so I rang a few old friends and luckily things just fell into place.”
All of which brings us to the low-key marvel that is Moving On. Recorded in Cumbria with producer Joss Clap, you can almost hear the ghosts of Brit-folk’s illustrious past drifting through its eleven tracks. If “Only One” and jaunty rag-time stomp “That Boy” offer two sides of the break-up coin, it’s “I Need You Around” (“Don’t hold on too much too this/It’s the final kiss/And the rain keeps falling down”) which reminds us that we’re studying the rules of engagement from a perspective worthy of Bronte country. Equally, if you thought modern rock was incapable of matching the emotional pull of the past, fast forward to piano lament “Hold On” (“the hurt becomes too much from time to time”) and tell us you’re not reaching for the Kleenex. Not that Rosie has conquered the raging rock’n’roll fevers which led her to decamp to the capitol all those moons ago. “Outside In’ is an otherworldly ode to the questing spirit (“We will travel far and wide/ Search for a holy place”) whilst “A Journey” (“I’m going to escape/Gonna ride from place to place/ Nothing left of me no trace”) is an evocative portrayal of life on an emotional knife-edge. “Little Boat” meanwhile is a gritty vignette of street scenes and human tangles which tackles Margaret Thatcher’s contribution to life in South Yorkshire head on: “Open another box of red wine/You can tell me/ That Margaret was a bitch/Who closed down all the pits/ Who killed off our community”. Everywhere you look the emotions are raw, the playing kinetic; the tunes worthy of break-up pop’s high table: the Joni of Court and Spark; the Richard and Linda Thompson of Shoot Out The Lights; the John Martyn of Grace and Danger.
For Rosie herself, Moving On symbolises where she is right now; at the crossroads, hitching a ride to the future. “I want as many people as possible to hear my music, because it’s got a universal theme” she explains, as night draws in. “At the moment, I play gigs in Wakefield and there’s a big crowd because people know me. That’s great, but the time has come to get out there and play to people who only know me through my music. I’ve put my heart and soul into the record, and I’d like to think you can hear it in the songs.” Indeed. Whilst her peers scrabble for to sound contemporary, she’s announced herself as a major talent by turning her sorrow into music as joyous and uplifting as Moving On. The past is the past. But the future’s Rosie.