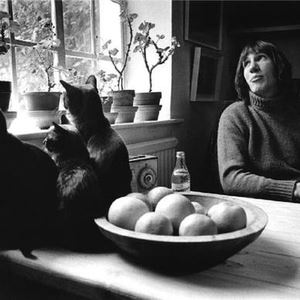 George Roger Waters (born 6 September 1943 in Great Bookham, Surrey, United Kingdom) is an English musician, singer-songwriter and composer.
Roger Waters was the main lyricist for the classic British rock band Pink Floyd. He, along with Syd Barrett, Nick Mason, and Richard Wright, formed the band in 1965 and released their first album, "The Piper at the Gates of Dawn" in 1967. In 1968, Syd Barrett was replaced by guitarist/singer David Gilmour. He and Gilmour were the main creative forces behind the albums "Meddle," "Dark Side of the Moon," and "Wish You Were Here"; Waters eventually became the primary songwriter, being the driving force behind "Animals", and "The Wall" as well as the sole songwriter of "The Final Cut". Waters became well-known for being an intense perfectionist and his controlling nature alienated the rest of the band. "The Final Cut", released in 1983, was essentially a Roger Waters solo album "performed by Pink Floyd" as the credits stated. This would be the group's last album together. David Gilmour decided to carry on with Pink Floyd, without Waters. Waters, believing that Pink Floyd was a "non-entity" without him, sued the rest of the band to retire the Pink Floyd name. His lawsuit ultimately failed, and Pink Floyd released two more studio albums (each followed by a double live album) without him. In 2014 Pink Floyd released another studio album - the endless river - based on the recordings of the album the division bell.
The feud between David Gilmour and Roger Waters lasted for decades, and it wasn't until Live 8 in 2005 that they finally decided to set their differences aside and perform a brief set for the charity gig. This would be the last time that Pink Floyd would ever perform together in their "classic" lineup. Shortly after the show, there was much speculation that Pink Floyd would get back together for a full reunion tour, but Gilmour ultimately nixed the idea, stating that although the Live 8 gig was fun, the rehearsals were not.
Much to everyones surprise, Gilmour and Waters reunited once again on July 11, 2010 for a charity performance for “The Hoping Foundation,” an organization that supports Palestinian refugee kids. At Ronnie Scott’s club in London, the duo performed four songs together: “To Know Him is to Love Him” (a cover of the old Teddy Bear’s song), “Wish You Were Here,” “Comfortably Numb,” and finally (after a special request) “Another Brick in the Wall Part 2.” Once again, just like after the Live 8 Reunion, speculation began regarding future reunions. No official Pink Floyd reunion has yet been set, but Gilmour did promise that he would join Roger Waters for one show on his 2010-11 “The Wall” tour, performing “Comfortably Numb.” The show that Gilmour is set to play is being kept a secret to surprise fans and (most likely) to prevent scalpers from selling tickets at outrageous prices.
The door now seems slightly ajar that David Gilmour and Roger Waters may possibly work with each other again, either as a duo, or as Pink Floyd once again. On Roger Waters facebook page, he wrote: “We (played together), and it was fucking great! End of story. Or possibly beginning.”
Waters has so far released the following solo albums:
* "Music From The Body" soundtrack with Ron Geesin(1970)
* "The Pros And Cons Of Hitch Hiking" (1984)
* "When The Wind Blows" soundtrack with contributions from other artists as well (1986)
* "Radio K.A.O.S." (1987)
* "The Wall: Live In Berlin" (1990)
* "Amused To Death" (1992)
* "In The Flesh" live (2000)
* "Flickering Flame: The Solo Years, Vol. 1" (2003)
* "Ça Ira" (Opera) (2005).