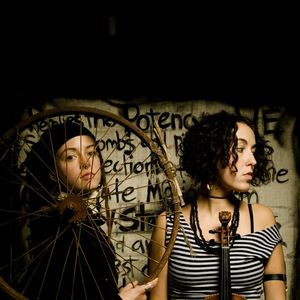 Rising Appalachia is an American musical group led by multi-instrumentalist sisters Leah Smith and Chloe Smith.
The group brings to the world new sounds, stories, and songs collected across oceans and originally sculpted to embody our human journey, our global community, and the treasures and troves of soul harmony. Listen to their beautiful sound for poetic harmonies, soul singing, spoken word rallies, banjos, fiddles, organic bass and groove rhythms, and community building through SOUND. With an array of incredible collaborators, they are joined by everything from jazz trumpet to beat boxing, Afro-cuban percussion to Appalachian fiddlers, poets to burlesque and circus art as their style redefines performance using sound as a tool to spark a cultural revolution and birth a new movement of unity and healing.
Having toured across the United States and graced many stages around the world, Rising Appalachia’s vision and sound is contagious to everyone it touches. Their shows have included an array of community-run venues and collective events, as well as the Kennedy Center in Washington DC, National Public Radio All Songs Considered, Georgia Public Broadcasting, The School of Americas Vigil, Nunez Arts Festival New Orleans, Emory University Schwartz Center, The Floyd Festival, Burning Man, Envision Festival, The Naropa Institute, The Beacon Theater NYC, The Lake Eden Arts Festival, Radio Popular Italy, Guerilla Radio Amsterdam, The Edinburgh and New Orleans Fringe Festival, The Highlander Center 75th Reunion, and many more.
Their prolific self-sculpted career has included five independently-released full length albums have sculpted a path for the new generation of music aficionados and created a new lens to understand the impact of global sound on the world at large. Having been raised in the American South with Appalachian lullabies at night and soul music for breakfast, sisters Leah and Chloe have drawn great inspiration from their global and local community. Their mother and father claimed art and music as a full part of their lives and thus the sisters have been shaped by the sounds of the South. They have continued to use those powerful roots to find musical connections and community around the world..
“Music is the tool with which we wield political prowess. Melody for the Roots of each of us…spreading song and sound around the globe. Music has become our script for vision… not just for aural pleasure, not just for hobby-but now as a means to connect and create in ways that we aren’t taught by mainstream culture…we are building community and tackling social injustice through melody- making the stage reach out with octopus arms to gather a great family. It is taking its own personality, carrying us all along the journey down the damp and strange alley ways and cryptic coded pathways… to poetic observations, social change, lyrical messages, political rage, symphonic coercing, ferocious bantering, bicycles and train tracks, primal will, fresh air intoxicants, harmony and alliteration, noise and something sweeter than words can ever touch. ” Leah Song.
Rising Appalachia were voted “Green Album of the Year” by the Huffington Post and Atlanta’s Best Folk Act by the Creative Loafing, and have been written up in Paste Magazine, The New York Times, The Performer Magazine, Dirty Linen, Sing Out, Georgia Public Broadcasting, Anti-Gravity, Maverick and more. Their tours have taken them across Europe, through the Caribbean, into Central America, into the Indian subcontinent, and across the United States making sacred sounds and elaborate stages wherever they go. They are creatively committed to keeping their work accessible at the local street level as well as expanding to larger audiences abroad, and have continued to maintain autonomy by self- managing, recording, producing and creating, and directing their work. They are greatly honored to do the work that they do.
Tradebit: MP3 Rising Appalachia - Leah and Chloe
Official Website: Rising Appalachia