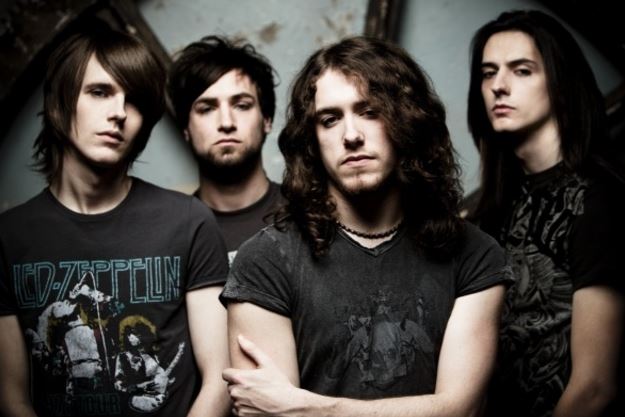 Revoker nod to heavy metal’s past, while fueling the flame of its future.
On their Roadrunner Records debut, REVENGE FOR THE RUTHLESS, the Welsh quartet fuse dangerous thrash riffs to infectious and timeless choruses, which isn’t so easy to do in the metal sphere. Songs like “Stay Down” rise with anthemic hooks, while “Psychoville” converges its path of bruising melodies and unpredictable vocals. The United Kingdom has produced some of hard rock and heavy metal’s most beloved acts, and these four lads from Wales continue that tradition. Revoker—Jamie Mathias [Vocals, Guitar], Chris Green [Lead Guitar], Shane Phillips [Bass], Jack Pritchard [Drums]—are about to invade psyches everywhere.
About their sound, Green puts it best, “It’s the new old school. All of our influences are classic metal and hard rock bands, but we channel them into our own sound. Each song tells a story and has a beginning, middle, and end. That keeps things interesting.”
Hints of Metallica and Machine Head pulsate at the heart of Revoker’s debut, but there’s a distinct, fresh attitude leading the charge. Revoker collectively grew up in South Wales, and Mathias and Green have been playing together since they were 13-years-old. Once the duo needed a rhythm section, schoolmates Pritchard and Phillips eventually found their way into the band’s ranks, solidifying the lineup in 2006.
“We were all in the same school, and you could always find Jamie in the headmaster’s office. If I wanted to know what time practice was, I didn’t call him; I went to the principal’s office and asked,” laughs Phillips.
Revoker’s first single “Stay Down” proudly brandishes that free and rebellious spirit. With its pulsating refrain and bombastic guitars, the song is a veritable fist-pumping brawler. “It’s basically about a weekend where we live,” declares Green. “You go out, have a few drinks, and get in a scuffle but it’s a good time. We’re the odd ones out in South Wales. We’ve got long hair, love heavy rock music and don’t play rugby. We’re always fighting back.”
That fight resounds loud and clear on everything Revoker does. After they perfected this sharp sound and unforgettable live show, Roadrunner Records signed the band in July 2010 and immediately encouraged them to hit the studio.
Revoker recorded with Skindred’s Benji Webbe behind the board. The band caught his attention while they were recording an EP at Nott-In-Pill Studios. He heard Revoker tracking down the hall and knew that he had to work with them. From helping the band get their foot in the industry’s proverbial door to honing their sound, Benji’s pushed Revoker to the next level.
Phillips goes on, “Benji has given us advice on everything from writing songs to what to say in interviews. He’s helped us a ton.”
Green laughs, “The only time Benji gets pissed off is when he doesn’t have a biscuit. We’ve got a great team working on this album, and it’s been a wicked laugh.”
However, Revoker can get serious when they need to. They hunkered down in the studio with Benji pulling out some intriguing heavy metal in the process. One of the band’s most corrosive and cathartic tracks, “Psychoville,” sways violently. Based on a riff from Mathias and lyrics from Pritchard, the song illuminates Revoker’s strength as a team as each member participates in every song.
“’Psychoville’ is about having two voices in your head,” reveals Mathias. “It’s that exaggerated day-to-day paranoia that everybody faces. We’re always worrying about certain things and arguing internally. With us, it’s slightly more eccentric, especially in Jack’s case.”
Revoker’s screams have already captured audiences overseas. The band turned heads during incendiary, memorable performances at Download 2010 and Hammerfest 2010, as well as on full tours with Soulfly and Skindred. With their performances, they’ve captivated numerous fans and made believers out of them, and that’s just the beginning.
Their homeland of South Wales will always be a part of the Revoker’s musical identity. Green exclaims, “A lot of our music is quite aggressive because there's nothing to do around here. There's a boat load of boredom and frustration, and that comes out in the music.”
Matthias echoes that sentiment. "A lot of bands where we live do the same thing. They're in the same clique. We don't follow any trends, and that's something we're proud of. We just make music we get a kick out of."
In many ways, the band’s name sums up that ethos. “It’s a term used in playing cards,” says Green. “When you’re supposed to be following suit, you choose not to. You essentially decide against what the standard is. We don’t follow our suit; we do our own thing.”
Ultimately, not following suit will take Revokver very far especially when their full-length debut officially releases in 2011. Phillips concludes, “The music takes you somewhere else. You can go wherever you want with it. When we were recording the record, we didn’t settle for anything less than brilliance.”
Even though they have a tight grip on history, Revoker’s time is now.