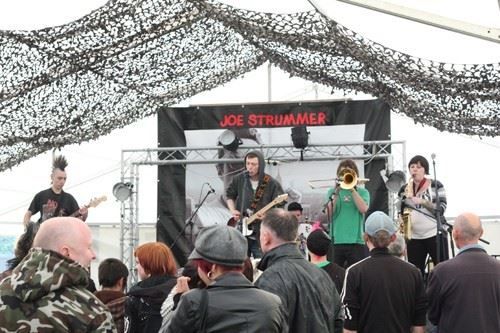 Rasta4eyes are a 7-piece band from Merseyside playing a unique mix of ska, punk & dub reggae combined with soulful brass harmonies, jaw-dropping sax solos and conscious lyrics delivered powerfully & melodically.
After forming in late 2008, Rasta4eyes were quickly snapped up by UK Ska Record Label 'Do The Dog Music'. Releasing a split-album with CBNS in 2009, the band went on to play shows all over the UK, including mainstage festival appearances, prestigious support slots and packed headline gigs. Regulars on the mainstage at Strummercamp Festival - the annual tribute to Clash frontman Joe Strummer, the band have also been lucky enough to grace the mainstage at Bearded Theory Festival, as well as playing other festivals along the way including Boomtown Fair, Threshold, and Wales' Kippertronix & Swansea Ska Festivals. Playing at these big events has seen the band perform alongside a wide range of internationally acclaimed artists as well as heroes from days gone by and some of the best up and coming talent the UK has to offer, these artists include Toots & The Maytals, The Beat, The Selecter, Dub Pistols, Dreadzone, The Aggrolites, Wheatus, Jaya The Cat, The Neville Staple Band, Gentleman's Dub Club, The Skints, Jeramiah Ferrari, Random Hand, Radical Dance Faction, Chumbawamba, New Town Kings, David Rodigan, Smiley Culture (RIP), Laid Blak, The Blockheads, The Damned, Billy Bragg, and the remainder of 2012 will see them perform alongside Reel Big Fish, The Skatalites, Capdown, Jah Shaka, Macka B, Alborosie, Natty, Zion Train, Tanya Stevens, The Slackers, OPM, The Filaments, Yes Sir Boss & many more amazing people.
Website/Blog: http://rasta4eyes.co.uk/
BandCamp: http://rasta4eyes.bandcamp.com/
Twitter: http://twitter.com/rasta4eyesuk
SoundCloud: http://soundcloud.com/rasta4eyes/tracks
BigCartel: http://rasta4eyes.bigcartel.com/
Youtube: http://youtube.com/user/rasta4eyesuk
Do the Dog Music (Record Label)
"Rasta4Eyes are a fast rising young crew who have been building a strong local following gigging in the Wigan area over the last few months. Bursting with energy & highly infectious rhythms, their storming sound combines smooth reggae grooves with fast paced in-yer-face brassy 2 tone ska. Rasta4Eyes boast a strong DIY ethic & anti-establishment attitude."
Strummercamp.co.uk...
"Fighting out of the St Helen's corner, singer Billy McKelvie delivers food for thought lyrics on how the current economic climate is affecting today's youth just as much as everybody else and how the constant attitude of "we have been here before" from his generations elders just adds to the frustration and fears of himself and his peers.
With a split album (Boss Sounds of the Boom & Bust) now available on Do The Dog records, and a host of nationwide gigs in the pipeline, 2009 looks like being a pivotal time for what we at Strummercamp consider to be one of the most promising young acts playing at this years festival."
FungalPunkNature.com...
"...the response is immediate and in truth, fuckin' magical - ‘Good Old Rock n Roll’ gushes talent and is one of those more slipstream numbers that is happy to go with its own flow and rely on its own self-borne talent found therein."
Punktastic.com...
"It’s a solid four songs that prove both playful and clever. Focus on growing weed and drug dealers sits alongside the ongoing problems with unemployment."
SkaMonkey.com...
"Rasta4eyes bounce in for the first round with ‘Oscar & Arthur’, I love this bouncy skanking feel that they capture with this track with excellent vocals and solid brass section."