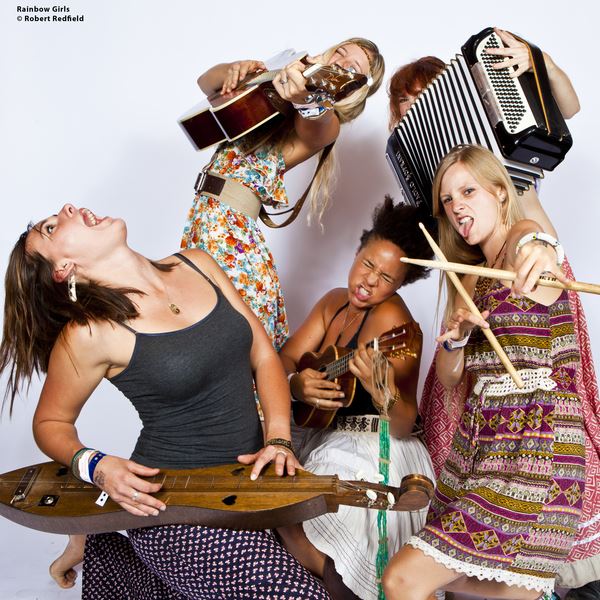 Rainbow Girls is a group of 5-6 female musicians who write and perform original material with roots in folk, americana, gypsy, funk, soul, and rock n'roll. In addition to their soaring 4 part harmonies, these ladies switch back and forth amongst a multitude of instruments including, but not limited to: guitar, ukelele, accordion, harmonica, banjolele, mandolin, dulcimer, bass, cello, piano, melodica, recorder, kazoo, washboard, djembe, drum kit, and stomp-tap percussion. Born in an underground open mic night in Isla Vista, CA called "Bean Night," they began as an acoustic act, busking around the farmers markets of California before they hit the streets of Europe for a summer of couch surfing and busking. Since their return, they have evolved into an electric gypsy-americana-stomp-folk band, complete with drums, bass, and a whole lotta stompin'. They are known to put on one hell of a show. Don't miss Rainbow Girls, acoustic or electric.
Adding colors to the duo Red & Yellow (Caitlin Gowdey & Erin Chapin), Rainbow Girls loosely formed in 2010, playing at a weekly, underground open-mic in Isla Vista. In December 2010, they set off for a week long self-recording trip to Joshua Tree and Big Bear Mountain, where they made their very own 5 song demo. At the end of January, after only a few shows, Rainbow Girls was put on hold while one of the gals skipped town to study abroad in Roma, Italia. Impatient, the three remaining members (at the time there were only 4 colors) followed suit in June, and the group of four spent the summer of 2011 busking and couch surfing their way around Europe, playing gigs and spreading music throughout Switzerland, Germany, England, Italy, the Netherlands, and France. Fifteen cities, six countries, four self-recorded audio tapes, two French recording studios, and 1 deportation later, they are now back at their ranch outside of Santa Barbara, playing gigs around California, and embarking on a series of tours to other states. In Spring of 2012, they toured to Seattle and back for 3 weeks, and again to southern Oregon to play a handful of music festivals. The following summer, Rainbow Girls toured the southwest, adding Arizona, Colorado, and Utah to their list of states. They traveled again to Seattle and back for their (End Of The) WORLD Tour in December of 2012. They recorded and released their first studio EP "Stomp Folk" in the beginning of September, and are currently raising money to finish their first official studio album, due out in Spring of 2013. Rainbow Girls will be hop-scotching around California until April of 2013, when they embark on their southwest tour to SoCal, Arizona, New Mexico, Colorado, and Nevada. They will be heading back across the pond to tour festivals in the UK and Europe this summer!!!