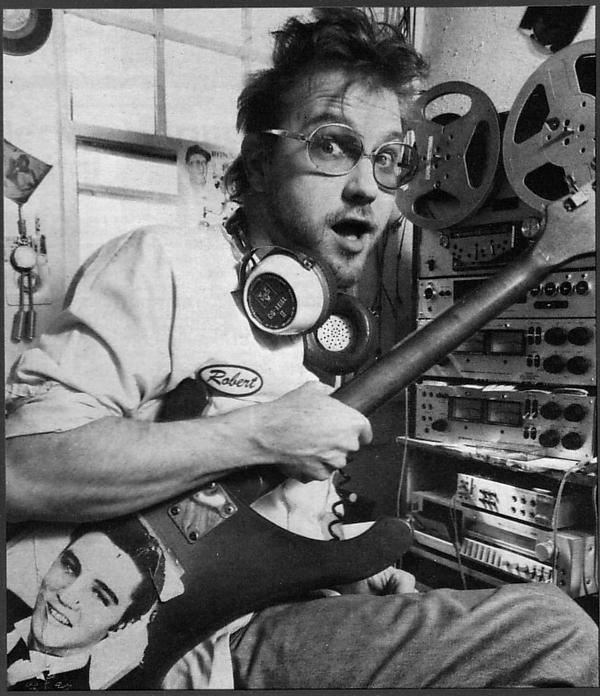 Robert Steven Moore (born January 18, 1952) is an American singer, songwriter, and musician. In addition to having numerous albums released on labels around the world, Moore has self-released over 400 cassette and CD-R albums, as well as dozens of home videos, mostly through the R. Stevie Moore Cassette Club, a home-based label. Moore lives and records in his home/studio in Bloomfield, New Jersey. He is the son of Bob Moore, veteran Nashville A-Team bassist, producer, and orchestra leader, as well as a longtime sideman for Elvis Presley.
In February 2005, newspaper writer Tammy LaGorce described Moore as a "lo-fi legend" in the New York Times.
Moore, born in Nashville, Tennessee, made his commercial recording debut at age seven, singing a duet with Jim Reeves entitled "But You Love Me, Daddy" on the RCA Victor album Songs to Warm the Heart.
Moore was gifted with intuitive proficiency for guitar, bass, keyboards, percussion, and songwriting. In 1966, he began pursuing what would become his lifelong passion, home recording, using a reel-to-reel tape deck set up in his basement. In 1967, he formed his first band, The Marlborough (a rock combo). He also began working for his father as a studio musician, and as an assistant at Mimosa Music, his father's music publishing company.
After dropping out of Vanderbilt University in 1971 to pursue a career as a professional artist, performer and entertainer Moore issued his home-recorded 1976 debut album Phonography on his uncle Harry "H.P." Palmer's HP Music label. The initial run was limited to 100 copies. Trouser Press gave the album rave reviews, calling it "an outrageous collection of musical brain spewage" and "a true slash of genius". Moore moved from Nashville to New Jersey shortly afterwards, his uncle releasing two further collections, The Stance EP, and Delicate Tension in 1978 (Moore's home tape releases continuing at the same time).
In 1996, in a gesture far overdue, "Phonography" was listed among "the fifty most significant indie records" in Rolling Stone's Alt-Rock-A-Rama.
1980 saw an important tape release, Clack!, this time recorded professionally. In 1981, Moore set up the RSM Cassette Club as an outlet for his home-recorded work, making available all tapes recorded by Moore stretching back to 1968, each listed with a 'listenability quotient' rating from 1 to 10.
The next LP release was 1984's What's The Point?!! and in the same year Paris' New Rose Records issued a double album compilation, Everything You Always Wanted To Know About R Stevie Moore But Were Afraid To Ask. The label described Moore as "one of the best songwriters of all time".Everything proved particularly popular in France, with a single "Chantilly Lace" from the album becoming a minor sleeper hit there, and prompting Moore to undertake a promotional visit to the country, where he was welcomed with not insignificant adulation and press-buzz. Further albums followed in the 80s, including Verve, Glad Music (this time recorded in a professional studio), (1952-19??), and Teenage Spectacular (described by Moore then as "the most enjoyable project of my career".)
During the 1980s Moore appeared sporadically on the Uncle Floyd TV show, a tongue-in-cheek, public-access style clown, puppet and variety show that broadcast out of New Jersey.
Moore was an early on-air personality at WFMU, an independent free-form radio station out of New Jersey.
Around 1988, Moore started working in home video, and he is now active on YouTube and MySpace.
The advent of CD-R as a medium for self-issued music brought Moore and his fans new enthusiasm for his home recording, and in 1999 the cassette club became the "R. Stevie Moore CDR Club" (CDRSMCLUB).
In 2002 Moore recorded an album with Half Japanese frontman Jad Fair, titled FairMoore, described as "a lovely, heartfelt effort that shows both in top form" by Dave Mandl, who stated that it "brings together two fiercely original figures in the American music underground", the album consisting of Fair reciting his poetry over Moore's instrumental backing.
Throughout the 2000s Moore, has continued to issue more official CD's released on various independent labels around the world. He also worked on several mail collaborations with Terry Burrows (aka Yukio Yung), Ariel Pink, Lane Steinberg and others.
Moore contributed a track to the 2007 Worried Noodles compilation on Tomlab, alongside David Byrne, Deerhoof and Liars, compiled by British artist David Shrigley. Shrigley also interviewed Moore for BOMB Magazine magazine that year.