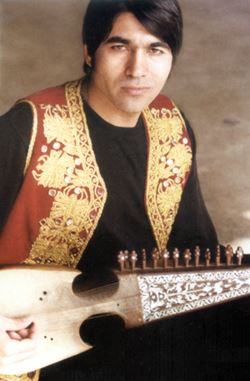 Twenty years of war and the Taliban’s systematic repression have taken an incalculable toll on Afghanistan’s instrumental music world. With a little searching, you might be able to find historical field recordings from thirty years ago, or current synthesizer pop music made in the Afghan diaspora. But as the world music scene continues to explode around the globe, the vitality and immediacy of traditional Afghani artists making traditional Afghani music for our times has been conspicuously absent.
Until now.
Quraishi’s father made him his first rubab, an ancient instrument belonging to the short-necked lute family. It is traditionally made with a single piece of mulberry wood with a skin face, often richly ornamented with inlay of bone and ivory, and even occasionally encrusted with lapis lazuli or mother of pearl. There are typically three melody strings (now usually made of gut or nylon) and as many as twenty sympathetic strings that are variably tuned to the modes or ragas, imparting a deep resonance and unique timbre to the national instrument of Afghanistan.
Indeed, his family lineage and earliest influences include musicians and instrument makers. While growing up in Kabul, the self-taught artist quickly became well-versed in the folk styles and regional genres of the numerous ethnic groups, including the Pashtu, Uzbek, and Tajik. Quraishi also steeped himself in the discipline and formalistic principals of classical Hindustani music theory that constitute the foundation of Afghanistan’s art music.
Unique in its richness, range, and variety, Afghan music evokes a strong sense of place. You can hear the land in the intricacies of the music, from the vastness of wild mountains in the rhythms to the loneliness of the desert in the melodies. And while an Indian influence can be heard in the ragas and instrumentation, China and the Far East are also evident in the simple and haunting strains of pentatonic scales. But if one listens closely, there is also the hint of something more—the minor scales of the Middle East and the intricate melodies that intertwine like Greek rebetika recall the playfulness and invention of Celtic music, the soulfulness of the American blues, and even the improvisations of modern jazz.
Quraishi is joined on Pure & True Rubab by Chatram Sahni, a drummer par excellence who served his apprenticeship playing on 1970’s Afghan radio. A favorite accompanist for all the famous Afghan singers, Chatram plays all the traditional rhythms on the dhol, a tunable double-headed Afghani drum, also usually made from mulberry wood with a goat skin stretched over both ends.
It is astonishing how only two musicians engaged in musical conversation can coax so much sound and feeling and so many variations from such simple instruments. At times, the rocking back beat will make you want to dance ecstatically, the result of the musicians steadily increasing the tempo—that is, until they decide to have a little fun by stopping in mid-song Loggari-style. At other times, meditative call-and response phrases are repeated between the musicians with a depth of feeling that creates the hypnotic and mesmerizing trance of a Sufi Zikar, connecting the music back to the mystical Sufi poets. After all, Rumi was not Turkish—he was Afghani.
Technically, Quraishi possesses a masterful sense of rhythm and an acute ear, but it is his poetic heart that moves the listeners of Pure & True Rubab. His sensitive interpretations of the classical repertoire (“Herati,” “Valley,” “Badakshi,” “Qalin,” “Jani-ba-Lab,” and “Ashoqi”) are infused with the fresh and youthful expression of his original compositions (“Meg” and “Hope”). Quraishi’s performances form a living and vital link between the rich tradition of the Afghan classical court music, the golden years of Afghan radio, the musical realities of today’s diverse immigrant communities, and the future of a nation’s musical identity.
No electronic effects here—just virtuosity.
EverGreene Music :: Official Artist Website