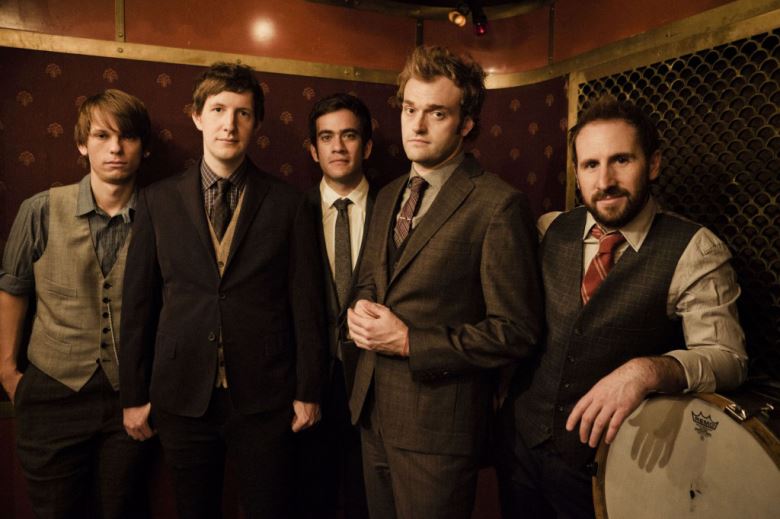 Punch Brothers are a progressive bluegrass band formed by Chris Thile in 2006. The band consists of Chris Thile (mandolin), Gabe Witcher (fiddle/violin), Noam Pikelny (banjo), Chris Eldridge (guitar), and Paul Kowert (bass). As performing and recording artists, composers and interpreters, technicians and stylists, they continue to push the boundaries of possibility while maintaining an unerring devotion to the basic audience experience.

In the 2009-10 season, the band visits a long list of venues including Stern Auditorium at Carnegie Hall (where they debuted in Zankel Hall in 2007), the Somerville Theater in Boston, Old Town School in Chicago, the Herbst Theater in San Francisco, UMS Ann Arbor, Duke University, the University of Wisconsin in Madison, and many others. They have performed recently in nearly every conceivable format and space, from small clubs (they have a regular series at the Living Room in New York and have played frequently at Largo in Los Angeles) to concert halls (Benaroya Hall in Seattle, Sheldon Hall in St. Louis, Mondavi Center in Davis, Pabst Theater in Milwaukee, the Allen Room in New York, in addition to Carnegie) to festivals of all kinds (Bonnaroo, Ravinia, Aspen, Telluride, Spoleto, Savannah, Chamber Music Northwest). Their shows include an unpredictable mix of original songs written by the band, the 4-movement chamber suite The Blind Leaving the Blind (composed by Thile), traditional bluegrass and folk tunes, arrangements of Bach and Mozart, and covers of Radiohead, The Beatles, The Band, The White Stripes, The Strokes, and multiple other sources. In the fall of 2011, the band embarked on a tour opening for music legend Paul Simon, occasionally accompanying him on "The Boxer."
Punch Brothers return with their second album, Antifogmatic, June 15 on Nonesuch. The record is the follow-up to the band’s highly praised 2008 debut, Punch, which The New Yorker calls “...wide-ranging and restlessly imaginative...” A special deluxe edition of the album will also be available. Included in this package is a four song instrumental EP, All of This Is True, as well as a seven song DVD, Live from the Lower East Side: It’s p-Bingo Night!, which was filmed during the band’s residency at NYC’s The Living Room. Pre-orders of both the standard and deluxe editions are available now at www.nonesuch.com and www.punchbrothers.com. The first 500 orders of the deluxe edition will include an autographed official Punch Brothers cocktail recipe guide.

At home in a dizzying array of settings even outside of their expansive core activities, Punch Brothers are the subject of an upcoming feature-length documentary called How to Grow a Band, have appeared on the Tonight Show with Jay Leno, and were among three finalists in ESPN’s cut-throat, fan-voted battle of the bands in interpretations of “Take Me Out to the Ballgame”. The band members’ diverse backgrounds and extraordinary talents make the group impossible to describe and thrilling to experience.

Chris Thile has changed the mandolin forever, elevating it from its origins as a relatively simple folk and bluegrass instrument to the sophistication and brilliance of the finest jazz improvisation and classical performance. In the 2009-10 season, he premieres his Mandolin Concerto with six orchestras in the US. For more than 15 years, Thile played in the wildly popular band Nickel Creek, with whom he released three albums and sold two million records, was awarded a Grammy® in 2002, and traveled the world on sold-out concert tours. As a soloist he has released four albums, as well as performing and recording extensively as a duo with double bass virtuoso Edgar Meyer and with fellow eminent mandolinist Mike Marshall. He has written a duo for Meyer and pianist Emanuel Ax; recorded with Yo-Yo Ma, Renee Fleming and Joshua Bell; and collaborated with a pantheon of bluegrass innovators including Bela Fleck, Dolly Parton, the Dixie Chicks, Jerry Douglas, and Sam Bush.

Although initially drawn to the electric guitar, by his mid-teens Chris Eldridge had developed a deep love for acoustic music, thanks in part to his father, a banjo player and founding member of the seminal bluegrass group The Seldom Scene. Eldridge later gained in-depth exposure to a variety of different musical styles while studying at Oberlin Conservatory, where he earned a degree in Music Performance in 2004. During his time at Oberlin, Eldridge studied with legendary guitarist Tony Rice. Before joining Punch Brothers, he was a founding member of the critically acclaimed bluegrass band The Infamous Stringdusters.

Paul Kowert is from Madison, WI and graduated from The Curtis Institute of Music in Philadelphia. As a classical musician Paul has performed with various orchestras as a soloist and as a section member, most recently playing in the Verbier Festival Orchestra in Switzerland in the summer of 2008. He was one of the performers at Edgar Meyer’s Carnegie Hall workshop in 2006, and since then has appeared in concert with Darol Anger’s Republic of Strings, Tristan and Tashina Clarridge, Alex and Tatiana Hargreaves, Futureman’s Black Mozart Ensemble, Jordan Tice, Brittany Haas, and Jeremy Kittel. Paul can be heard as a member of the “Big Trio” with mandolinist Mike Marshall and violinist Alex Hargreaves, a group that released its first album in spring 2009.

Noam Pikelny (born Noam Pikelny) hails from Chicago, IL where he picked up the banjo at the age of 8. He studied old-time and bluegrass banjo at the Old Town School of Folk Music. Throughout high school, he played all over Illinois and Indiana with several traditional bluegrass bands, who occasionally required him to wear a uniform. Noam studied music theory at the University of Illinois, Champaign-Urbana. In 2002, he became the principal banjoist with the award-winning Colorado ensemble Leftover Salmon. His debut solo record, In the Maze, was released on Compass Records, and though it did not have much success on the billboard charts, it made a splash in the world of postmodern progressive three-finger style five-string banjo. He relocated to Nashville, TN in 2006 to play with New Grass Revival bassist and vocalist John Cowan. He starting performing and recording with mandolinist, fellow Cubs fan, spiritual advisor, and life coach Chris Thile in the fall of 2005. Noam relocated to Brooklyn, NY in the spring of 2008.

Gabe Witcher began his musical training at age five, learning classical violin and bluegrass fiddle simultaneously. By age six he was performing professionally with his father in the bluegrass band The Witcher Brothers; over the next decade, he gained renown as both a member of that group and as a multiple winner on the California competition circuit. In 1994, Witcher was recruited by veteran musician Herb Pedersen to fill the shoes of three-time national fiddle champion Byron Berline in the group The Laurel Canyon Ramblers. By age 17, Witcher was recording for heavyweights such as Randy Newman, Bernie Taupin, and producer Don Was. He has since contributed to more than 300 records and countless movie and television scores, including 2006 Oscar® winner Brokeback Mountain. Over the last five years, he has solidified his place at the forefront of the progressive acoustic music scene by playing with 12-time Grammy® winner Jerry Douglas.