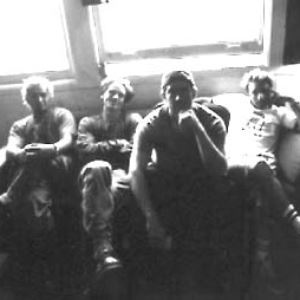 There are, at least, two artists named Polarbear (none to be confused with Polar Bear).
1) A spoken word artist / poet (b. Steven Camden, Birmingham, UK, in 1979 - with an overly large cranium). In 2008, he remixed Dan Le Sac vs Scroobius Pip's Letter From God To Man & in 2010, released Accidental Powercut 1. He has ideas / writes them down & moves around whilst relating them. He likes peach cobbler & Maradona. He's apathetic, as regards, costume drama & salt-fish.
Soon after birth, doctors - considering his cranium - gave the diagnosis of ‘water on the brain’, but the young boy seemed to respond well to stimuli & was sent home, with his mother. Over the following seven years the boy developed a style of living which incorporated certain allowances, for his oversized head, inc: standing at the back in group photographs, not standing in the line of the sun whilst around sunbathers & avoiding running downhill. All seemed normal until in the summer of 1986 the young boy witnessed two events, that changed his life: the artistic expression of Diego Armando Maradona & a four hour Arctic Circle documentary (narrated by David Attenborough). He became obsessed with two things: polar bears & majesty of, a perfectly executed, pitch-long dribble. Then his mother noticed an interesting phenomenon - her son’s specially constructed balaclava seemed to be less tight & he seemed to leave his horizontal TV-watching position, with greater ease, on Saturday afternoons (after A-Team). She took him to her doctor, who told her that a shrinking of the cranium was a near impossibility & there must be some other explanation for her perceptions - wishful thinking perhaps. Unconvinced, she took him to a reclusive wizard, who operated in the area in the guise of a ‘Holistic medicine Practitioner’. Said wizard examined the boy closely, over a period of three days, setting the boy numerous tasks & puzzles. After the three days our wizard showed the mother a he'd dossier composed, on her son, stating: the boy possessed immense physical skill, observation & rhythm - seemly, the result of unknown slow-release ‘essence’, within the brain. It seemed that the boy was able to capture the heart of a story, plus, using balance, rhythm & skilful delivery, somehow relay that story back in a mazy run, defying restraint - The wizard told her, that this was the reason, for the reduction in head size. When the mother expressed concern, vis the condition's long-term effects - the wizard reassured her, if he was correct, upon reaching puberty her son would develop a means of sustaining this essence - with one proviso - he must be given a means of artistic release. The mother agreed, buying her son his first pencil & notepad. She thanked the wizard for his help & before leaving, asked him about the polar bear fascination. He replied, "All gifted souls must choose their own ideal physical form. Your son has chosen wisely."
Official site: http://HomeOfPolar.com
2) Formerly, Los Angeles, USA side-project of Eric Avery (ex. Jane's Addiction bassist) & Biff Sanders(ex. Ethyl Meatplow). Mostly recorded in Motiv (downtown LA studio). Many JA fans consider "Why Something Instead of Nothing?" (re-released 2004), to be the best post-Jane's Addiction work, by any original member. They, also, recorded a self-title EP (1996) & Chewing Gum EP (1997).