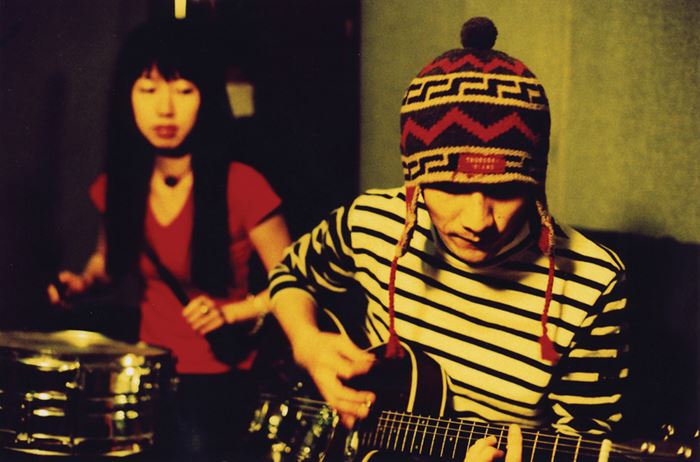 1. A French Postpunk/Coldwave band.
https://www.discogs.com/artist/2044807-Plastic-People-4
2. Plastic People, the folk rock band capturing people’s ordinary life from a warm perspective, came back with the third studio album [Snap] after two years. Min Kyu Kim of Plastic People founded the label Electric Muse in the winter of 2006 at the same time with the release of the second album [Folk, Ya!] and has been focusing on producing albums of other bands; “thanks to” his dedication to producing, Plastic People had about a year-long break.
Plastic People started performing actively after participation in the compilation album [Hello, This is Cavare Sound] in 2002 with a song called “She Said” and released the EP [Plastic People] in 2002, first album [Songbags of the Plastic People] in 2003, EP [Travelling in the Blue] in 2004, and the second album [Folk Ya!] in 2006, garnering much attention with folk rock songs like “Love Song at the Crossroads,” “Airport Man and Woman,” “3 PM,” “Blank,” The Incomprehensible Taste of Coffee.”
Snap
Plastic People’s third album [Snap] started from a picture from the past. Frosty weather in the winter, contrasting colors of white snow and the charcoals in the village of charcoal factory, children having fun around the frozen stream, and the smiles of those children on their faces with charcoal soot. Plastic People thought of the snap shot as they were coming up with ideas for the new songs in the winter of 2008, and started working on the third album from the warmhearted and yet chilly feelings of the picture.
They started on the third studio album in the winter, 2008 and completed in the following year. Jae Hwan Ahn (guitar), Tae Sung Park (bass), Ju Hyun Yoon (drum), who participate from the second album as session players, all took part again, and the musicians from the same label Seung Hoon Choi from Orgeltanz, Won Gu Kim, Shin Woo Jung, and Horah from Oyster Boys all helped out.
In the third album [Snap], through twelve songs, Plastic People tried to incorporate our feelings of everyday life that are so plentiful and yet so common that it’s easy to forget. “Standing in the Shade,” grasping the scenery of the city, “In Places,” a travelogue of a lower middle class who wants to escape from the daily routine, “Summer Among Ourselves,” a lousy camp song on the shorelines of the summer, “B/W Picture” that provided the first step for the concept of the album; Plastic People captured all the four seasons in their songs as if they were taking snap shots.
The diversity of the third album [Snap] is a distinctive feature this time; acoustical tracks like “Singing Moon,” full of imagination characteristic for Plastic People, “구름게으름민요,” a pastoral folk song and also a present from Atombook’s sp, “In Places,” rearranged from the instrumental piece offered to “Yamu Yamu Cham Cham,” a kid program on EBS, and rocking tracks such as “A Day is Well Found in a Joke,” an homage to indie/rock n’ roll era of C86, “History,” expressing the affection for psychedelic rock, and “B/W Picture,” a slowcore song led by electric guitar are put together in one album.
We worry if we’re living productively when the time flies by, and Plastic People sympathize and tell us. “It’s ok to live a day totally self-indulged!”
Discography
1st EP [Plastic People] (2002)
1st Studio Album [Songbags of the Plastic People] (2003)
2nd EP [Travelling in the Blue] (2004)
2nd Studio Album [Folk, Ya] (2006)
3rd Studio Album [Snap] (2009)
[Hello, This is Cavare Sound] (2002) (“She Said”)
[Club Bbang Compilation 2] (2003) (“A Night Trip”)
[Christmas Meets Cavare Sound] (2004) (“Christmas is All Around”)
[Club Bbang Compilation 3] (2007) (“Morning After”)
www.plasticpeople.co.kr
www.myspace.com/bandplasticpeople
club.cyworld.com/electricmuse
www.myspace.com/electricmuse