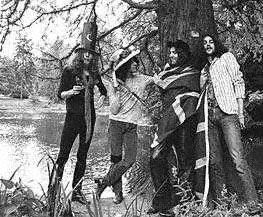 The Pink Fairies were a British rock music group active in the London underground scene of the early 1970s . They promoted free music and anarchy and often performed impromptu gigs and other agitprop stunts. The band led by Paul Rudolph on blues guitar and two drummers: Twink, and Russ Hunter; it went through many different line-ups of band members over the years.
The Pink Fairies evolved out of a drinking club formed by Steve Peregrin Took (formerly Marc Bolan's partner in T Rex, the Pretty Things, the Deviants also called the "Social" Deviants) and Syd Barrett in 1969. Took, along with Mick Farren and Twink (previously of The Fairies, Tomorrow, and Pretty Things) named the group Pink Fairies, only to see Twink appropriate the name for his new project (Pink Fairies Mark 2) with three ex-Deviants members. Mick Farren's first solo album, Mona, features the original Pink Fairies Mark 1 line-up.
It is worth noting that according to Jason Ankeny of All Music Guide, "the Social Deviants...consisted primarily of vocalist Mick Farren, guitarist Paul Rudolph, bassist Duncan Sanderson and drummer Russell Hunter. The group also featured satellite members Marc Bolan, Steve Peregrine Took and players from the band Group X, later rechristened Hawkwind."
After the "Mark 2" version of the band broke up in 1972, a new version (Mark 3) formed which, eventually adding ex-Steve Took's Shagrat guitarist Larry Wallis, who took over the band them, leading them on the Kings Of Oblivion LP. Wallis was simultaneously in both the Pink Fairies and the original line-up of Motörhead with ex-Hawkwind bassist Lemmy, and, co-incidentally enough, also substituted for Lemmy on a Hawkwind tour of America at the last minute because Lemmy was deported back to England because of possession of amphetamine sulfate.
Although never in an official line-up of the Pink Fairies (after Mark 1), Took continued to be associated with the Pink Fairies. He played support slots for the Pink Fairies and occassionally joined them as a third drummer, and once on bass guitar.
Members of the Pink Fairies and Deviants were largely interchangeable throughout the years. A more recent member of the Deviants, (Andy Colqhoun) appeared with Larry Wallis, Twink, Russell Hunter and Duncan (Sandy) Sanderson for the later Fairies reunion album, Kill 'Em & Eat 'Em.
"In 1975, the Kings of Oblivion-era line-up reunited for a one-off London gig; an enthusiastic response led to the official reformation of the nucleus of Rudolph, Sanderson and Hunter, who added former Chilli Willi and the Red Hot Peppers vocalist Martin Stone before again disbanding in 1977. A decade later, the original line-up -- minus Rudolph, but including Wallis -- reunited for the album Kill 'Em and Eat 'Em before calling it quits yet one more time. "~ Jason Ankeny, All Music Guide.
Fairies haven't released any music to the general public in the last several decades. However, reissues of '60s and '70s material and more contemporary jams--of arguably lesser interest--have made it into limited pressings--around 1,500--have been distributed by a loose network of smaller distributors, band members and friends. These albums have featured Twink and one or two other old Fairies members, several of whom were living in Canada, according to graphic novellist Link Yaco, who found Paul Rudolph there in 1999, willing to endorse "Spacechicks and Businessmen", an x-rated graphic novel. Rudolph's endorsement appears on the cover of the book.
The first European excursion for The Pink Fairies saw them blowing amps, money and minds at the three-day Ruisrock Festival in Turku, Northern Finland in 1971. Recorded by the state radio station, the three-piece, now without Twink, consisted of Russell Hunter on drums, Paul Rudolph on guitar and vocals, and Duncan Sanderson on bass. Unleashing heavy, acid-drenched jams on the audience, beginning with a blistering attack on The Beatles’ psych classic Tomorrow Never Knows, the Fairies must have blown away the opposition – Juicy Lucy, Jeff Beck, Canned Heat and Fairport Convention – with sheer force.