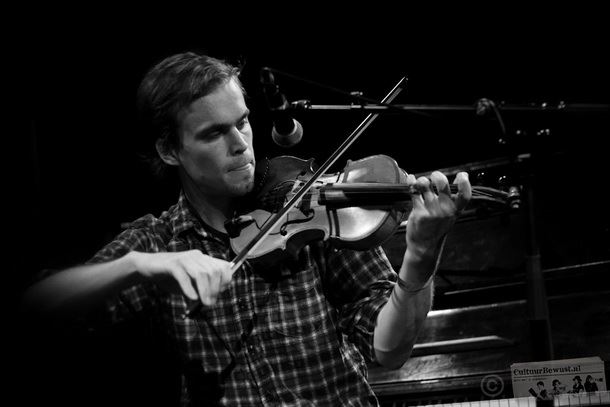 Peter Broderick (b. 20 Jan 1987 in Portland, Oregon) is a US musician and composer. He has been a member of Efterklang. He played and/or toured with several ensembles including Horse Feathers, M. Ward, She & Him, Norfolk & Western and Laura Gibson. His solo work is quite varied, but is often grounded by piano and/or strings.
Broderick he grew up in a small town of Carlton, near Portland, Oregon. Coming from a musical family, he started violin lessons at age 7, and in high school became interested in all different kinds of instruments. He started to play piano, guitar, banjo, mandolin, musical saw, and anything else he could find. After high school he moved to Portland, OR, where he studied music theory and filmmaking. During this time he began to play in multiple bands around town, and was able to establish himself as a regular session musician at various recording studios for artists like M. Ward.

In late 2007 he was miraculously invited by some of his musical heroes, the Danish band Efterklang, to move to Copenhagen and join the live band. So he did, and since then he has toured with the band all around the world, playing hundreds of concerts, and opening many of them as a solo act.

Since this move he has released several solo recordings as well. Starting with a few primarily instrumental, piano-based releases in 2007, then branching out into a completely different world with the more folky ‘Home’ in late 2008, which has all but established Broderick as the young composer to watch – with critical acclaim from music magazines (NME/Mojo/Uncut) and broadsheet press alike. ‘A precociously talented, classically trained multi-instrumentalist’ – The Independent / ‘A songwriter of beguiling depth' #19 Album of 2008 – The Sunday Times
2009 saw his first major release, ‘Music for Falling From Trees’, a 30-minute piece, in seven sections, created for a contemporary dance by London-based choreographer Adrienne Hart (Neon Productions). Adrienne was looking for a score of piano and strings, so he left the guitar and his voice aside and focused entirely on those two timbres. ‘I decided to take this literally and make a rule not to use any other instrument. In the script it called for the sound of a ticking clock. I made this sound by tapping on the body of the violin with my fingernails.’ The dance tells the story of a man in a psychiatric hospital, and his struggle to maintain his identity. The music is sometimes melancholic, sometimes playful, sometimes chaotic, but with the combination of piano and strings, full of beauty, reverence and awe. The dance premièred at The Place, London, on January 21st, 2009.
His album "‘These Walls of Mine" was released in 2012.