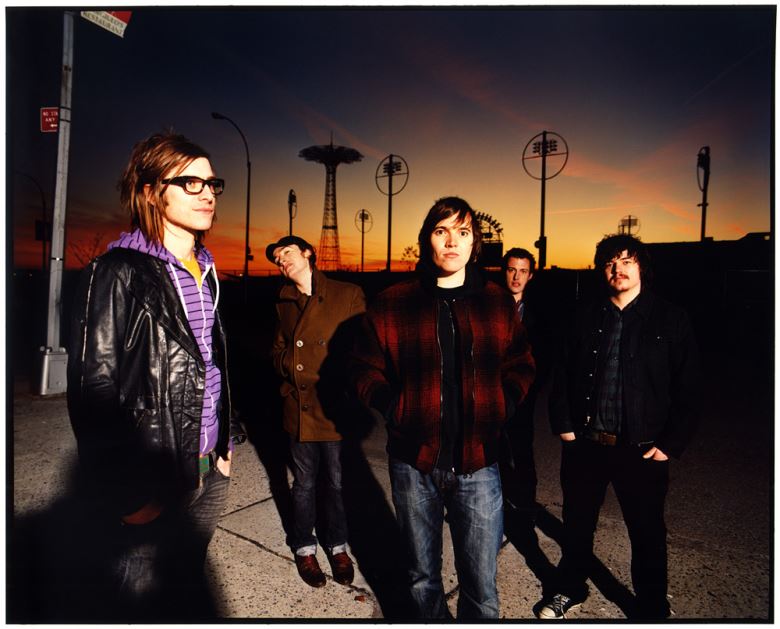 People in Planes is an alternative rock group from Porthcawl, Wales which formed in 2000. Previously the group was known as Robots in the Sky, and later Tetra Splendour before settling on People in Planes. The band consists of Gareth Jones (vocals, guitar), Pete Roberts (guitar), Kris Blight (bass), Ian Russell (keyboards) and John Maloney (drums). They are best known for such songs as "Barracuda", "If You Talk Too Much (My Head Will Explode)" and "Last Man Standing"
When the Welsh rock quintet People in Planes came upon their band name, they knew that it expressed their sound — modern yet human, with a global reach and sense of transit and adventure — and the philosophy behind the music they create. But little did they know that it would also prove to be prophetic.
Instead of rising through the often-fickle English pop music scene, People in Planes forged their own version of a British musical invasion when they caught the ear of New York-based Wind-up Records during a transatlantic musical voyage that launched their career. First, with an introductory EP and the alternative/college rock chart single “If You Talk Too Much (My Head Will Explode)” — hailed by Billboard as “a first burst of brilliance” — the band quickly caught American ears (as well as eyes with a video directed by Joaquin Phoenix). They followed with their debut album, As Far As The Eye Can See…, which Decoy praised as “a near-flawless, jaw-dropping piece of modern rock,” and toured the U.S. with such diverse acts as The Bravery, Blue October, VHS or Beta and The (International) Noise Conspiracy.
Songwriters Peter Roberts and Gareth Jones met in primary school (famously by one accidentally smashing a tennis ball into the others face) and a friendship as well as a potent creative collaboration was born. In their early teens, the pair were entranced by the first Supergrass album, I Should Coco, and resolved to forge their own path into making music by forming a band. “They were not too dissimilar to us in age, so we could really relate to what they were doing,” says Jones. “The first seeds of what we became were sown by that record,” adds Roberts.
Musical collaborations started in the wake of the Brit Pop explosion, and were fueled by the foundations of a mutual love of Neil Young, Dylan, Pink Floyd and Beck; and by a common thing to bring like minded people together when pursuing the dream of a life in music in a small town-drugs. Thus four like minded pot head kids- Gareth (piano), Peter (guitar), Kris (bass) and John (drums) formed the first incarnation of the band-‘Robots In The Sky’ releasing a psychedelic double A side single on local Cardiff label Complete Control (exclusively on red 7” vinyl), and quickly leading to a deal with majors EMI/CHRYSALIS but ultimately the demise of this first stage of the band- as following the release of their first full length as Tetra Splendour (entitled Splendid Animation), they were dropped in a corporate reshuffle.
“We felt like we were rock stars at the time, but you eventually realize that you can't trust anyone,” Jones observes. Not to be daunted, they retrenched and refined their music, and began to record with producer Sam Williams, whose credits include the group’s touchstone Supergrass album I Should Coco. Working with Williams was the first experiment for the band in entrusting their arrangements to another party, but was one which was entirely liberating, and succeeded in precipitating a work that was challenging and atmospheric to the band, whilst essentially sealing them a deal with Wind-up records in mid 2005 (following their triumphant US debut at the Mercury Lounge in New York). Williams also inspired the switch in line-up, convincing Jones to take on more of a front man roll, and introduce keyboard player Ian Russell (also old school friend of the rest) to make up the five piece that is People In Planes today. They hit the ground running in America, playing the South By Southwest and CMJ music festivals and winning over American audiences on record and radio as well as live performances and an appearance on “Late Night with Conan O’Brien” as well as “Jimmy Kimmel Live.”
The making of their second album as PIP reflects their intuition for making diverse music in its very essence as they worked with four producers in seven different studios across America, England and Wales in a quest to create something musically and sonically diverse. Initial sessions with Our Lady Peace front man Raine Maida provided the creative building blocks to lead on to sessions with Queens Of The Stoneage collaborators ‘Eleven’, Panic At The Disco producer Matt Squire and finally Doves/Massive Attack producer Dan Austin who was long term friend of the band’s from working together as Tetra Splendour and on early demos for what would become As Far As The Eye Can See. This returning to record in the UK proved to be the key to bringing together the widely varying influences they had picked up in the American sessions, and ultimately provided the setting- Pete’s bedroom- for much of the sense to be made of it all, and for a triumph in the illusive art of making rock records in a home studio environment.
The secret for achieving their goals so far can be divined in their music: grounded in classic melodiousness and songwriting craft as well as suffused with hooks, yet with a sense of musical adventurism matched by a hard-rocking drive and a gift for spectral balladry. Woven through it all are lyrics that eloquently explore the realms of emotions, relationships and human existence here in the modern age. “A scary age, and therefore an exciting age”.
People in Planes are mainly concerned with living to see another day.
‘As Far As The Eye Can See’ and ‘Beyond The Horizon’ are available in stores now.
www.peopleinplanes.com.