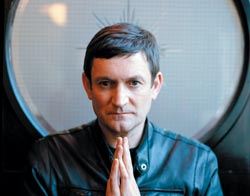 Paul David Heaton (born May 9, 1962) is an English born singer and songwriter. He was a member of The Beautiful South, and a former member of indie band The Housemartins, who disbanded in 1988.
Paul Heaton formed The Housemartins in the early 1980s. The Housemartins released a number of singles and two studio albums, London 0 Hull 4 and The People Who Grinned Themselves to Death. Their most famous hit was an a-capella version of the Isley Brothers' Caravan of Love, which was a Christmas number one in the UK.
In 1988, Paul Heaton formed The Beautiful South from the ashes of The Housemartins. The Beautiful South released two top ten singles, Song for Whoever and You Keep It All In, which featured Irish singer Briana Corrigan on vocals. In 1989, the band released an album "Welcome to the Beautiful South" by which time Corrigan had joined the band as a full time member. The band's biggest success to date is the release of the single "A Little Time" in 1991. It reached number 1 on the charts. In 1993 the band released their third album, "0898 Beautiful South".
In 1994, Briana Corrigan left the band and a new female vocalist, Jacqui Abbott, was brought in. During the recording of the band's fourth album "Miaow", Heaton was increasingly irritated with the band and at one time told them to get their act together or he would leave. "Miaow" is some of Heaton's most depressing songwriting (only their fifth studio album, "Blue Is The Colour", is considered sadder). Heaton was going through a break-up with his girlfriend and other problems at the time. After the release of Miaow's third single, "Prettiest Eyes", the record company was worried about the band's sales, so they proposed a greatest hits release to save the band. Heaton hated the idea as he was trying to keep the band as far away from mainstream as possible, but nevertheless, "Carry on up the Charts" was released in December 1994 and it sold overwhelmingly, going platinum and becoming one of the biggest selling albums of all time in the UK.
The band returned to form a number one album, "Blue Is the Colour". Their sixth album, "Quench", also hit the top spot. In 2000, after the release of "Painting It Red", Jacqui Abbott left the band to care for her son. A second compilation album, "Solid Bronze", was released and two more studio albums with a new female vocalist, Alison Wheeler. The first, Gaze, became the first Beautiful South album to fail to reach the top 10, and the band were then dropped by Mercury Records.
The following year (2004), newly signed to Sony, they released the curiously named covers album Goldiggas, Headnodders and Pholk Songs, an eclectic album that featured the Beautiful South's unique take on a wide variety of tracks by the like of ELO, Blue Öyster Cult, John Travolta and Olivia Newton-John, S Club 7, and Rufus Wainwright. Again, despite considerable publicity and promotional TV appearances, the album failed to make the top 10.
2006 saw the release of yet another album of new material, "Superbi." Reviews were generally positive. "Superbi" has more of an alt-country sound (plenty of slide guitar, for example) than previous Beautiful South releases. The album maintains the band's trademark eccentricity, however, featuring a dobro on one song.
On the ITV documentary music series Faith & Music screened 29th October 2006, Paul talks openly and honestly about his atheism and his battle with alcoholism.
Heaton is the father of two daughters, although he has never married.
www.paulheatonmusic.co.uk