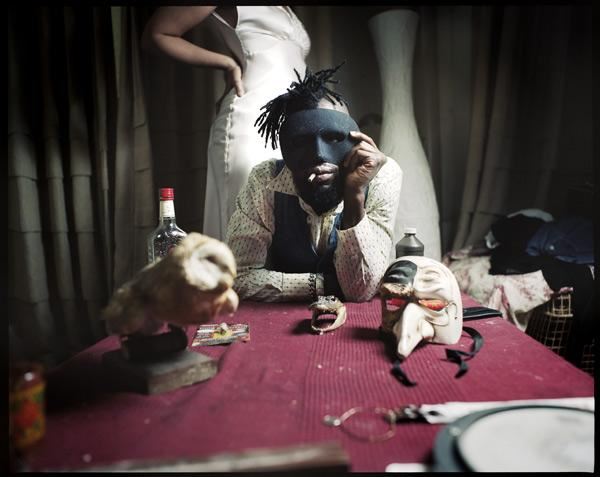 You can tell a lot about a band by how it performs offstage, as was my initial experience of Paris Suit Yourself on Thanksgiving last year. The three expatriate band members made a surprise visit to my Berlin apartment after hearing word of an American feast, hours after dinner and just in time for the vodka. Like the band's music, their behavior was as charming as it was abrasive. Drummer Joseph Heffernan, who hails from Arkansas and intentionally, if not performatively, assumes that anyone from north of the Mason-Dixon Line is from Connecticut, managed to rile up the majority of my guests and incite some to take off early. Meanwhile, Luvinsky Atche and Victor Tricard, respectively the singer and guitarist, from Paris and Bordeaux, enthralled the remaining company with an enthusiasm for Rilke and the underbelly of German history: "Putin lived in East Germany in the 80s, working under the name Adamo-something, and cried like an angry baby when the Wall came down," Atche mused while chewing on the remains of dinner.
This mixture of gall and grace made more sense a few days later, when I first saw Paris Suit Yourself perform. Onstage, the band's chemistry fuses the bonafides of gospel with the fiery theatrics of early punk rock, as if Atche invokes the haunted vocal grooves from Archie Shepp's "Attica Blues," bolstered by strained rhythms echoing the DKs' "Holiday in Cambodia." All of that's wrapped in a handsome wardrobe, and instilled with a techno flow that colludes the deviating sounds.
..
One performance began with the bassist, Paris-based Marie Boye, leading a crab-walking, hooded Atche on to the stage by a leash, all singing, "You can touch my private parts." Later, there were mellifluous, trance-induced chants, distraught tantrums that saw mic stands tossed and thrown, and dancehall-inflected raps - a combination that defies genre and often sends an audience into a frenzy of fascination, and sometimes frustration. At a performance last week, one patron huffed with pouty lips, "What is this shit?" She was splashed with a fountain of water from onstage, and retreated upstairs into the solace of late-night DJs, where she was later seen dancing with a new, dry outfit.
In spite of their off-the-cuff style of performance, or even the glibness of their name, Paris Suit Yourself is deeply sincere about their sound, and aim to transform our collective notion of violence. "Brutality without elegance is like trying to fit a square inside of a circle... a waste of time, and a good way to render yourself ridiculous," Boye says. "In a more or less controlled way, we try to make the audience re-become animals while remaining ourselves at the height of their dignity."
But don't stare too hard at the band's pulpit, as there's still fun to be had. For instance, why the name Paris Suit Yourself? "Who knows," Boye says. "We should probably change it to Paris Berlin Arkansas Suit Yourself But Take The Fucking Plane. But that's way too long."