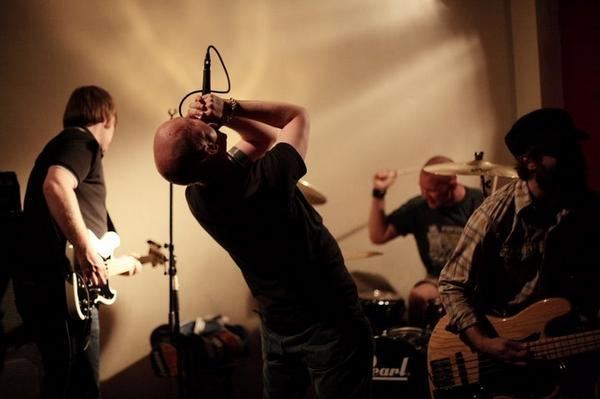 There are two bands with the name Palehorse ;
1.) London two-bass heavy band
2.) Connecticut Hardcore Band
1.) The London band Palehorse formed in 2000 out of the ashes of three U.K. Hardcore bands Abjure, Kneejerk and Sunstarvedday. The original lineup consisted of Sandro Ferramacho-Vocals (Sunstarvedday), Seedi-Vocals (Abjure, Thanksfornothing, Garuda, Armed Response Unit) Tom Fowler-Bass (Abjure, The Record Buying Public, Million Dead) John Atkins-Bass (Sunstarvedday, The Record Buying Public, Queen of Swords, The Aftermath) and Ben Dawson-Drums (Kneejerk, Million Dead, Armed Response Unit, Queen of Swords, Mothlite, Thanksfornothing, Sunstarvedday, The Aftermath and Mongol Horde).
The band played their first gig at the now defunct Red Eye club on Copenhagen Street in North London and started to beat audiences into submission with their extreme volumes and crushing riffs. One of the first casualties of the extreme nature of the band was vocalist Sandro who developed tinnitus to an extent that he was unable to perform with the band any more.
2003 saw the band release their 5K (Kerrang) album Gee, That Ain't Swell on DryRun Recordings (Jesu, Red Stars Parade) and toured the U.K. and forming a tight alliance with northern grind band Narcosis. The two styles of fast and slow complimenting each other. A split record was rumoured to be in the works but Narcosis split before it ever came to fruition.
Shortly after the first album Nikolai Grune joined on vocals. He had been playing with Dawson and Fowler in a short lived grind project called Onaprienko which had never seen the light of day. The band continued to play and tour until Dawson's commitments to Million Dead meant they had to temporarily put the band on hold.
During this hiatus Fowler joined Million Dead as their guitarist after the departure of Cameron Dean. This actually meant that the prospect of reigniting Palehorse was a brighter one as it became easier to conceive of working both bands at the same time. In 2005 they reconvened for two practices with Fowler in the band. At the second he decided his heart was not in it but the band was already on a roll and decided to keep going.
James Bryant joined in place of Fowler and they started to gig and write and released the EP Habitual Linestepper on Eyesofsound in 2008. They started the recording process almost two years before the actual release but financial and time constraints caused the hefty delay. The EP consisted of an into track which was the last track of Gee, That Ain't Swell "Sunstarvedday (be patient)" played backwards and entitled "Waited" as a nod to the time it had taken for them to release a record. Of the other four tracks only one, "I'm afraid we're all still in wheelchairs" was written with Bryant. The other three were older tracks written with Fowler that the band were regularly performing before their hiatus. One, "What community, what scheme?" was written just before the band went in to record Gee, That Ain't Swell. The band wanted to document the tracks rather than letting them fall into the ether.
After the release of Habitual Linestepper long term vocalist Seedi left the band. He continues to play with Dawson in Armed Response Unit. The band now consists of Ben Dawson-Drums, Nikolai Grune-Vocals, James Bryant-Bass, John Atkins-Bass, Mark Dicker-vocals/electronics (Trencher).
Their long awaited second full length Soft as Butter; Hard as Ice on Eyesofsound is now out at http://www.eyesofsound.com/label/release_profile.php?cat=EOSCD029 and they are writing a new set of tracks.
2.) In 2011, Palehorse is writing songs for a split with Connecticut's Unforgiven and a brand new full length.
Palehorse took its first stride in the summer of 2003. Vincent Calandra, joined forces with long-time friend Dave LePage to give today's hardcore what it's missing; Hardcore. Palehorse released a demo 3 songs of furious wrath, including the heart stopping "May Day". The demo was simply titled 'And I looked' By the time the demo was released, Palehorse had begun working with their contacts all over the Northeast.Palehorse hit the road with a vengeance, playing relentlessly, weekend after weekend, and city after city. Whether it was in Connecticut, Western Massachusetts, Pennsylvania, or Vermont, Palehorse went there. And they went there again, and then they went there again.Also now two us tours have been put under the horses belt.Hitting the rod with such acts as The Hoods. After quickly realizing the potential for Palehorse, the members decided to record an EP. The band needed a studio, and they heard rumors about a studio opened up by Matt Henderson (Madball), and Dean (Salad Days). It was called Atomic Recording. Palehorse went to Atomic and cut a record explosive enough to level entire cities. That bomb is just waiting to be released. Martyr Records was the commander in cheif to use the new wepon.Secrets Within Secrets hit with a fury! Drummer Joe Longbardi was the next addition, bringing the rhythm section of Palehorse to an unprecedented level. He is lightning fast and thunderously powerful, and exhibits a rhythmic imagination unparalleled. All anyone seems to say about him is, "Where did you find that kid?" Well, he just kind of showed up at practice one day and hung out. Palehorse has also added a second guitarist, John Tamas. Tamas has played in various bands with all of the members for more than a decade. He rounded out the sound, added a few blazing metal solos, and added to the live performance with his raw, boundless energy. Palehorse launches a new crusade every time they take the stage.