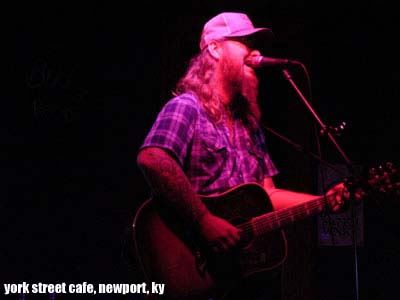 Otis Gibbs is a man in search of an honest experience. Some people refer to him as a folk artist, but that is a simplistic way to describe a man who has planted over 7,000 trees, slept in hobo jungles, walked with nomadic shepherds in the Carpathian Mountains, been strip-searched by dirty cops in Detroit, and has an FBI file. Otis has played everywhere from labor rallies in Wisconsin, to anti-war protests in Texas, Austria and the Czech Republic, Feed & Seed Stores in the Midwestern U.S. and in countless, theaters, festivals, bars and living rooms. Much of his work concentrates on the world that is ignored by pop culture. Sometimes forgotten, obsolete or simply marginalized, it is a world that doesn't fit into a twenty-second sound bite or a White House talking point. Otis has spent the last fifteen years traveling across America and abroad documenting this world, and has a story to share about each stop along the way.
Otis grew up in the rural town of Wanamaker, Indiana. He first stepped on stage at the age of four, when he sang Jimmie Rodgers' "Waiting for a Train" at a neighborhood honky tonk. While his parents worked countless hours trying to make ends meet, Otis was often in his uncle's care. Not accustomed to parenthood, the uncle was sometimes bored, so the two would frequent bars, where Otis sang for tip money (which meant more booze for his uncle). Otis was hooked, and would often ask if they could go back and sing some more songs. The answer, "Only if you promise to never tell your parents."

Otis started working when he was in high school. He stacked concrete blocks, flipped burgers, drove an ice cream truck, pumped gas, and did countless other crummy jobs. After discovering writers like Edward Abbey, Henry Miller and Lawrence Ferlinghetti, he started questioning what he was doing with his life. He was tired of working jobs that didn't stimulate, or interest him in the least. So, in his own words, he decided to just "drop out." Over the next four years, Gibbs earned and lived off less than $3,000 a year and had never been happier. He got rid of his car and shared apartments with artists, musicians and radicals (often living with 5 to 10 people). He also took advantage of the free time and wrote hundreds of songs. Otis sacrificed many of the comforts most of us take for granted, so that he could live a creative life.

The next few years were spent touring and releasing four indie records. The most notable being "49th and Melancholy," (a stripped-down acoustic record, that was recorded to two-track reel-to-reel in a friend's laundry room). There was also "Once I Dreamed of Christmas," a collection of songs he'd written "for people who don't like Christmas."
In 2004, his critically acclaimed, "One Day Our Whispers" was released. It was an unpopular time to speak truth to power, but the album's optimism and anti-war undertones resonated deeply with people who felt uncomfortable with the direction America was heading. Though songs like "I Wanna Change It," "Thirty-three" and "Ours is the Time" have been described as protest songs, Otis prefers to call them "love songs for young radicals." "The Peoples Day" was later included in a Wall Street Journal list compiled by Billy Bragg of the "Top Five Songs with Something to Say." This placed Gibbs in the company of Bob Dylan, The Clash, Sam Cooke, and Chuck Berry.

His latest album, "Grandpa Walked a Picketline," is a glimpse inside of an America that you don't see on the evening news, but it is the America most of us see at our doorsteps. The album showcases Otis' ability to breathe life into the characters of his songs. One such example is "Caroline." The song tells the story of a woman who married too young. She finds herself stuck in an abusive relationship and secretly fears that her children will suffer the same fate. The populist anthem, "Everyday People" shines a light on the struggles our grandparents endured in the workplace. As the line in the song suggests, their generation's willingness to take a stand, "made things better for you and me." "Preacher Steve" is certain to ruffle some feathers, but a closer listen will reveal that the only people who should be offended by the song are those cynical clergymen who prey on fear for profit. This album is a reminder that Otis, above all else, is a damn fine songwriter. "Grandpa Walked a Picketline" was produced and mixed by Chris Stamey, engineered by legendary Motown engineer, Bob Olhsson, and was recorded in Nashville, Tennessee with an impressive list of players including, Al Perkins, Don Dixon, Tim Easton and Will Rigby.
Otis currently resides in Nashville, Tennessee with his long time girlfriend, Amy Lashley, their dog and two cats. Recently, he's been examining ways of using bird feeding as a form of civil disobedience.
"In troubadour Otis Gibbs, we may have found America's contemporary Billly Bragg. Not since late A&M period Phil Ochs have we heard such a distinctly American blending of the personal and the political"
- Edward Burch, HARP MAGAZINE
"Gibbs is a Midwesterner with a long beard, a trucker's hat and and a bag of sharply observed country-rock songs, some far enough to the left side of the political fence to make him a spiritual descendent of Woody Guthrie and brother of Steve Earle. But it's the heart-touching humanity he displays that wins your heart."
-Larry Katz, THE BOSTON HERALD