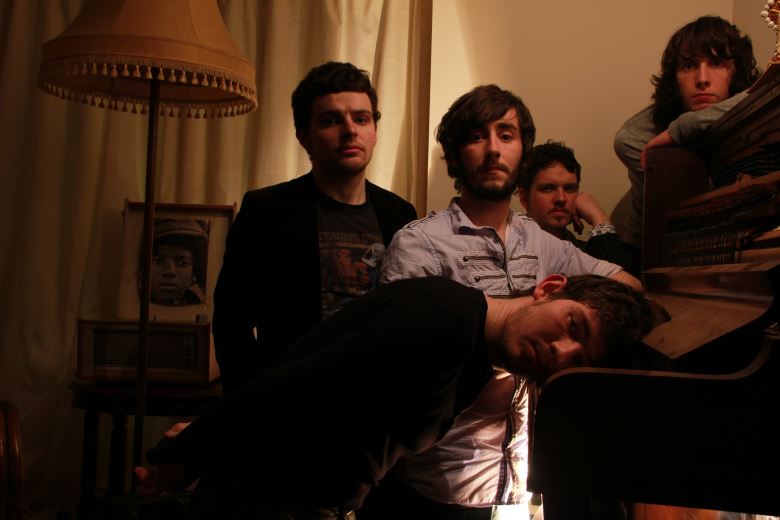 Recorded at Big Skin HQ, the base for the band’s label operations, Vitreous is the new album from O Emperor. The band’s own DIY studio was (literally) built from the ground up with everything from label administration to recording happening inside its grubby, fire-stained walls. The resulting recordings are a direct representation of this operation, being the band’s most ambitious and accomplished work to date; a stamp moulded from their many meandering sessions there.
While debut Hither Thither could be described as a lush tapestry displaying a classical use of depth and shading, Vitreous is more like a stark, multi-coloured and pixelated piece of pop art. Heavily distorted drums take their place alongside syrupy analogue synths and disgusting fuzz guitars sounding like bees buzzing inside tin cans. Beautiful landscapes are destroyed with disparate, abrasive sounds in perverse displays of artistic self-destruction.
All old school friends from Waterford, who grew up playing together in various bands and discovering the records they collectively grew to love, O Emperor emerged with debut long-player Hither Thither in 2010. A record of immense depth and far-reaching confidence, it was received with lavish praise from fans and critics alike, earning the band a Choice Music Nomination (Irish album of the year). Since then, the band have shared the stage with the likes of MGMT, Spoon and Villagers, performed at a range of Festivals including SXSW, Benicassim and the Electric Picnic, had a special arrangement of the song “Sedalia” commissioned for a performance with the RTE Concert Orchestra and received praise from Rolling Stone, NPR World Cafe, Artrocker, BBC 6, Hot Press, The Times and many more.
Vitreous was entirely produced/recorded by the band, affording much time for them to play around with old synthesisers and other strange pieces of equipment lying around, while also regularly playing host to all-night parties/recording sessions with friends. The nine songs on the record represent a fraction of the ideas explored in over fifty demo recordings undertaken in the studio in the year the album was recorded. The fruits of these exploratory sessions are borne out by the succinct articulation of the musical ideas on Vitreous, a refinement that comes only with a healthy measure of experimentation. No qualified sound engineer was present, allowing the band’s whims for making things sound “wrong” to slip through the net. Without the presence of a sensible, discerning individual to pull the reins in on such things, the production on Vitreous boasts an artful curiosity and adventurousness which becomes ever more attractive as the record unfolds.
Clocking in at just over 29 minutes, the record is striking for its sense of economy and directness. More remarkable still is the fact that within this half hour of music, such a broad musical spectrum is taken in. In this way, the listener’s sense of duration is warped, unhinged by the depth and detail of the work. The record proceeds with each song as a self-contained island with its own sonic character; a 29-minute island hopping tour taking in snippets of Kraut minimalism, 70s/80s glam/art rock maximalism, freak balladry, Prog noodling and electronic flights of fancy. Certainly, any element of the organic folk leanings evident on debut Hither Thither, are forsaken in some of the album’s opening lines: “Get me back to my gutbucket bedsit where I can smell the shit in the city air”. And so it continues thus….
Vitreous is a work that finds O Emperor carving out their very own unique aesthetic perspective. The sounds themselves admit a sense of this discovery. Luckily for everyone else, this record is one that is rediscovered again and again with each listen.
"Gentle and delicate songs, guided by intricate urgently-picked guitars, grinding electric lines, expansive piano playing, some electronic tomfoolery, and wonderfully harmonised vocals - there’s a straightforward sincerity to the music of Waterford band O Emperor. Sounding a little like the Beach Boys, The Band, and The Smiths being digested by a cannibalistic Lee Mavers from the La’s, O Emperor haven’t even released an album yet and they’re already better than many decades-old bands I could mention..."
HOT PRESS - JULY 15th 2009
“O Emperor sparkled like the jewels in the crown of the Waterford music scene that they are”
THE IRISH TIMES
“Of all the bands I caught last night here in Dublin at the Hard Working Class Heroes Festival, the real standout was this band from Cork, O Emperor that played early on at Andrews Lane. It was warm and personal and genuine, but still has its best music ahead. Give this one some time and some sunlight and it's going to grow into something large”
FUTURESOUNDS
“O Emperor seem uncannily older than their years. Boasting slick production along with meticulous arrangements, O Emperor have ticked off the right boxes to create a post-rock classic”
TOTALY DUBLIN
“Nothing short of genius”
HOTPRESS
“Beautifully polished songs, many of which should already be stamped ‘classic-in-waiting’; each seems to come complete with great verses, hummable choruses and gorgeous harmonies. Why can’t all bands be this instantly lovable? O Emperor are already different class”
STATE.IE