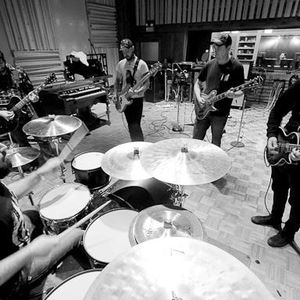 There are several artists named Norma Jean, the by far most popular being a metalcore/mathcore band from Douglasville, Georgia, U.S.A. (1). Norma Jean is also a country singer from Wellston, Oklahoma (2).
(1)
Norma Jean is a metalcore/ mathcore band from Douglasville, Georgia, USA- a suburb of Atlanta. They were originally known as Luti-Kriss. They released two albums: an EP (titled 5ep) in 2000, and a full-length release, Throwing Myself on March 13, 2001. After the release of Throwing Myself, the band changed their name to Norma Jean to avoid confusion with rapper Ludacris.
Their original vocalist, Josh Scogin, left the band right after the release of Bless the Martyr and Kiss the Child and went on to start The Chariot. He was temporarily replaced by Brad Norris, who was then replaced by Cory Brandan, formerly of Eso-Charis, Living Sacrifice, Uses Fire, and The Handshake Murders.
On August 13, 2002, the band released Bless the Martyr and Kiss the Child on Solid State Records which inculded released single 'Face:Face' with the video directed by Darren Doane. They released their second album in March of 2005, titled O God, the Aftermath. almost exactly a year later, they re-released O'God as a Deluxe edition CD\DVD combo with a few hours of recording and tour footage as well as three music videos for Bayonetwork, Liarsenic, and Absentimental.
Norma Jean's third studio album, Redeemer, was released on September 12, 2006, under Solid State records. This was the third studio album since changing their name. shortly after, they released a music video for the song "Blueprints for Future Homes" which was directed by the same Swedish twins that directed "Liarsenic"
In August 2008 Norma Jean released their fourth studio album, entitled the Anti-Mother. Featuring a new drummer, Chris Raines, who replaced former drummer Daniel Davison. Guests on the album include Page Hamilton of Helmet and Chino Moreno of Deftones.
Norma Jean is also the stage name of Norma Jean Wright, lead vocalist of the band Chic from 1977-78. Prior to her work with Chic, she sang with The Topettes and The Spinners. Most notably, she sang lead vocal on the 1978 album Chic, which includes the hits "Dance, Dance, Dance (Yowsah, Yowsah, Yowsah)" (#6 Pop, #6 R&B in January 1978) and "Everybody Dance" (#38 Pop, #12 R&B in April 1978).
Norma Jean left Chic in 1978 to begin a solo career. In July 1978, she scored her first R&B Top 20 hit, "Saturday" (#15), from her debut album Norma Jean on the Bearsville Records label, produced by Bernard Edwards and Nile Rodgers. In January 1980, she scored her second (and last) R&B Top 20 hit, "High Society" (#19), also produced by the Chic team. Other popular songs of Norma Jean Wright, include the following: "Sorcerer" from debut album Norma Jean (1978), "Having a Party" from Norma Jean (1978), "I Like Love" from Norma Jean (1978), "Hold Me Lonely Boy" (1979), "Love Attack" (1983), "Shot in the Dark" (1984) "Every Bit of This Love" (1985).
Norma Jean also sang as a backing vocalist with the following artists: C+C Music Factory, Constina, Randy Crawford, Will Downing, Aretha Franklin, Fantasy, Debbie Gibson, Nelson Rangell, Luther Vandross, Madonna, Sister Sledge and Nick Scotti.
Another Norma Jean, also known as Pretty Miss Norma Jean (b. Norma Jean Beasler January 30, 1938) is an American country music singer. She is best known for her spot on The Porter Wagoner Show from 1961 to 1967 before her replacement by Dolly Parton. Norma Jean, however, was a country singer in her own right, having a handful of country singles that hit the Top 10 and Top 20 between 1963 and 1966, including "Let's Go All the Way" and "The Game of Triangles". She proved instrumental and important in opening doors for other female country singers. Although she didn't have the songwriting prowess of Dolly Parton, her voice was warm, and her records are still easy to listen to.
(2)
Norma Jean is the artist's name of country singer, Norma Jean Basier (born Wellston, Oklahoma, U.S.A., 1938).
Norma Jean is best known as a regular performer on the Ozark Jubilee TV show (1955), the Porter Wagoner TV show (between 1961 and 1967). Her recording career started in 1963, the year in which she also became a member of the Grand Ole Opry. She had many country hits in the years thereafter.
She seemed forgotten by the end of the 1960s but returned in 2005 with the comeback album, The Loneliest Star In Texas.