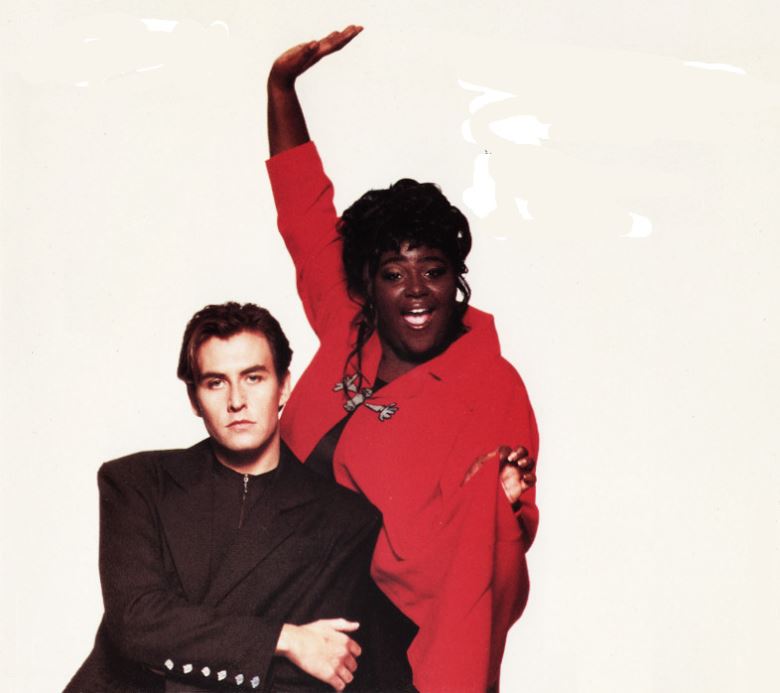 There are multiple artists with this name:
1) Nomad is a house music duo from England, UK. They had several big hits on the Hot Dance Music/Club Play chart, as well as some similar successes in the UK Singles Chart. Group members are Damon Rochefort and Steve McCutcheon.
In 1991 they hit #1 on the dance chart, and #2 in the UK, with the track, "(I Wanna Give You) Devotion." The issue bore the credit 'Nomad featuring MC Mikee Freedom'.
The band had more hits into the 21st century, with "With You" peaking at #2 on the dance chart in 2000.
2) Nomad is a raw punk act from New York City, USA.
They are influenced from ultradistorted Japanese hardcore. Link
Comprised of Perdition and Cervix folks. The band sticks to the essential elements of the noise punk formula and really do nothing to hide their worship of raw crust classics such as Confuse and Disclose and that's part of their very charm. Ultradistorted punk insanity.
3) Nomad is a Polish Death Metal band. They were founded in 1994.
After the core members have come up with the idea of a band a second vocalist, Bleyzabel, joined the band and in the beginning of 1996 the group entered Salman Studio in Bialystok to record its first demo entitled "Disorder" featuring over 30 minutes of brutal death metal. The demo received lots of very positive reviews all over the world. Back then the band played some gigs with the major bands of Polish underground such as VADER, DAMNABLE).
In October 1997 the band once again entered the Selani studio, famous for productions from Vader, Behemoth and Yattering,to record their first full-length material "The Tail of Substance" by self-release.
For the album's promotion, the band were scheduled for a mini-tour with LUX OCCULTA,CHRIST AGONY, HATE and HERESY organised by Novum Vox Mortis and Pagan Records.
In 1998, the group recorded four songs which helped them to sign a record deal with Novum Vox Mortis . This made the band re-enter the studio to record an additional three-songs which was added together to create an album entitled "The Devilish Whirl". The band then promoted their second full length with Lost Soul, Trauma and others in Poland and other eastern bloc countries.
In 2002 at the Hendrix Studio the third full legnth was recorded and entitled "Demonic Verses" in 2004 via Baphomet Records.
Guitarist Patrick (a.k.a. Seth) is also a full time member of Polish Black/Death Metal band Behemoth.
Official Myspace
4) Nomad is a folk/hip hop artist from Belgium.
He is also a member of cavemen speak, gunporn and nuccini! all off the label shadowanimals.
His solo album "Lemon Tea" by Hue which was a big sucess
5) Nomad is a trance one-man-band.
6) Nomad is bar band from central Maryland, USA. The band covers of great rock, pop, blues, country, rhythm and blues, rockabilly, jazz and rock 'n' roll as well as originals. They were formed by friends Tom, Leo, Bill and Rick.
Official Website.
7) Nomad is a rock band from Hungary.
Formed in early 2004 by former Bedlam members Szabolcs 'Cicó' Jánosi and Zoltán 'Fodi' Fodor, the band was completed in November 2004 with the additions of drummer Ábel Mihalik and former Warpigs bassist Bálint Gátos. Their full-length debut Végál.om.. was released in June 2007 and featured a sound comparable to 90's alternative rock and grunge bands, along with some jazz influences. After a few member changes in the rhythm section, the band quietly disappeared in 2010.
Nomad resurfaced in early 2013 with a new lineup (consisting of Cicó on guitars, Bedlam drummer Péter Újvári, Neck Sprain bassist Levente Nagy and vocalist Marci Juhász) and a slightly heavier, more metal sound. A new album is in the works.
8) Nomad is a nickname of Vladimir Goryachev (born May 20 1978), a russian computer- and video game reviewer and moderator of site ag.ru. He is famous because of an internet-meme "Grabit' korovany" ("To rob the corovans") and appears on popular macro-picture "ХУИТА" ("Bullshit") used to characterize bad threads in russian-language imageboards.
9) Nomad is named after Adam Plack, an Australian-born didgeridoo player and recording artist.
10) Nomad is an alternative band from Saint-Petersberg, Russia. They take influnces from Tool and A Perfect Circle.
12) Nomad is a brutal death metal band from USA. They released one demo in 2005.
Band Info
13 Nomad was a deaththrash band from the Netherlands. They released one demo in 1994.
Band Info
14) Nomad was a black metal band from Hungary. The band released one demo in 1997.
Band Info
15) Nomad is a Swedish rapper.
16) Nomad Is a sludge band from Manchester, feeling that their weren't already enough bands called Nomad
Seeking to lay waste in an environment already dissolute, Nomad are a 4 piece Sludge/Doom band bred from Manchester and other likewise holes, incorporating elements from across the spectrum with the vague purpose of sending you on a bad trip or at least maiming you along the way.
With killer Grooves and Sabbath worshiping riffs, we are ready to bust out some slow/fast loud music in venues all over. We wish to bring our brand of sludge to unsuspecting and unfortunate concert goers everywhere.
Band info