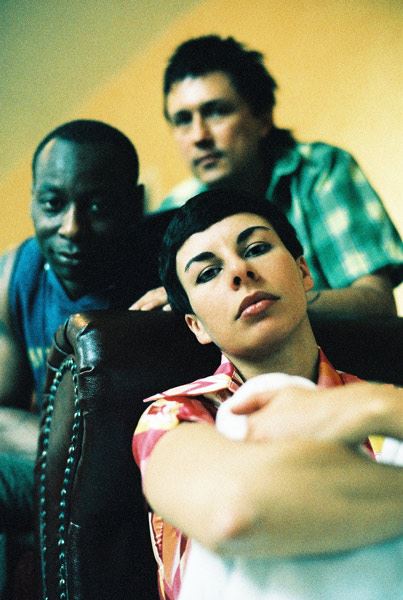 N.O.H.A. is a band founded in 1995, by leader Philip Noha (b. Prague, Czech Republic) and Chevalier Hadley (b. NYC, NY, USA - aka Chevy).
N.O.H.A. stands for 'Noise of Human Art' - Noha and Chevy have been the key figures of the project through its entire existence. The band is characteristic by its open genre-mixture of drum&bass, world music and energy loaded grooves. Hits like Balkan Hot Step, Pijama, Dive in your life, Base From Above and primarily Tu Café brought the band to the biggest European festival stages, for example: Eurospotting-Kopenhagen, Bourges Festival, Roxy-Istanbul, Electronic Beats Festival (supporting Prodigy), Roots Festival-Amsterdam, Espantapitas Festival, Rock For People, Exit, Pohoda, Colours of Ostrava, PopKomm, Rolling Stone Roadshow, Bizarre Festival, Nancy-Jazz Festival, Funkhaus Europa-Festival etc. When on stage, N.O.H.A. stands out as a living, breathing tornado and it emits highly infectious positive energy surfing from the atmosphere to the stage, which has been proven by countless reactions to shows in numerous festivals this year alone, in the Old continent. With its evident fondness for traditional music and multicultural approach N.O.H.A. crushes the boarders between different music genres and continents and thus connects naturally dynamical loaded groove with lively, joyful and playful performance. This is now even augmented by the presence of Brazil singer and guitar player Camila De Oliveira, whose enchanting voice and very distinctive latin-punk feeling adds new dimension to both the music and live shows of N.O.H.A..
Camila studied singing, film music and music production at Tom Jobim Academy in São Paulo. She lived alternately in Sweden, Denmark, Brazil, India and Israel. This background might be the reason, why can she offer her voice in so many different levels and so maturely in the age of just 27 and why the strong impact her presence has on recent song writing and lyric writing process within the project. At the end of last summer Camila reached Prague after long travel and probably has been so surprised by local winter that she literally freezed until early spring, when she met Philip Noha. After couple of common jam-sessions it was more than clear that their mutual collaboration is perfect, although they come from different cultures and backgrounds. Therefore, Philip offered Camila to become a member of N.O.H.A.. Camila agreed and very successful summer tour followed, when the band day after day and show after show surprised its audience with never-ending load of emotions, joy from the show itself, with energetic on-stage appearance and very lively performance. In a very short time Camila became a new voice of N.O.H.A.
N.O.H.A. Noise Of Human Art, Circus Underground is:
- MC Chevy (New York, USA), project´s co-founder, band's “soul”, lyricist, integral part of N.O.H.A. imparting its charisma, voice, living power and energy to the project
- Camila de Oliveira (São Paulo, BRA), singer, guitar player, song-writer and lyricist, band´s “voice”, new face of the project, globetrotter filled with inspiration of culture from all over the world. Through N.O.H.A. she passes this inspiration on her audience both on stage and in the studio
- Philip Noha (Prague, CZ), founder of the project, band´s “head”, composer, producer and saxophone player setting its direction throughout entire existence of N.O.H.A. It was his composition and production of songs like “Balkan Hot Step” or “Tu Café” which moved N.O.H.A. to its current level
- Thom Herian (Prague, CZ), sensational Czech drummer and band's beating “heart”. Only few drum-kit players in the world play live drum and bass like Thom does. His performance is a special experience not limited to musical enjoyment
- Jatrabass (CZ), band´s „liver“, bass guitar and double bass. Like its equivalent in human body, Jatrabass also filters just the elements needed for band´s musical blood and its bloodstream. Precision and excellent coordination with the drum-kit make for band´s extraordinary groove station.
To its live shows N.O.H.A. regularly invites different guests, for example beat-boxer Skiller (BG) or vocalists Charlie One (UK) or Susi Gamboa (CZ). During its relatively long existence (founded in 1995) project proved itself as a very stable musical entity which overcame two changes on the singer post (Sam Leigh Bown from UK and Minerva Diaz Peréz from Germany) and managed to refresh its potential with new singer Camila de Oliveira (BRA), drum-kit player Thom Herian and bassist Jatrabass. In turn, these three pushed the band at
least a level higher. As the numerous reviews in both printed and electronic media may prove, the band is currently in its best configuration since it was founded and reactions of its fans are in the similar tone. You will have the opportunity to hear first new tracks of creative set Philip Noha, Camila De Oliveira, MC Chevy and Thom Herian on band's fall tour.
Sites: SoundCloud, ReverbNation, Facebook (group), BandZone.Cz and N-O-H-A.com (official).