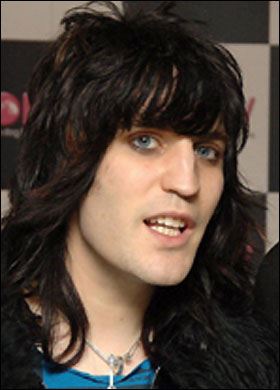 Noel Fielding (born 21 May 1973 in London, England) is an English artist, comedian and actor. He is known for his role as Vince Noir in The Mighty Boosh, which he also co-writes with fellow actor Julian Barratt. He is the co-originator of crimping.
Noel Fielding performed regularly as a stand-up comedian during the late 1990s, and appeared repeatedly on the BBC television stand-up showcase Gas. His highly animated stand-up routine included surreal stories, characters, and songs, much like his later work in The Mighty Boosh. Noel also stars in The IT Crowd as Richmond, but due to a busy schedule, he did not appear in series 3. He has also appeared in Never Mind the Buzzcocks as a guest captain in place of Bill Bailey. He also co-presented Top of the Pops on Red Nose Day 2009.
Fielding is best known for playing the role of Vince Noir opposite Julian Barratt (Howard Moon) in the cult comedy series The Mighty Boosh. Fielding met Barratt when he was performing a gig - Barratt offered Fielding a place to perform. Barratt was impressed by Fielding's skill, and the two formed a partnership. They often compare their relationship to a marriage.
His character is a kind, somewhat naive and loyal friend to Howard Moon. He can talk to animals, earning him the nickname "Mowgli in Flares". Vince has a Polo Mint theme that occurs in many episodes (e.g. The Hitcher's eye, the background of the main titles, the Ape of Death's costume).
Vince has a very feminine aspect to his attire, often being confused as Howard Moon's "wife" by supporting characters. This is due to his androgynous dress sense, which commonly includes lots of different coloured/print drainpipe jeans, boots with heels, a mirror-ball suit, faux-fur leopard skin jackets, capes, sparkly accessories and clothes from high-street store Topshop.[citation needed]
Noel plays various other characters in the television show including Tony Harrison, a small pink head with tentacles and member of the shamen council. The Hitcher, a cockney hitch-hiker who enjoys "cutting people up". He also plays Spider, a bongoist in Rudi's band. Noel also plays Old Gregg, an underwater seaweed monster with an obsession with baileys and water-colours and an infatuation with Howard.
Outside of his work on The Mighty Boosh, Fielding has also had bit parts in many of Channel 4's somewhat off-beat comedy programmes, including Nathan Barley, The IT Crowd, AD/BC: A Rock Opera and Garth Marenghi's Darkplace, more often than not appearing alongside Julian Barratt. He also appeared in 1998 sketch show Unnatural Acts.
Fielding has appeared in several music videos, including Mint Royale's 'Blue Song', alongside Julian Barratt, Nick Frost and Michael Smiley. He also made a brief appearance in the video for Razorlight's 'In the Morning'. Additionally, he appeared in two music videos for the Robots In Disguise songs 'Girl' (alongside Chris Corner who was, at the time, boyfriend to Sue Denim) and 'The Tears'. Recently, Noel has been involved in the Kasabian video "Vlad The Impaler", in which he plays the character of Vlad. The single will be released as a free download mp3 on Tuesday the 31st of March 2009 and is available for four days on the bands website. Fielding is friends with the members of Razorlight, and involved them in the 'The Priest and the Beast' episode of The Mighty Boosh. Fielding lent his voice to the Midfield General song 'Midfielding'. Fielding also sometimes plays bass live for Robots In Disguise. Furthermore, he has been known to DJ, often playing at The Barfly in London with the rest of The Mighty Boosh or with his DJ collective known as Team Disgusting, made up of six girls and the Rev (formerly of Towers of London).