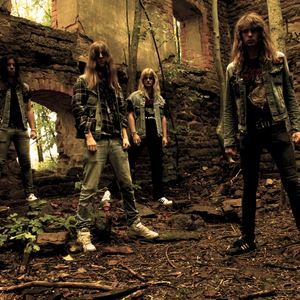 There are at least 8 artists which use the name "Night"
1) Night is a rock band dating from the late 1970's and early 1980's. Night's vocalists Stevie Vann (aka Stevie Lange) and Chris Thompson had met when Vann had provided backing vocals for the 1978 album Watch by Manfred Mann's Earth Band then fronted by Thompson. Soon afterwards Thompson invited Vann to join him in a new outfit, Vann's session group known as Bones having recently disbanded and Thompson having reduced his involvement with Manfred Mann's Earth Band.
Richard Perry produced two albums by Night for his Planet label; the group's eponymous 1979 debut album "Night" yielded two US Top 40 hits: "Hot Summer Nights" (#18) and "If You Remember Me" (#17).
"Hot Summer Nights", a cover of a minor Walter Egan hit, featured Lange on lead vocals and gave Night their one international hit most significantly in Australia at #3 with more moderate success in Canada (#23), the Netherlands (#21) and New Zealand (#28).
"If You Remember Me", recorded as the theme song for the film The Champ, was introduced the Night album but in its single release credited solely to Chris Thompson with another album track "Cold Wind Across My Heart" - featuring both Thompson and Vann - being marketed as the second Night single; the latter track failed to chart and the Night album peaked at a moderate #113, the group's gig opening for the Doobie Brothers failing to significantly boost their popularity.
A second album release by Night in 1980 entitled "Long Distance" produced a minor hit in its single release: a cover of Gallagher and Lyle's "Love on the Airwaves", and was otherwise overlooked. Night had no further recordings released but did not officially disband until 1982.
Night can be seen in the 1980 film The Monster Club performing "The Stripper".
2) Night is progressive electro punk rock band which was formed in 2008 by musicians who were touring the old continent and the planet with different bands since the nineties. The band was established by the producer and lead singer Amak, who had a concept, lyrics and fragments of music and who also knew the guitarist Patrik and bassplayer Daniel thanks to further cooperation and above all they all come from a small town Tabor, which is known even outside the country for its surprisingly rich music production. Finally, the drumer became Regal, their friend and colleague from the backline service company Nomads of Prague. In 2009 Amak moved to Camden, London, where the band played also it's first gig. The fact that all the band-members are living in different places in Czech Republic and Europe doesn..t really influence its existence. The Night is working in kind of blocks, they use to spend intense time together, after move on separately to continue with their other projects, bands, studio work, producing and other issues. To sum up the members personal history for those who are interested, here is a reduced overview:
Amak: Blank: vocal, Sunshine: bass, synth programing
Patrik: Blank: guitar, Waawe: guitar, sampler, C: guitar
Daniel: Please the trees: keyboards, Veena: drums
Regal: Priessnitz: drums
http://www.myspace.com/nightbegun
3) Night: Electronic Musician from the United States.
http://www.night-music.com
4) NIGHT is hard rock group from Panevėžys (Lithuania), which was born in 1990. It has been searching for own and true musical way all the time. This group had contested and won in many musical competitions. „Tokie laikai“ is album witch „Night“ released in 1994. Group stopped working in 1998 without particular reason, but luckily it raised hard rock flag again in 2003. This group combines musical practise with youthful energy and keeps faithful to proper and true rock. Musical nation of rock has wrongly changed in Lithuania so not many true rock groups has left. Fortunately, NIGHT is one of the groups, which properly understands and interprets spirit and finer points of rock music.
http://www.myspace.com/nightlt
5) Night is a one man Black Metal band from Sept-Îles, Québec. It was formed in 2006.
6) Night is an atmospheric/ Post-metal band from York, Pennsylvania, formed as a solo project in 2007 and has grown into a three-piece since then. The band consists of Bobby Yagodich: guitar, programming, piano/synth, Matt Jackson: bass, and Zach Nace: guitar & synth.
http://soundsofnight.bandcamp.com/
7) NIGHT is a folk band based out of Nepal that blends traditional genres of Nepali and Western music. Night's composition is the result of influences by music from all over the world and musical and cultural exploration of sounds across different regions of Nepal. Their first full length album titled “Ani Ukali Sangai Orali" is slated for release in September.
Band members:Jason, Bibhusan, Prashant, Niraj, Ranav, Birat, Kushal, Prem, Jiwan, Sumnima
https://www.facebook.com/untothenight
8) Night is a swedish classic heavy metal band that heads out from the town of Linköping. With shows all over sweden, including playing at the legendary festival MUSCLEROCK, and other big festivals like Bråvalla and Skogsröjet, NIGHT can proudly entitle themselves as one of Östergötlands, and Swedens, most up and coming bands!
https://www.facebook.com/heavymetalinthenight/info
http://gaphals.bandcamp.com/album/night-gunpowder-treason-7