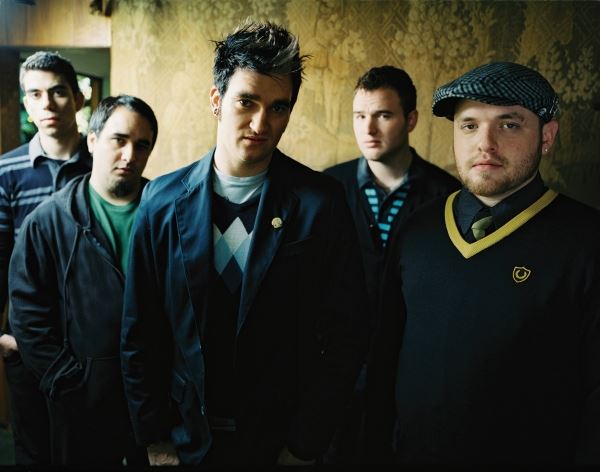 New Found Glory (often abbreviated to NFG) are an American pop-punk band based in South Florida (Coral Springs). The band consists of Jordan Pundik (vocals), Chad Gilbert (guitar), Ian Grushka (bass) and Cyrus Bolooki (drums).
Also known as International Superheroes Of Hardcore, to date the band have released eight and a half studio albums, their latest, Resurrection, was released on October 7th, 2014.
The band formed under the name A New Found Glory in mid-1997 in Coral Springs, Florida, United States and currently based in California. New Found Glory formed in the middle of 1997, with Jordan Pundik on vocals, Chad Gilbert (formerly of hardcore band Shai Hulud) and Steve Klein on guitars, Ian Grushka on bass and Joe Moreno on drums (he was replaced by Cyrus Bolooki after their debut release). Chad Gilbert told MTV News "For us, punk rock and even hardcore music was something we did because we didn't fit in in high school. We had nowhere to go, so we went to shows."
The band recorded their first EP called It's All About The Girls under Fiddler Records in June 1997. The band's enthuasistic and somewhat homo erotic live performances soon resulted in them selling out the entire pressing of this EP. Over time, the strength of the live show helped build a strong following. Their first album Nothing Gold Can Stay was released by Eulogy Recordings. Stefanie Reines of Drive-Thru Records heard the album from the band Midtown and later re-released the album in 1999. They soon recorded an EP entitled From the Screen to Your Stereo, consisting of movie themes covered in a similar manner to Me First and the Gimme Gimmes. As a result of their growing popularity and a distribution deal Drive-Thru had with MCA, which allowed MCA to take away any of Drive-Thru's bands, the band was signed to MCA.
Professional career
Their first release recorded with MCA was their self-titled album, which was released late in 2000 and which was the first to make an impression on the charts reaching number 107 on the Billboard 200 album charts and number one on the Heatseeker chart (the album's hit single "Hit or Miss" reached number 15 on the US modern rock chart). From the Screen to the Stereo would make the top 40 of the Heatseeker charts in 2002.
The band's profile would grow in 2001 with a support slot to a blink-182 tour and a slot on the Warped Tour. The band recorded the Sticks and Stones album in late 2001 for release in the middle of 2002. Sticks and Stones would prove to be their breakthrough record debuting at number 4 on the Billboard album charts selling 91,000 albums in the first week of sales and also reaching the top ten of the UK album charts. The album would spawn two singles namely
* "My Friends Over You" reached number 85 on the Billboard Hot 100 in 2002, number 11 in Canada, number 5 on the US modern rock chart and number 2 on a MP3.com download chart.
* "Head on Collision" went top 30 on both the Canadian singles charts and the US modern rock chart.
New Found Glory headlined the 2002 Warped Tour, and headlined again in 2004.
New Found Glory released Catalyst in May 2004 and it debuted at number 3 of the Billboard album chart in late May selling 146,000 albums in its first week of release. The album would also debut in the top 40 of the UK and Australian album charts. The first single "All Downhill from Here" would go top 20 on both US and a composite world modern rock chart (based on the US, UK, Canada, Sweden, Finland and Australian charts) as at the end of May 2004.
Contrary to the band's announcement on Fuse's Daily Download on March 28, 2005, James Dewees of The Get Up Kids and Reggie and the Full Effect (who had previously provided keyboards for the song "Failure's Not Flattering" on Catalyst and toured with the band as a sixth member for about ten months) did not permanently join New Found Glory, due to his busy schedule with his own band.
Chad Gilbert would also form a hardcore band called Hazen Street with Freddie Cricien and Hoya of Madball, Toby Morse of H2O, David Kennedy formerly of Box Car Racer, and Mackie Jayson formerly of Cro-Mags. However, due to an exclusivity clause in New Found Glory's contract with Universal Music, Gilbert will not be allowed to be a part of Hazen Street, despite co-writing the majority of their debut album's material.
A fifth album called "Coming Home" was released in the September 19, 2006.
From the Screen to Your Stereo Part II is the second cover album by New Found Glory, and is a follow up from the 2000 EP From the Screen to Your Stereo. All the tracks are covers of songs from movies. The album was released September 18th 2007. The US version of the CD (and therefore minus 'Hungry Eyes') leaked online on September 6th 2007.
New Found Glory's seventh album of original material, Radiosurgery, will be released on October 4, 2011. The Radiosurgery Songfacts explains that the title is a metaphor, referencing the way radiosurgery allows non-invasive treatment of tumors as an analogy for dealing with those tough situations in life that need healing.
The band released their first live album "Kill It Live" on October 8, 2013.
In December 2013, it was announced by the bands Facebook page that founding member Steve Klein (guitar) had been kicked out due to personal reasons. No decision has been made on a new guitarist yet.
They released their 8th album Resurrection on October 7, 2014.
Official site: www.newfoundglory.com