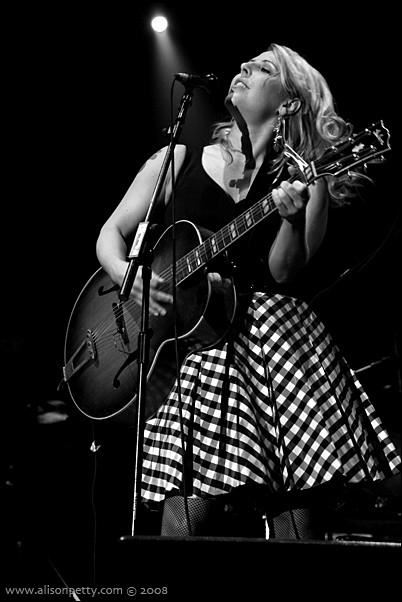 Nell Bryden sings from the heart and shoots from the hip. The blonde bombshell from Brooklyn has the urban lifestyle in her blood, the country/folk spirit of Americana in her soul, and the great American songbook in her head.
Love and loss are the fuel that lights her songwriting fire. Rhythm and melody come as naturally to her as a morning latte in a Greenwich Village café. And a well-travelled journey through life provides a rich seam of experience to mine.
She’s a native New Yorker with a fondness for old-time music and vintage clothes, who’s seen the world and absorbed its musical influences: country and jazz, blues and soul, and more besides. You can hear as much of it – or as little – as you care to find in her music. Because, for all its familiar scents and flavours, her songs are distinctly her own.
Nell Bryden was born and raised in a bohemian quarter of Brooklyn where her mother Jane was a classical soprano who sang at Carnegie Hall and her father Lewis a renowned landscape painter whose works hang in some of America’s finest museums, galleries and private collections.
At only four weeks of age, her mother brought her on a concert tour of South America, planting the seed that has so beautifully blossomed on ‘What Does It Take’. “I always knew I would end up on stage,” says the ebullient singer. “As a child I used to put on plays with my friends – back when I was seven I wrote and directed a version of The Little Shop Of Horrors.”
For ten years she studied the cello and dreamed of becoming an opera singer until the day she first heard Jimi Hendrix and Janis Joplin. “And that was that. I was 15 and that was the first time I realised it’s more about your personality than your technical prowess. People fell in love with Janis because she gave it everything.”
By the time she left high school, Nell still wanted to be the new Maria Callas, but that changed on a gap year trip to Australia, where she turned her travel diary into song lyrics, bought a cheap guitar, and began to sing her own songs for the first time.
Further travels broadened an already inquisitive mind: to Arizona, where she made daily free-fall jumps and lived on a drop zone; to Thailand to work in a refugee camp; to university in Boston, where she graduated in English Literature with honours and began to play in public for the first time.
Back in New York City, she poured out songs in the aftermath of 9/11, delving into old American country music for solace, and recorded an album in Nashville. “But,” she admits, “I still hadn’t found my voice.”
She started another album in New Orleans, where the Big Easy’s musical melting pot – “jazz, blues, folk, country, cajun, zydeco… everything except rock!” - inspired her to find her true voice for the first time.
Then came Ireland, which took her to its music-loving bosom when she booked herself a month-long tour through the internet, and arrived in a foreign land with “just my suitcase and my acoustic guitar.” She travelled from gig to gig by bus, and stayed on couches “that every passing musician had slept in for the last ten years.” But it worked: “I played 30 venues and all of them booked me to come back.” So she did – time and again.
Lastly came Iraq, following a chance meeting with a US Army colonel at South By South West, where she set aside her political preconceptions to entertain the troops – not once, but twice – and became, in the process, a Forces Sweetheart.
Her greatest stroke of good fortune, however, came in her own backyard. “I was back at my dad’s studio, out of cash, going through some of his old paintings, when I found an unfamiliar one at the back of a box in his attic.”
It turned out to be a gift that her father had got her as a baby, and forgotten all about. In the intervening years its painter, Milton Avery, had posthumously become a major artist. “So I took it to Sotheby’s and it was sold at auction for $270,000.”
Nell used the cash to re-record the album she had left uncompleted in New Orleans, this time with Grammy-winning record producer David Kershenbaum at the helm. The result is ‘What Does It Take’, a collection of songs and styles spanning her many years on the road.
It displays a confidence that can only come from years of constant touring, and a sound that taps into the musical past while remaining very much of its time.
“I don’t see myself as a heritage act,” stresses Nell, “but most of my influences are songs that come from an earlier era. I just feel they crafted songs so well then.”