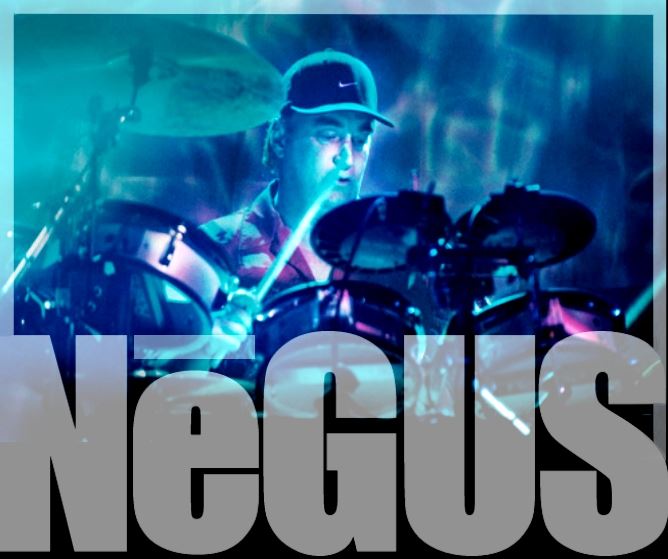 You could write a book on the accomplishments of Steve Negus and fellow Saga band members, in fact, several people are doing just that!! So, here is a very compressed version of what the Lord of the Drums, as he is affectionately known to his fans, has done.
His interest started around the age of 10, as he listened to the top 40 songs on a Hamilton radio station (CKOC), carved a set of sticks from quarter round floor trim and banged away on a set of stools to the sound of surf music in his living room. Then came the early sixties, and Steve put his first band together. He was 12. That was the beginning of the Beatles era, and everyone was caught up in the revolution!

When he graduated from high school, Steve moved to Toronto to work for the Bank of Montreal as a management trainee, but what was really on his mind was to play in a band in the big city. Steve put on a suit five days a week, did his banking duties, and then went to an old draught hall in Cabbagetown (the Winchester Hotel) six nights a week, to play in a three piece country band.

Two years later, Steve was bored with the mundane duties of banking, and quit the bank to play music full time. At the local music store, (Long and McQuade’s) there was a bulletin board where musicians would advertise for players needed. Steve took down the three most appealing ads and called them up. He hooked up with a new band just forming, a 50’s rock and roll band called Bananas. This band was to be his first real pro band that became one the top show bands in Toronto in the early seventies.
One of his band mates played Steve some songs from an R&B band called Tower of Power. The drummer, Dave Garibaldi was incredible! Steve had to play that music. He quit Bananas and formed his own band called Shelter and booked himself into a club at a resort (Wasaga Beach) for the summer of 75.
After less than a year, Negus left his own band to join Fullerton Dam, with Grant Fullerton, an established singer/writer/guitarist of Canadian rock band Lighthouse fame. The material was all original hard-edged rock, and the band released an album on the Condor label, Fullerton Dam Breaks. The album was an adventurous effort, but failed to reach any real level of success, but the recording experience for Steve was invaluable.
While playing a well known club in Toronto, (Larry's Hideaway), Steve's hard driving rhythms came to the attention of one of Canada's premier rock bands, Fludd. The band was on the hunt for a new drummer and offered Steve the gig that night. It was an offer he couldn't refuse, and several weeks later Fludd had a new drummer.
This was the first time that Steve met bassist, Jim Crichton and keyboardist Peter Rochon, who would later join Steve as founding members of Pockets, the original working name of Saga. Brian and Ed Pilling were the driving force behind Fludd, and about a year after Steve joined, Brian was stricken with leukemia and the band couldn't continue to perform.
Pockets was formed out of the rhythm section, and Negus, Crichton, and Rochon went into eight months of intense rehearsal to piece together the new band with Jim Crichton's younger brother Ian Crichton on guitar, and Mike Sadler as the singer. A name change to Saga about a year later, and the stage was set for one of Canada's most adventurous progressive rock bands!

Steve’s success with Saga over the next twenty six years is well documented, with many gold and platinum selling CDs in Europe, Canada and the U.S.! The rhythms in the songs are easily identifiable as some of Steve's best work. In 1981, the band went to England to work with Rupert Hine as producer, and “Worlds Apart” was recorded at Farmyard Studios.
This album went on to hit top 30 in the U.S. and number 2 on the German charts, but couldn't move the Chris de Burgh album, The Getaway, which held the number one spot. Interestingly enough, Rupert, who loved Steve's playing, had Negus fly back to England to play drums on that CD as well! “Don't Pay the Ferryman” was the hit single from that CD.
For a couple of years in the late 80's, Negus and keyboardist Jim Gilmour left Saga and put together GNP (Gilmour Negus Project) with singer Robert Bevan for Virgin Records. The CD Safety Zone - produced by Steve - came out in 1989. Before a follow-up CD could be written and recorded, the boys reunited with Saga and the GNP project was shelved.
Saga continues to tour and record today. In 2003 Steve decided it was time for a change and left the band - which brings us to Steve's new masterpiece...
Dare to Dream!