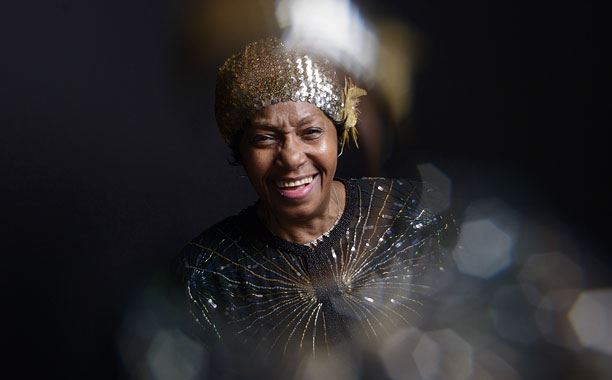 Naomi Shelton is no ordinary gospel singer. Though she, like many others, grew up singing with her sisters in their Alabama church, she has also spent much of her life in the soul clubs around New York, and her 45s, “41st St. Breakdown” and “Wind Your Clock” b/w “Talking ‘Bout a Good Thing,” have long been revered and prized by funk DJs around the globe. Now, with her first official full-length release coming this May, it’s clear that her singing is equally influenced by both facets of her life. This is soul music – informed by the church, perhaps, but soul music nonetheless, relatable to all. Which means that What Have You Done, My Brother?, an uplifting record that conveys Naomi’s energy, her excitement, her love of music, her compassion, is no ordinary album.
This humility, this generosity of spirit, is also on display at her live shows. From her weekly Friday-night gigs at New York’s Fat Cat, where former James-Brown bassist Fred Thomas helps to fill out the Driver-led ensemble, to special performances at Daptone Revue’s, great care is taken to make sure everyone in the audience feels connected to the music, and in turn, to Naomi herself.
What Have You Done, My Brother? is an extraordinary album by a woman who sings directly from her soul, whose experience cannot be duplicated, whose authenticity cannot be disputed. It’s an album whose positivity, no matter your beliefs, is immediately felt. An album that exudes a happiness, and a hopefulness, that is necessary now more than ever.
Cliff Driver is the musical director of the group, and leads the band with his inimitable honky-tonk piano style. Jimmy Hill, the organist on the record, leads his own blues and R&B band and has a pedigree rivaling Driver himself, including a stint in the late sixties backing Wilson Pickett. The record also features guitarist Tommy “TNT” Brenneck and Bosco Mann, both of Sharon Jones & the Dap-Kings and each a producer in their own right. Brenneck is also part of The Budos Band, The Menahan Street Band, and heads his own imprint, Dunham Records. His country approach to rhythm-and-blues guitar handily won him a place at the table with Driver, who often features Tommy’s twangy guitar figures in his arrangements. The drums on the record were played by Brian Floody, a fixture on the bluesier end of the New York jazz scene who beats an indispensable if understated pulse