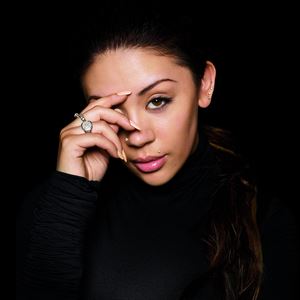 Mutya Buena (born 21 May 1985) is a British recording artist who rose to fame in the early 2000s as a member of girl group, Sugababes until her departure in December 2005. She released a solo album, Real Girl in 2007, which contained a number of hit singles. In October 2010 she announced that she would not be pursuing her career in music any further and would be concentrating on becoming a child psychologist. Buena returned to music in 2011 after taking time to raise her daughter. Her comeback single, "Give Me Love", was released in May 2011. In July 2012, it was officially confirmed that the original line-up had reformed under the name Mutya Keisha Siobhan.
The first glimpse of new material came to light on 7 January 2013 when the group uploaded an short a cappella clip of their debut single "Boys" on Keisha Buchanan's YouTube account.
The original line-up of the group featured a group of friends Keisha Buchanan, Siobhán Donaghy and Buena. Buena and Buchanan were friends from school and met Donaghy at a music recording studio in 1998. Since gaining a record deal, the band have gone on to become one of the most successful U.K. girl groups in the history of British music, second only to the Spice Girls in terms of record sales. They have had four platinum selling albums, six number one singles and a BRIT-Award as well as a platinum-selling greatest hits album.
Following an apparent illness that prevented Buena from promoting the follow-up single Ugly, it was announced on 21 December 2005 that Buena had left Sugababes. According to an announcement on their site, "Buena's decision was based purely on personal reasons and she will continue to remain the best of friends with both". It was found that Buchanan wanted to stay friends with Buena but found it hard as she never sees her. The last remaining original member, Buchanan, said upon Buena's departure, "...we will all miss Mutya, but we also knew there was still a place for bringing in somebody new who could help us carry on taking the Sugababes brand of music forward".." Amelle Berrabah joined the group just 48 hours after Buena's departure. Berrabah was chosen by the group's management and "instantly knew she was the only person to share the rest of the journey with us."
Since her departure from the Sugababes, Buena has worked with a range of record producers, singers and musicians, including Amy Winehouse, George Michael and dance music writers Groove Armada.
Buena began working on her debut album in early 2006, after signing with her previous label Universal Island Records. The first single to be released in the U.K. featuring Buena was that of a ballad duet with George Michael, entitled This Is Not Real Love. Released in November 2006, it was a U.K. Top 20 hit after reaching number 15. It also appeared on Michael's Greatest Hits album Twenty Five. Following this, Buena toured with Michael on the London and Manchester leg of his 2006 25 Live tour. The duet between Michael and Buena is also included on Buena's debut album Real Girl. Preceding the album, the title track Real Girl was released in early 2007. It was a big hit in the UK, making it to Number 2 in the charts, as well as having a BRIT Award nomination for "Best Single". The song samples Lenny Kravitz's hit It Ain't Over 'Til It's Over, and was produced by London-based production company Full Phat. Real Girl was also featured on the Sex and the City, Vol 2: More Music Soundtrack. Following this, Buena's debut album Real Girl was released, and made Number 10 in the UK amid mixed reviews from critics and fans alike. The album only held a place in the U.K. Top 40 Albums for three weeks, quickly dropping off the chart.
Buena performed at V Festival on 18 and 19 August 2007 at Hylands Park, Chelmsford and Western Park, Staffordshire. She also appeared at T4 On The Beach 2007 on Sunday 22 July 2007. Buena also covered Tracy Chapman's classic "Fast Car" in 2007 for BBC Radio 1 as part of the "Radio 1 Established 1967" 40-year anniversary.
The third song to be released from the album was "Song 4 Mutya (Out of Control)" , her collaboration with dance duo Groove Armada. The song received rave reviews from Popjustice reached position 8 in the U.K. charts. The fourth release from the album was "Just a Little Bit" which reached number 65. Buena then collaborated with Amy Winehouse, on a re-working of the track "Be My Baby" by The Ronettes, entitled "B Boy Baby" which reached number 73 in the UK top 75. Mutya's debut solo album Real Girl, was certified to Gold.
On 1 October 2007, Buena was nominated for the 2007 British "Music of Black Origin" (MOBO) awards at the O2 Arena in London. On 14 December 2007, she stood in at the last minute for the ill Jill Scott on the BBC Two program Later... with Jools Holland, fronting Scott's band singing Real Girl and Just A Little Bit.
On 12 February 2008, Mutya was dropped by her record label due to poor sales and charting positions from Real Girl and her last two singles, Just a Little Bit and B Boy Baby.