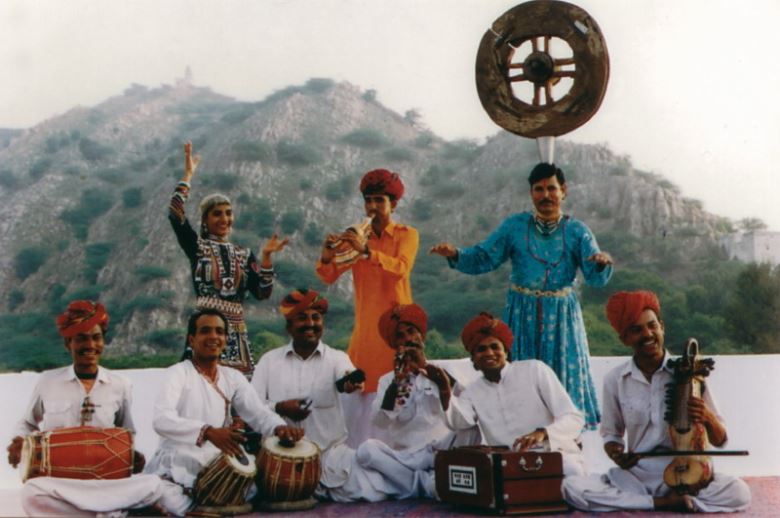 There are, at least, two bands known as Musafir: 1) A traditional indian musical group. 2) A hindi rock band.
1) An Indian group of artists, who perform Rajasthani folk & dance, with a touch of classical.
The word “musafir" itself literally means wandering which reflects the reality of Hameed Khan “Kawa”, the founder, and his artists. They express their itinerant life through their music and the stage performances. As a nomad told to his son: “For us, to stay at the same place is to stop the rhythm of the universe and die”.
Hameed Khan “Kawa”, a tabla player inherited from a musical lineage, draws his own inspiration from his experiences in India and abroad, he has performed with musicians from various musical backgrounds, such as The Trio Erik Marchand, a subtle fusion of French Brittany, Arabian and Rajasthani traditions, Narendra Bataju, Vishwa Mohan Bhatt, Lakshmi Shankar, Chico Bouchiki (Gypsy King), Najat Aatabou, Natacha Atlas, Henri Texier, Lo'Jo, Thierry Robin, Henri Agnel, with dancers like Carolyn Carlson, Gulabi Sapera…and has created Jaipur Kawa Brass Band and musafir, groups of traditional musicians from Rajasthan, with whom he has developed an innovative interpretation of music from the Thar Desert, by adding a new richness and warmth.
Musafir is a cohesive nature of divergent styles and backgrounds from all corners of the Rajasthan: the “Langas” and “Manghanyar”, renowned wandering poets singing a wide repertoire of ancient songs from Thar Desert and playing the sarangi (Indian violin), kartals (castanets), the murchang (Jew's harp)… the musicians of the Court of Maharajas singing, playing the harmonium, the dholak (two headed drum)…, classical musicians interpreting elaborate and sacred songs and performing on tablas…
Hameed Khan “Kawa” has gathered them all together for a complete expression of Gypsy, Hindu, Persian and Moghol cultures, an ethnic and spiritual music with intricate rhythms, sometimes very close to the qawwali music of the late Nusrat Fateh Ali from Pakistan, which lies on the other side of the Thar boundary; musafir has even dedicated a composition to him: Ali Mullah.
The band takes the healing and self development tag , not only in a grooved focus in spirituality, but in a strong visual sense too, like a fakir and fire-eater swallowing a sabre, or dancing on nails with a wodden wheel at the top of his head… a « Sapera » and « Kalbelya » dancer, known as the snake charmers, belonging to the most ancient Gypsy tradition, living with snakes, the guardian of spiritual truth, performing devotional dances, whose contorsions evoke the undulations of the cobra at the sound of the double flute (satara).musafir proposes a musical caravan throughout the Thar Desert at its highest expression and its unique charm… musafir's seven artists carry the legacy over the last ten years by performing at major concert venues and International events around the world…and continues their journey.
2) An Indian-Pop-RocK Band from New Delhi, India.
Known for the explosive Live acts and amazing OCs they are playing live since 2 years and performed over 50 shows, including prestigious acts for ISB Hyd, IIT Roorkee, Taj Festival Agra, RC Live-Delhi and many more.
Their brand of fresh rock sound blends to create an experience that is being hailed by many as the Next BIG THING in the Indian music scene.
Musafir is led by Fame gurukul part 2 (Fame X) fame Ashutosh, who has learned the tricks of the trade from the industrial big shots like Palash Sen, Daler Mehndi, Soumya Rao and Ganesh Hegde.