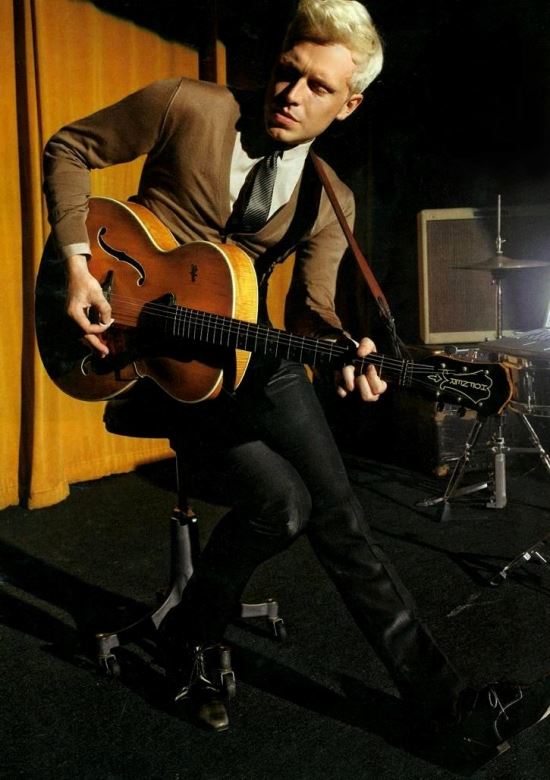 Benjamin Hudson McIldowie (born 1979 in Birmingham, England), better known simply as Mr Hudson, is a British singer and producer signed to Kanye West's G.O.O.D. Music label. Formerly known as Mr Hudson & The Library along with his backing band they released their debut album, A Tale of Two Cities, in 2007. His debut solo studio album, Straight No Chaser, was released in 2009 and featured guest appearances from Kanye and Kid Cudi. He also sings the hook on Jay-Z's hit single Young Forever.
He has listed various influences, most notably Chet Baker, David Bowie, The Police, Andre 3000, Marvin Gaye, The Specials, Billie Holiday, Rosster, Ella Fitzgerald and Dizzee Rascal. When he was with The Library they were known for their energetic live performances which include steelpan and a piano. They were nominated for "Best Newcomer" at the 2007 UK Festival Awards.
Mr. Hudson has worked with acts such as Kanye West, Dizzee Rascal, N-Dubz, Kid Cudi, Tinie Tempah and Jay-Z and toured with Calvin Harris. His vocal performances have been compared to those of Sting.[3] He is accompanied by Joy Joseph (vocals and steel drum), Rob Barron (electric keyboard), Raphael Mann (bass guitar) and Andrew "Wilkie" Wilkinson (electric drums).
One of his first appearances was on JUMPOFF producer battles in 2005. Mr Hudson first came to prominence after featuring on Later with Jools Holland on 8 December 2006. The band's debut LP titled A Tale of Two Cities, was released in 2007 to strong reviews and received national airplay on Jo Whiley and Zane Lowe's BBC Radio 1 shows.
In 2007, Mr Hudson and his band The Library embarked on a tour through 12 British libraries as part of the 'Get It Loud' initiative, and also supported Amy Winehouse on her tour, along with Paulo Nutini, Mika and Groove Armada.[5]
During the summer of 2007 they appeared at several UK festivals, such as Glastonbury, T in the Park, The Big Chill, V Festival, Godiva Festival, and Bestival. In October 2007, the band played at the Millennium Stadium in Cardiff in support of The Police. They also supported Kanye West on his Europe leg of his Glow in the Dark Tour, performing in Dublin and other European cities.
On 11 November 2008, "There Will Be Tears" was given its first UK radio airplay on Zane Lowe's BBC Radio 1 show as 'The Hottest Record in the World Right Now'. Mr Hudson's new album – given a working title of Straight No Chaser[6] is set for release in mid-2009 with Kanye West acting as co-producer. As announced in December 2008, Mr Hudson will tour the UK to preview material from his forthcoming album visiting cities such as London, Cardiff, Glasgow and Newcastle.
Mr Hudson featured on Paranoid on Kanye West's fourth album, 808s & Heartbreak. He also co-produced "Street Lights" as well as supplied additional vocals on "Say You Will" and "Amazing". Kanye West has stated: "I believe Mr Hudson has the potential to be bigger than me, to be one of the most important artists of his generation" In the autumn of 2009 Mr Hudson will support Calvin Harris on his UK tour.
A Tale of Two Cities (2007–2009)
The production ... on the band's debut album uses acoustic guitar interspersed with classically informed piano, soulful, Motown-inspired backing vocals and bass guitar, steelpan, electric drums and unusual rhythm patterns to create an expansive sound. Two of the tracks from A Tale of Two Cities are covers; "On The Street Where You Live", ..................mr hudson rules.................is a cover of a number from the musical My Fair Lady[9] and "Everything Happens to Me" is a well known Great American Songbook classic as popularised by the likes of Frank Sinatra and Chet Baker. The album was greeted with warm reviews from the music press.
[edit]Straight No Chaser (2009 – present)
According to Amazon.com, on 1 December 2009, Mr Hudson is set to release a new album, Straight No Chaser (via G.O.O.D. Music and Mercury Records), executive produced by Kanye West.
"I wanted to make a mainstream record, not structured or ornate," he explains. "The first album feels like an Escher drawing, all these layers and you don't know where you're going at any point. The way the songs are written and produced on this one is much more direct. It's not trying to reinvent the wheel. It's straight, no chaser.