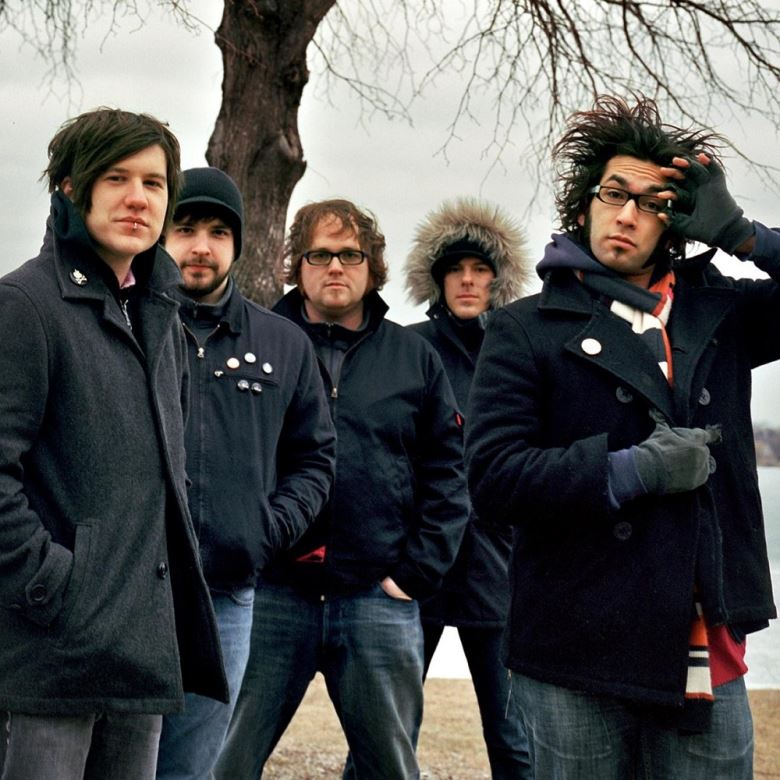 Motion City Soundtrack is a pop-punk band which includes members Joshua Cain (guitar), Justin Pierre (vocals/guitar), Jesse Johnson (Moog), Matthew Taylor (bass), and Claudio Rivera (drums). Following their high-school graduation, Minneapolis, MN natives Pierre and Cain -- both of whom were inspired by Sunny Day Real Estate, Jawbox, the Flaming Lips, and Superchunk -- formed the band in 1999. The pair assembled a temporary lineup and issued a self-released 7" that same year. Later, while touring through Pennsylvania in support of their release, Motion City Soundtrack met Thaxton and Taylor of the Virginia-based band Submerge. The two musicians decided to leave their hometown of Richmond, VA, to join Motion City Soundtrack full-time, and the expanded band soon entered the studio with producer/engineer Ed Rose (the Get Up Kids, Ultimate Fakebook). Three weeks before recording commenced, they were also joined by keyboardist Jesse Johnson (whose personal record label, Ordinary Records, had issued some of Jimmy Eat World's earliest material in 1995) to relieve singer/guitarist Pierre of his synthesizer duties.
With a new lineup firmly in place, the band's punk-glazed debut, I Am the Movie, was released in the summer of 2003. While playing venues and basements in support of the album, Motion City Soundtrack was picked up by Epitaph Records; later, they joined blink-182 on a tour through Europe and Japan. Blink's bassist, Mark Hoppus, took a liking to the band and agreed to produce their next album; the resulting Commit This to Memory was released two years later and featured an increasingly pop-heavy sound. A deluxe version of the album (complete with bonus DVD) appeared in 2006, and the band spent the summer on Warped Tour before heading to Europe with OK Go that fall. Entering the studio for the third time, Motion City Soundtrack began to work with producers Adam Schlesinger (of Fountains of Wayne), Eli Janney (of Girls Against Boys), and Ric Ocasek (of the Cars). The completed product, Even If It Kills Me, was released in September 2007.
On January 19, 2010, Motion City Soundtrack released a new full length album entitled "My Dinosaur Life".
In June of 2012, Motion City Soundtrack released it's 5th full-length album Go. The album takes the classic clever lyrics and upbeat MCS that we all know and love in a new direction. Editorial Review: "Returning to their longtime label Epitaph to release Go, Motion City Soundtrack present the most mature and developed album of their long career. Continuing a dichotomy between upbeat music and darker lyricism that stretches back to their breakout single 'The Future Freaks Me Out,' Go sees the band both maturing lyrically and musically while reinvigorating the signature melodic, keyboard driven sound that their longtime fans love. Despite the full circle musical evolution they ve undergone with Go, the band members agree that in some ways they feel like the same way they did when Motion City Soundtrack was starting to make their mark in the early 2000s (source below)." Drummer Tony Thaxton left the band in March 2013 and was replaced by Claudio Rivera.