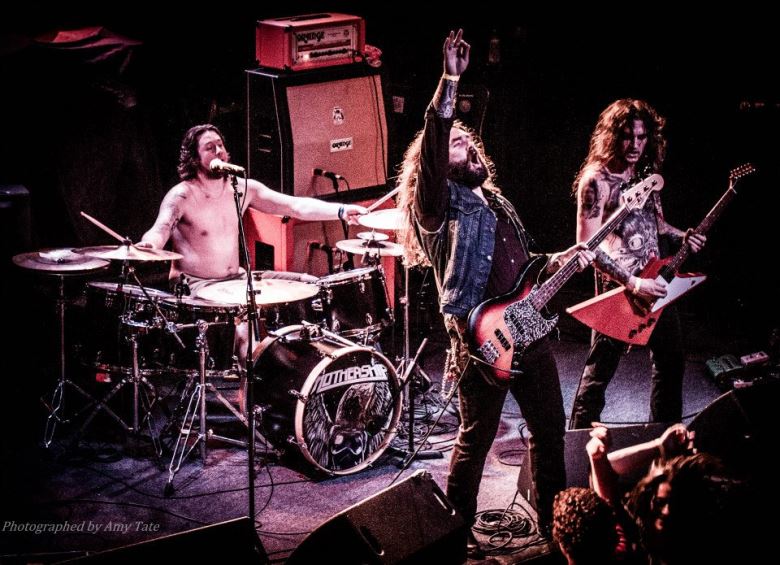 Four bands share the name Mothership: one in the UK, two in the US, and a new one in Portugal. For the early 90’s metallic hardcore crossover Erie band, see Mother Ship.

(1) Mothership (UK)
The Mothership began its tempestuous journey at low tide on the murky back waters of The Steel City. Cultivating a penchant for the dark, dirty and electronic, as well as a nefarious sense of rhythm and funky guitar-based melodies, the band forge together to produce a melting hot cauldron of sound as diverse as it is audibly pleasing. And they're partial to a nice cup of tea as well!
Members:
Will - Lead vocals, acoustic guitar
Geez - Lead guitar, vocals
Steph - Synth/keyboard, vocals
Lucy - Drums
Allan - Bass
The band released one EP The Space Lamp EP in 2004, and contributed to a compilation of Sheffield bands called Knives And Forks, released in 2005. Mothership are currently embarking on a "hiatus" from Earth, though Lucy can be found drumming for Sheffield band Cats:For:Peru, Geez is bassist for ToasterRazzu and Will is a solo artist as Web Sheldon.
(2) Mothership (US)
Mothership was assembled and developed in the winter months of 2005 in Denver, CO. After a bottle of champagne was broken on her bow, she began her epic voyage of exploration and discovery. Ever since, her crew has kept her in ship shape as she sails into the psychedelic horizons of destiny. The founder of Mothership, Adam Shaffner (Vocals, Guitar, Mandolin, Theramin, Saxophones), began writing songs about alternate dimensions and robotic friends with only an acoustic guitar and soon realized he could not continue such an undertaking on his own. He called upon the friendships of his childhood to join Mothership's illustrious crew: James Barone (Drums, Guitar, Vocals), Brian Marcus (Guitars, Keyboards), Robert Ballantyne (Bass), and Brendon Schulze (Guitar, Percussion, Trumpet). Conjuring the influence of their predecessors (Syd Barret, Neil Young, Hawkwind, Gong, et. al.), they will take you with them into a place they call the "MultiVerse", a psychedelic realm of mystery and self-discovery whose stories are told through an array of catchy pop tunes and massively arranged space rock. Their first record, "The Eleven Dimensional Symphony" is a concept album about the end of the Earth, an escape in a home-made spaceship, and the adventures that follow. Released May 2007.
(3) Mothership (US)
Randy Rose, known for his work with the bands Rose and Mad at the World, started a new project titled Mothership in the late 90s and released 2 records: 1) L.P. was released in 1997 on the Plastiq Music label started by Joy Electric brainchild, Ronnie Martin. 2) Rockstar was released in 2002 on Randy's own Hindenburg label.
(4) Mothership (US)
Supersonic intergalactic heavy rock trio Mothership based out of Dallas, Texas give a real sense of hope that all is well in the universe, and that pure honest rock and roll has once again returned to this planet on a mission to unite true believers. Consisting of brothers Kyle Juett on bass/lead vocals, Kelley Juett on guitar/vocals, and Judge Smith on drums, these guys have created a unique sound that satisfies like a steaming hot stew of UFO and Iron Maiden, blended with the southern swagger of Molly Hatchet and ZZ Top, paired with a deadly chalice of Black Sabbath. Mothership’s goal from the beginning has been to carry on the tradition of the classic rock style of the ’70′s, updated and amped up for the modern day. The band has been non-stop road warriors since the release of their debut album in February 2013 on Ripple Music successfully invading the United States, Canada, United Kingdom and Europe playing either on festival stages, night clubs, or outdoors under the sun at motorcycle parties. This heavy rock juggernaut has only just begun their tear across the universal cosmos and have no plans of ever slowing down. Do not miss your chance to hop on board and join Mothership.