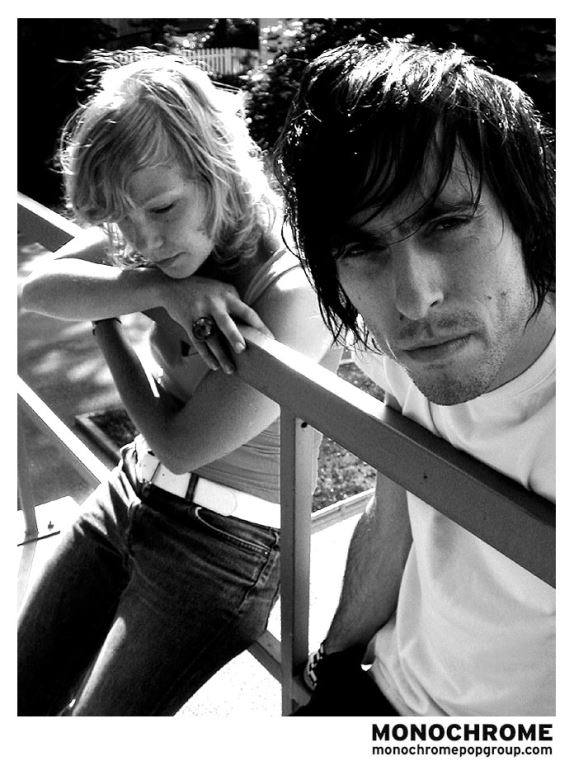 There are three artists with this name:
1. an independent group established in 1996
based in Stuttgart, Germany and Basel, Switzerland.
2. a Romanian electronic trio
3. alias of Charles Noel
4. Alternative rock band from Singapore
1) There was a time when the band we know today as Monochrome went under the name of Dawnbreed. They were a hardcore band that began to work different musical elements into their sound. Pop, indie, noise... you can hear it all in the six singles and two LPs that they released between the years of 1994 and 2000. With added female vocalists and a saxophone player it developed into the Dawnbreed/Monochrome Collective, opening doors for them musically without forfeiting an ounce of their live qualities. Energetic, almost brutal guitar-pop that couldn’t be topped in intensity, combined with the best that punk and hardcore had to offer: that was the mixture that nobody could resist.
The band continued to release their music under both band names and in 1999 the first Monochrome Longplayer, “Laser”, saw the light of day. In 2000, mainly due to their drummer quitting because of health reasons, they decided to permanently end the chapter known as Dawnbreed and continue solely under the Monochrome moniker.
Then came a period of personnel changes which led to the series of shorter format releases following “Laser”. Top priority was to teach the new members the existing songs instead of just writing new material. But this also meant that each of these releases can be seen as representing the status quo of the band at the time of recording, or as individual chapters in the band’s progression. It was also important to the band to always have a new release when they went on tour. During this time they toured four times extensively across Europe as well as twice on the US east coast, where they were able to play in such legendary clubs as the ABC No Rio in New York and the Black Cat Club in Washington DC.
The revolving door of Monochrome members has since stopped, leaving the band with a steady line-up. The members are, however, spread across hundreds of kilometers in central Europe. Four live and work in Stuttgart in southern Germany, while the other two are based in Basel, Switzerland. But with good organization and strict planning this has proved to not be a disadvantage to the band’s creativity in any way.
It’s difficult to try to pigeonhole Monochrome. You can try calling their music indieguitarrockhardcorepop....or you can just listen to their new album. “Èclat” is the band’s first longplayer since “Laser” and was released at the end of January 2006 on Sticksister Records. It was followed by a tour through France, Spain, Belgium and Germany in February/March as well as several european summer festivals and more shows can be expected in the coming months.
monochrome's website
2) Monochrome (Livio & Roby feat. George G) from Bucharest, Romania, won the Heineken Thirst Studio Global competition which searched the globe for up and coming producer talent. As part of their prize they worked with Gabriel & Dresden on their track Pearl in the legendary Palm Studios in Las Vegas.
Before getting to play in Europe and America alongside Steve Lawler, Sasha, John Digweed, Danny Howells, Groove Armada, Gabriel & Dresden, Erick Morillo, Sander Kleinenberg, Booka Shade, Luciano, Desyn Masiello, Lee Burridge, Carl Cox, 2manydjs, Audiofly, Scarlett Etienne, Tiësto, to name just a few, the Romanian DJs and producers called Monochrome dedicated all their passion and time into music.
Livio is a highly regarded DJ and producer on the Romanian electronic scene and increasingly the international circuit with over 10 years experience under his belt.
Robert Precup aka Roby got into DJing after 10 years of production in alternative and electronic projects. He played both piano and guitar, wrote music for various films and documentaries, TV / radio commercials and found his production match when he met Livio, in 2004.
Together they started to DJ and produce under the Livio & Roby alias. Since then, they have been produced tracks that are increasingly included on the international DJ chart.
In 2005, three of their productions, Bitter Sweet (Terrace Mix), Headz On and Out Of Bass were included on Steve Lawler's compilation - Lights Out 3 (Global Underground).
The tracks were released on labels like Stereo and Global Underground (Lights Out 3 - Disc Sampler part 1). More recently, tracks appeared on compilations like
Steve Lawler’s Viva [Ministry of Sound] and Hernan Cattaneo’s Sequential Vol.2 [Renaissance], resulting in Livio & Roby becoming Viva Music artists and being heavily supported by Steve Lawler.
Along with George G., working under the name of Monochrome, they have a series of already and yet to be released tracks. Productions like Mondovista, Cascade, Break, Cristal, Supercar, Monochrome are still hitting the dance floors worldwide, and been released on labels like Viva Music, Solace Digital Trax, Only Records…etc.
As a live act, Monochrome raises the energy on the dance floor. In the summer of 2007 Monochrome were the ones that opened up the first edition of the Romanian edition of B’ESTIVAL for artists like Morcheeba, Hooverphonic and Faithless. Monochrome also played in Las Vegas, Seattle, New York, Croatia, Amsterdam – at both worldwide known festival - Dance Valley - and music exhibition - Amsterdam Dance Event - where they represented the Eastern Europe music industry at seminaries and played during the amazing events that take place there every year.
By the end of 2007 they saw themselfs "traped" in the studio producing tracks for their first album called Monochrome - "Children of House FWD 01" [Ido Music].
If you think you seen it all, stay tuned because this was just the beginning.
"Winning Thirst Studio was a deserved victory for them, their track 'Pearl' is a simmering minimal house track that could easily warp dancefloors out of recognition. Already having contributed to Steve Lawler mix compilations, it's clear that 'Pearl' is another step in the journey towards stardom." DJ MAG JULY 07
3) Monochrome is the alias of Charles Noel who also records under the alias Archetype. Monochrome is credited with releasing the first U.S. Drum & Bass record entitled the "Reconnaissance EP."