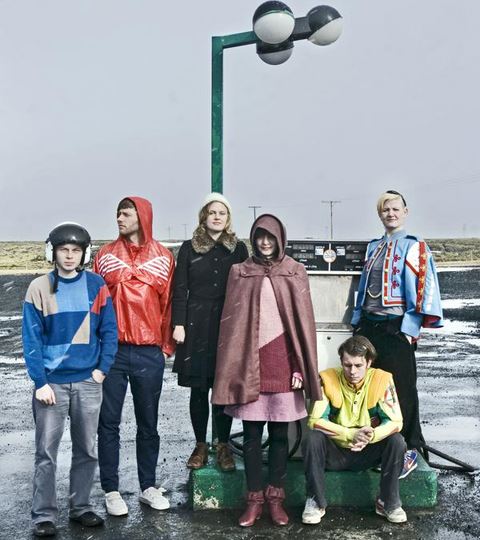 múm (pronounced [muːm], “moom”) is an experimental electronic group from Iceland whose music is characterized by soft vocals, eccentric beats and colorful effects, and a variety of traditional and unconventional instruments.
Originally a duo, the band has expanded and contracted in the 12 years of being and has counted 15 - 20 people along the way.
The band was formed in 1997 by original members Gunnar Örn Tynes and Örvar Þóreyjarson Smárason, their first release was a split 10" with the girl-band Spúnk and saw light in the summer of '98. They were joined a year later by twin sisters Gyða and Kristín Anna Valtýsdóttir and released two albums as quartet. Following a number of collaborative projects, the group’s celebrated debut album Yesterday was dramatic - today is OK (reissued by Morr Music in October 2005) gained a wealth of glowing press and widespread praise. A remix project, Please Smile My Noise Bleed, also released on the Morr Music label in November 2001.
In 2002, after the release of Finally We Are No One and the extensive first world tour, Gyða left the band to return to her studies in Reykjavík. Shortly after, the third sister Ásthildur Valtýsdóttir joined for singing duties temporarily and Serena Tideman replaced Gyða on cello, for a single European tour. The band's third album, Summer Make Good, a darker and foggier, nautically themed work was released in May 2004, flanked by two singles, Nightly Cares and Dusk Log. By then the ensemble had evolved to include Eiríkur Ólafsson and Hildur Guðnadóttir (who had guest appearances on múm recordings from the beginning) and Ólöf Arnalds. In early 2006, Kristín also left the band after releasing and heavily touring the album Summer Make Good.
The start of 2006 saw the band's creativity start to blossom once again, starting with two remixes Goldfrapp of the tracks ‘Number 1’ and ‘You Never Know’. They followed this with two legendary DJ sets at the FatCat Festival in Belgium in February and SXSW in Austin Texas 2007. With a combination of decks, effects, laptops, toy microphones, old cassette player recordings and vocals, coupled with their own recorded material, strange electronic covers by friends, gypsy folk music and general craziness on stage. They were also subsequently invited DJ at Summer Sonic Festival in Japan as well as be headline act as DJ's in Radio 1’s Rob Da Bank tent at Bestival on the Isle of Wight. In september 2007 múm released Go Go Smear the Poison Ivy which turned out to be the bands last release for the Fatcat Records.
múm has always worked on projects which could be classed as unusual for a pop band or a pop collective. Among their extra curricular activity is their own soundtrack for the classic Sergei Eisenstein film, 'Battleship Potemkin', live performances of which have taken place in Hafnafjordur Iceland, Brooklyn Lyceum New York, and at the distinguished Gijon Film Festival Spain. múm have also composed for theater, most notably two radio theater plays, 'Svefnhjólið' (Sleeping Wheel) by Gyrdir Eliasson which won the Nordic Radio-theater prize and in 2008 Augu þín sáu mig (Your eyes saw me) by poet Sjón (which múm also worked with in 1999 on the operetta Kisa (cat). In 2005 they were invited to Amsterdam by the Holland Festival to collaborate with the National Dutch Chamber Orchestra to create a performance piece based around various compositions of the late avant-garde composer Iannis Xenakis for one of the centre piece shows at the festival.
múm released their fifth studio album, Sing Along to Songs You Don't Know, in August 2009. The collective now consists of founding members Gunnar Örn Tynes and Örvar Þóreyjarson Smárason and for touring and recording, this line-up is expanded to include their friends Eiríkur Orri Ólafsson (trumpet / piano/ keyboards), Hildur Guðnadóttir (cello / vocals), Sigurlaug Gísladóttir (Vocals / ukulele/ various), Róbert Reynisson (guitars/ukulele's) and the Finnish Samuli Kosminen (drums / percussion). The musical group sometimes extends to Ólöf Arnalds, Högni Egilsson, Ólafur Björn Ólafsson and Guðbjörg Hlín Guðmundsdóttir as well as a never ending family of friends and musicians who may join at the drop of a hat.
Official website: http://www.mum.is