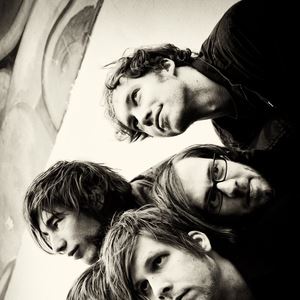 There are, at least, five artists known as Miyagi: 1) A German disco / post-punk band. 2) A UK country surf / funk quintet. 3) A Mexico ambient band. 4) A USA band. 5) A pseudonym of David Best (Fujiya & Miyagi founder).6) a german Dj & producer
1) A Münster, Germany disco / post-punk band. In early 2008, they were signed by Berlin based label Richard Mohlmann Records. A self-produced EP was released in 2007. Finally born in Nov. 2008, their debut album named "Hydraulic Son". Miyagi was formed as a three-piece instrumental band in 2004. Now: Stefan Matysick (voc, dr), Daniel Ortega (dr, voc), Felix Prescher (g), Jörn Krüßel (g) and Axel Schinkel (b).
Official site: Miyagi-Music.De
2) An Edinburgh, UK harmony-soaked 'country surf' / funk quintet. All multi-instrumentalists, each with their own unique singing voice. Following in the footsteps of The Band and The Byrds, the Edinburgh band have no frontman, preferring to let the songs dictate who should sing, whether alone or in 5-part harmony.
Encouraged by indie record label interest Miyagi self-produced and released their first EP 'Dragonfly' in 2005, which quickly sold out, and was named in Music News Scotland's top 12 CDs of last year. The band are now going one step further and recording their debut album set for release later this year. This hasn't slowed Miyagi's live performances, however, and they have upcoming shows in Edinburgh, Glasgow and beyond. There are also plans afoot for a UK-wide tour to support the release of the album, later this year.
Their uniqueness comes from the fact that they operate in what are typically eclectic musical circles, yet manage to capture catchy, accessible melodies in their vocal harmonies. Miyagi are as at home filling the dancefloor of a dj'd club night as they are playing an intimate, more song-based acoustic gig. It is this versatility which might explain the size and diversity of their following.
Since Miyagi began back in 2002 they have been an ever-present on the Scottish scene, playing with such illumini as Mani (Primal Scream, Stone Roses), TV Smith (The Adverts), William Mysterious (The Rezillos), The Very, Bombskare, William Douglas and the Wheel. Their live performances have taken them everywhere from New York (CBGB's, Sidewalk Cafe, The Bitter End) to the Scottish Highlands. In between, highlights inclue performing at the Edinburgh Festival Fringe every year since 2002.
3) A Mexico ambient band.
4) A Fairfax, VA, USA band that crushed people's souls with one song. Their drummer, Jespah Lara, is famous for his masterful execution of the off-stage move called The Gorgon's Breath. They only released one 7-track CD called The Special Providence In The Fall Of A Sparrow.
The band Miyagi is no longer together, however, some of the member still make music together and Jespah still rocks the Gorgon's Breath whenever he can.
5) A pseudonym of David Best (aka Best), a Brighton, UK singer-songwriter / guitarist / keyboard-player & a founding member of Fujiya & Miyagi (providing: vocals, guitar & Korg).
6) Hamburg based Miyagi aka Robert Wagenknecht . influence: deep tech house
Katermucke
der Turnbeutel
http://www.residentadvisor.net/dj/miyagi