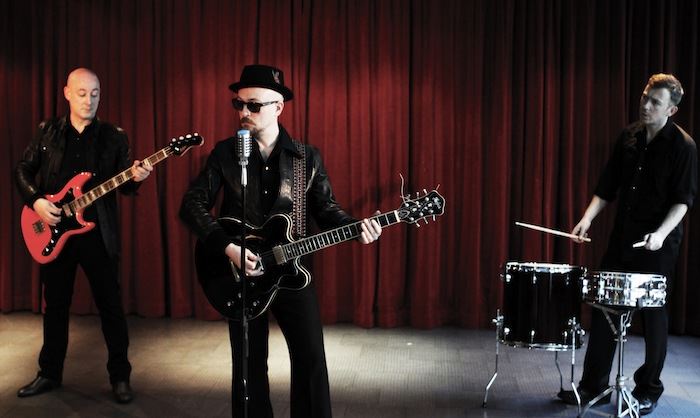 London trio Miraculous Mule make rock ‘n’ roll infused spirituals and dangerous blues.
These boys have been cutting their teeth and earned their stripes over the years with a devout immersion in gothic American roots music, before that particular bandwagon arrived in town again, and again after it left. Brothers Michael J Sheehy and Patrick McCarthy were born into a rock’n'roll- home, with Elvis and Tammy as surrogate parents.
Michael J Sheehy has fronted Dream City Film Club, his self-titled solo work and the Hired Mourners and Saint Silas Intercession, with his brother Pat at his side for the most part. Witnesses to these outings of theirs will know that the soul and the confrontation they sweated was, and is, real. They can play and they can sing. The edge that they skirt likely comes in part from their school of hard knocks, central London council-estate , Irish Catholic upbringing. Michael, Pat and Miraculous Mule’s third member and old friend Ian Burns were raised in the same estate (Saint Silas in Kentish Town).
Live and on record, Miraculous Mule do indeed kick like their namesake. Mixing up old spirituals, blues and work songs. The real deal, testament to which is the inclusion of their first single Satisfied on Blues magazine’s current covermount CD
MIRACULOUS MULE Announce Brand New Single Dangerous Blues: 23rd September 2013- Ahead of the Release of Debut Album Deep Fried: 7th October 2013
Released by Bronzerat Records/Muletone Recording Company.
Nothing comes from nowhere. The mule, the miracle plough-puller, the humble and mighty tiller of the earth, is blessed and cursed with a dubious origin. Likewise, though their nativity was in London in the latter half of the last century, these Anglo-Irish honkeys know that their souls were forged further back and farther west. Fallen into hell’s ditch, baptised in brimstone, reborn in the devotion of African-American Gospel, the pain of penitentiary work songs, the jittery stomp of hillbilly rock. Creeping with shovels to the lonesome resting places of traditional folk, delving deep into the treasures of song that lie beneath broken soil, loading a wagon under cover of night, they have electrified and reanimated those borrowed remains with a newfound urgency, melancholy, rage and beauty.
As a lost soul in chains once observed, even the ugliest train looks pretty through the cold bars of a cell. Rattling its way to redemption, with evil on its mind, the one-eyed machine follows an impossible route on ghost rails through a landscape of folk and country: Jackson, Mississippi. Memphis, Tennessee. New Orleans, Louisiana. Big Rock, Arkansas. Old Funk, Georgia. A legendary south of country preachers, forgotten jailhouses, jaded dreams of salvation. But always the irresistible, insidious, inevitable pulse of the dangerous blues. Wheels pounding the track. The guitar pick, the drum, the clap, the holler, the cry, the need never satisfied. The runaway monster roars into a tunnel, a smoke-choked furnace of devil cries and sulphur, then back into the night, screaming off the rails, blazing down into a canyon, to a final, raucous reckoning of steel and flame.
Dark night, cold ground. Wreckage sizzles. Buzz of crickets like a legion of derelict amps plugged into hell’s socket, gathered to wail their lament. Sad moonlight on the cornfields. Then, after a long moment that lasts for seconds or for centuries, aching gears grind again. Scorched to its bones, trailing its metal guts, three dozen iron wheels clawing the canyon wall, the ancient beast resurrects. The Miraculous Mule Train drives on, railroad or no, ploughing the black earth of night to the dawn that does not come. But this is mere prophecy. The train is only now leaving the station. Get on it.
Michael Brett