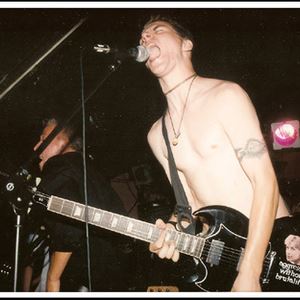 Six artists exist with this name.

1) Mind Over Matter
Mind Over Matter blends various electronic styles (such as Trance, Ambient, Dubstep, etc...) to create a unique style all in it's own. Hailing from the "Dirty South" San Antonio, Texas, U.S.
Mind Over Matter consists of composer Corey Stanley, along with production help from Matthew Coyne, to bring a soothing, relaxing, yet get up and dance kind of music to the listeners. Established in late 2010, Mind Over Matter has composed and arranged two albums, "Silence the Violence Inside" (2011) and "Configuration Eight' (2011) which will be released pending some final production values and vocals tracks. Most of the music is instrumental, using a myriad of different instruments and sounds, all blended to create a different listening experience than most forms of electronic dance music. Currently under KatKnip Productions
Releases:
Silence the Violence Inside (2011)Configuration Eight (2011)
Configuration Eight
Leave Me Be
Taking The City By Storm
http://www.soundcloud.com/mind_over_matter
http://www.soundcloud.com/mind_over_matter_music
http://www.facebook.com//Artist.MindOverMatter
http://www.youtube.com/user/LinkandPage
contact info:
email at mindovermatter@hotmail.com or KatKnipProductions@hotmail.com
2) Australian Hip-Hop group.
Mind Over Matter are quickly establishing a place amongst the most popular independent hip-hop acts in Australia.
Mind Over Matter have already been listed by many, including Acclaim Magazine, as one of Australia’s most promising up and comers. Through a combination of their high energy intricate live show, charismatic, diverse, creative, well thought out lyrics, mixed with their drive for success and their love for their music they are a duo to certainly keep your eyes and ears on.
Since bursting onto the scene in early 06’ with their first release “For Our Hip Hoppers” they have since supported international acts like Masta Ace, Wordsworth, Planet Asia, DJ Crazy Caz (the late Tupac’s DJ), Dos Noun, Mystro (UK) as well as Australian greats Bliss n Eso on the NSW leg of their “National Get Loose Tour”, Muph & Plutonic, Phrase & DJ Flagrant, Def Wish Cast, Hyjak N Torcha, Figgkidd plus more.
M.O.M. have made their mark on various festival stages as well, including Sydney Uni’s “Kick Up The Dust”, Olympic Parks “Groove Urban Festival”, Wild West II, Nurcha Fest; Brisbane to Melbourne to Adelaide tour, and Sydney University’s Octoberfest just to name a few, all the way attracting multiple radio, magazine and television interview’s gaining them a concrete, and ever growing fan base.
In addition to this the duo have let their presence be known internationally, travelling to Osaka, Japan, performing 2 incredibly well received shows as well as filming a video clip for a collab track titled “How We Get Down”.
2005 saw Mind Over Matter take out the cash prize at the St. Pius ‘Battle Of The Bands’ annual competition. They were entered as the underdog/wildcards as it predominantly was a rock comp!
Willow & Smiles know this is only the beginning and value everyone’s support. After their mixtape being so well received, the Mind Over Matter boys have been busy in the studio and have completed their Debut LP “Keepin’ It Breezy” being released on Nurcha Records in early 2008. With production and feature verses from international and personal influences of the boys as well as some of Australia’s very best, “Keepin’ It Breezy” is guaranteed to be more than another shelf release it promises to be a body of work covering more than what one would expect.
Releases
• For Our Hip Hoppers Mixtape (2004)
• Keepin' It Breezy (2007)
• Free The Wolves Mixtape (2009)
www.myspace.com/mindovermatteraus
3) New-York Noisecore-influenced Hardcore band, feat. members of Error Type 11 and Milhouse.
Seven years before the mainstream media was hailing screamo as the next big thing, Mind Over Matter were accidentally inventing the genre in front of floored hometown crowds. Unfortunately, the band never drew the same sort of enthusiasm outside of Long Island until after they’d broken up (and vocalist Artie Shepherd had moved on to Errortype:11 and, currently, Instruction); but it didn’t matter. Those kids from Glassjaw and Thursday who were in the crowd at Mind Over Matter’s gigs had already seen the future.
Releases:
• Mind Over Matter 7" (1992)
• Hectic Thinking 7" (1993)
• Security LP (1994)
• Automanipulation LP (1995)
4) German band around Klaus Hoffmann-Hoock. Current line-up consists of Hoock (guitars, sitar, megatron), Peter Jörgens (percussion), Robert Valet (keyboards, Mini Moog), Dagi Daydream-Hoffmann (vocals, performance), Volker Kuinke (recorders). Active since the 1980s and famous for their psychadelic melt of 70s Rock, Ambient and New Age.
Albums:
• Music for Paradise (1986/1991)
• The Colours of Life (1988)
• Trance 'n' Dance (1989)
• In Search of Eternity (1992)
• Live in Concert (1993)
• Palace of the Winds (1995)
• Shambala (1997)
• Avatar (1998)
• Under the Stars (2000)
• On The Wings Of The Wind (2004)
• Indian Meditation (2005)
• Indian Meditation II (2006)
They have also released four DVDs with various live performances.
Website: Mind Over Matter
5) US House duo Matt Echols and Romain Gowe. Releases include "AAH-HA" (12", 1988) and "Everbody's Doing It" (12", 1992).
6) A rock group from Estonia.
Website: Mind Over Matter
https://www.facebook.com/TheMindovermatterBand