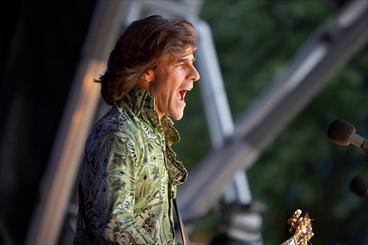 English born, raised in Ibiza from the age of five. Distinctive Balearic upbringing, almost a hippy - could have gone either way. Still holds a torch for sarongs and colourful shirts.
Very Beach. Windsurfer (non-competitive). Natural knack for teaching the sport... "Rule 1: Don't get wet... Rule 2: Think Reggae!" Sounds mad, but works.
Spent time (9 years) in Hamburg developing more life-skills. Learnt another language, travelled from there to distant lands such as Turkey, Poland, Russia, all before the wall came down.
Won songwriting competitons infront of 270 million TV Viewers - that's Intervision, the communist Eurovision... East Berlin to Beijing!
After a pretty rough ride in Hamburg, things got better. Then worse again. Miles moves to London in 94... and starts gigging.
Released first Live CD in london in 2000 on his own label, Chocolate Box, winning many loyal fans. "The Acoustic Fashion Accessory of the Summer" it was referred to as by most. A Balearic Blues thing featuring lots of Spanish Guitar (Stephen Dunphy) and Feliciano-style vocals. Very Mediterranean. Successful shows at this time include the Jazz Café, The Bull's Head (with own 7-piece band), Café de Paris (Trio), and the Café Royal supporting Alan Price.
Through circumstance gets introduced to producer Steve Brown via Penni Pike, Richard Branson's Exec. P.A. and a working relationship begins to bud. Rocco Gardner, a young entrepeneur, forms an independant label and backs the project, and Winter Roberts is established under Sidewalk 7, with Steve Brown (Wham, The Cult, Manic Street Preachers) at the production helm.
Recording starts in April 05, with the band now being embellished to a 12-piece. The first EP, 'Escapado', hits the streets by mid summer, and is quickly mouth-to-mouthed about until it gets as far as New York, San Francisco, LA and even Thailand. There's a definite Island Sound to it, which goes down well in a current climate of minor-keyed offerings...
September sees performances in NYC's The Cutting Room. October, the Label launch in London. More professionals climb aboard, swept along with the uplifting attitude and sound of it all, and we start to talk release dates... Winter Roberts sells out Ronnie Scott's on Sunday the 8th of January... BBC Radio Two's Steve Wright picks up on the track, and starts playing it on his show.
Dave Lee Travis invited WR to appear on his BBC 3 Counties Sunday morning show, (March 12th), chatting and playing live in the studio. He likes the track, and explains that the response to it locally has been very good...
"Head in Your Cloud" is released on March 20th, 2006. Available in most stores, or via the site as a download.
Biography Update:
After 'Cloud', plans to finish the album divert to recording it straight from scratch, live, in front of 200 people at The Bedford in South London. Known for its hospitable nature and personality, it seemed an obvious choice. The decision to record live became apparent when, after the first 10 minutes of any rehearsal Roberts had with his band, he felt it a shame there was no one around to enjoy it. A compliment to his band, no less!
In the meantime, Winter Roberts has become involved with The Big Issue after playing at the vendors' Christmas bash in January. A free download for the magazine is arranged, infact the beginning of a new weekly feature in the magazine, and Winter Roberts is the founding artist with "Don't Lose Your Home", a track written in his near-destitute Hamburg days. It gets recorded live on the same day as the album.
'Daymaker' is recorded on May 21st, mixed with a minimum of editing (once again - Steve Brown), and ready to go 3 weeks later. It has received wonderous acclaim from those who have heard it. Although due to be released on the 4th of September ('06), it has been made available as download from the website. (www.winterroberts.com)
Winter Roberts performs on BFBS1 in Gibraltar, after being playlisted heavily with "Sha La La La in My Life", the follow-up to "Head in Your Cloud". 2oo Million listeners are by now involved!
July 14th. Launch of The Big Issue's Download Page, with a three page spread on WR. A fund-raising event is announced, which is to take place in September, coinciding with The Big Issue's 15-year birthday celebrations. "Sha La La La in My Life" is released on July 24th - download only... it has been receiving national airplay on 10 regional stations, and Winter Roberts takes on a Radio Tour of the British Isles...