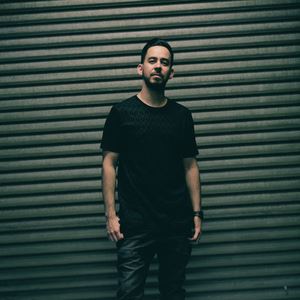 Michael Kenji Shinoda (born February 11, 1977) is an American musician, songwriter, rapper, singer, record producer and graphic designer. He co-founded Linkin Park in 1996 and is the band's rhythm guitarist, primary songwriter, keyboardist, producer, and lead vocalist. Shinoda later created a hip-hop-driven side project, Fort Minor, in 2004. He served as a producer for tracks and albums by Lupe Fiasco, Styles of Beyond and The X-Ecutioners.
Shinoda is also the co-founder of Machine Shop Records, a California-based record label. Outside of music, Shinoda is an artist and graphic designer. He has painted several pieces of artwork, some of which have been featured in the Japanese American National Museum.
Shinoda was born on February 11, 1977 in Agoura Hills, California, where he was raised. His father is Japanese. He has a younger brother named Jason. He was raised as a liberal Protestant. Shinoda's mother encouraged him to take classical piano lessons when he was six. By 13, he expressed the desire to move toward playing jazz, blues, and even hip-hop. He later added the guitar and rap-style vocals to his repertoire during his middle school and high school years.
Shinoda attended Agoura High School with Linkin Park bandmates Brad Delson and Rob Bourdon. The three formed the band Xero, and began to make a more serious attempt to pursue a career in the music industry. After graduating high school, Shinoda enrolled in the Art Center College of Design of Pasadena to study graphic design and illustration.[1] He attended classes with DJ and turntablist Joseph Hahn.
Shinoda has also served as a music producer for several other artists and groups. In 2002, Shinoda and Joe Hahn collaborated with the X-Ecutioners to produce and perform on their single "It's Goin' Down". Later in 2002, Shinoda and Brad Delson established their own record label, Machine Shop Recordings. He helped produce Lupe Fiasco's 2006 release, Food & Liquor. He extensively worked with Styles of Beyond between 2009 and 2012 to help produce Reseda Beach, which also features his instrumental and vocal contribution. In addition albums, Shinoda scored the MTV VMA's in 2005 and also worked with Ramin Djawadi to score the video game, Medal of Honor: Warfighter. In 2011, he collaborated with Joseph Trapanese to compose the score for the American release of The Raid: Redemption.
In 2004, he released a remixed single and animated music video of the 1990 Depeche Mode single, "Enjoy the Silence". In 2005, Shinoda hosted the Rock Phenomenon mixtape/remix CD with DJ Vlad and Roc Raida. The CD is the first (and to date, only) in DJ Vlad's Rock Phenomenon series (which itself is a spin-off of Vlad's Rap Phenomenon mixtape series), and features a mashup of Linkin Park's "Papercut", and David Banner's "Like a Pimp (Remix)". For the 2006 Grammy awards, Shinoda and Brad Delson assembled the mashup track of "Numb/Encore" and "Yesterday" by The Beatles to be performed live by rapper Jay-Z, Linkin Park and former Beatles singer Paul McCartney. Shinoda teamed up with former bandmate Mark Wakefield to record and release a single, "Barack Your World", in October 2008.
Shinoda contributed on the music for CNN original documentary television series, This is Life with Lisa Ling. Shinoda contributed for the title theme for American television series Into the Badlands.[64] Shinoda also provided the theme song for Noor Tagouri's A Woman's Job.
Shinoda is a third-generation Japanese American. His father and aunt were forced to live in a Japanese-American Internment Camp during World War II.
Shinoda married author Anna Hillinger in 2003. They have two children.
Shinoda was awarded with the Japanese American National Museum's Award of Excellence in 2006.[60] In 2009, Shinoda received an Honorary Doctorate of Humane Letters (L.H.D.) from Art Center College of Design. East West Players honored Shinoda with a Visionary Award and dinner in 2010. He has also expressed an interest in politics. In September 2012, Shinoda started writing articles for The Big Issue in the UK and was the publication's U.S. election correspondent.