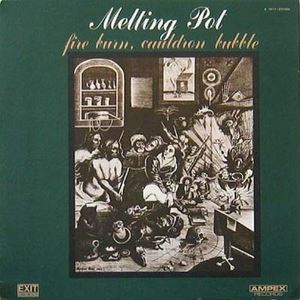 www.meltingpotband.com
This Toronto-based trio is a welcome throwback to a time when guitar, bass and drums were all you needed for a powerful and intense yet nuanced and balanced sound. Their vision is to serve the music, to pay homage to the artists they love and respect such as the Black Crowes, Grand Funk Railroad, Cream, Otis Redding, the Beatles and Led Zeppelin. Melting Pot’s sound reflects those primordial inspirations -- hard-driving rock n’ roll that effortlessly blends blues, soul, R&B, jamband and even world-music influences, with creative, honest and powerfully delivered lyrics. Whether you need tunes to help you get over life’s hard knocks or you just need a soundtrack to a raging party, Nelson Sobral (guitar & lead vocals), Darin Meilleur (bass & backing vocals) and Carmelo Galle (drums & backing vocals) make music for you.

Their songwriting and musical talents are complemented by a fresh, innovative and friendly approach to the meat grinder otherwise known as the music business. Melting Pot knows that live shows are what will make or break them so copies of their debut 5-song EP are given away freely. They want you to enjoy their music, period. Their web and social media presence instantly tells you that this is a band that understands where the world is headed, and they’re willing to do whatever it takes to get there…as long as it doesn’t involve compromising their principles or their music.

Parkdale-bred, Nelson was raised on music ranging from Portuguese folk music & Abba to Otis Redding & The Beatles, from Trenchtown to Motown, so playing guitar and writing songs came naturally. Along with forming his own bands he started to play in various rock & blues bands around town. By chance, Nelson dove into the role of “musical director” of the original “Comfort Zone” where jamming and improvising were the norm every night of the week until the wee hours of the morning. There, he played with musicians from every walk of life and every style of music, jamming with band members from the likes of Jeff Healey, Tom Cochrane and Lenny Kravitz’s bands. Eventually, out of the necessity of having to front his own outfit to play the songs the way he heard them in his head, Nelson discovered that he could vocally emulate and channel the great soul singers he admired and loved. Armed with his guitar, his voice and a song he set off to meet up with like-minded musicians who prefer to “serve the music” instead of themselves…

Nelson’s resume includes stints in The Beggarz, Reuben Cherry, Selective Collective and a ton of rock, soul, funk, blues, country & reggae bands that no one's ever heard of…

Darin began his musical career at the ripe old age of three, singing classics like "You are My Sunshine" into state of the art cassette tape recorders. By the age of 12 he started playing various instruments & settled on bass guitar when he was 17. He played in various rock & blues bands over the years until meeting up with Nelson Sobral. His playing has solidified into an aggressive, groove-driven style that matches up perfectly with the band. He brings a visceral intensity to the stage by playing for the song, but stretching out whenever the song allows.

Carmelo’s love of drumming started at an early age. Channeling music through his hands and feet, the groove came naturally to him. He easily found the pocket, stuck his hand in it and liked what he found. Carmelo has always been more of a musician who plays the drums. He realizes that it’s important to play what the song calls for, to feel it and let the groove develop on its own -- no need to be flashy if a rock-solid groove sounds best. Using the guitar riffs to develop a beat and groove for the songs is just as important to him as locking in with what the bass is putting down. Always serving the music before serving himself, sometimes floating along with a steady beat and at other times breaking sticks and skins, Carmelo’s deep passion for music allows him to effortlessly move between rock, blues, jazz, R&B and any other style.