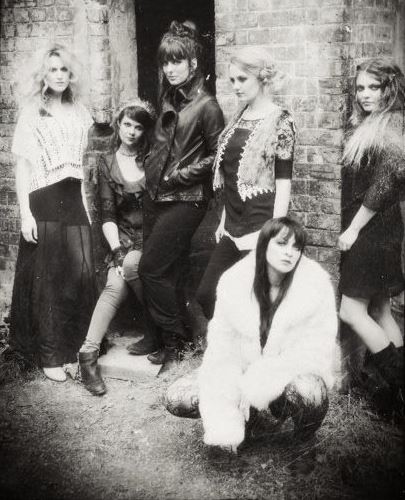 The Mediæval Bæbes are an English ensemble of female musicians founded by Miranda Sex Garden member Katharine Blake in London in 1996, featuring some of her MSG cohorts as well as other friends who share her love of medieval music. The lineup often rotates from album to album, and ranges from 6to 12 members.
The Bæbes's first album, Salva Nos (1997), shot straight to No 2 in the classical charts, a silver disc. Subsequent albums include Worldes Blysse (which went straight to No 1), Undrentide, (co-produced by John Cale), The Rose, and the Christmas-themed album Mistletoe & Wine.
Mirabilis (2005), was launched at a concert and party in London, August 2005. A self-titled DVD was released in July 2006. The first 300 preorders were autographed by the band and received a special mention in the DVD credits.
A live album was be released in December 2006 and featured two bonus studio tracks, An Itunes exclusive was also launched which added tracks not featured on the cd release and at this time still remain exclusive so is well worth tracking down.
The new album entitled Illumination was released via preorder on the bands website in Oct 2008 and as an added incentive to fans features two bonus tracks not included on the regular wholesale edition which has a Spring 2009 official release date. There has been concerns over the mastering of the album from fans which could account for the delayed release dates.
Each album features traditional medieval songs and poetry set to music, mostly arranged by Blake specifically for the ensemble, alongside varying numbers of original compositions. They sing in a variety of languages, including Latin, Middle English, French, Italian, Russian, Middle High German, Welsh, Irish Gaelic, modern English, Swedish and the nearly extinct Cornish. Their vocals are backed by medieval instruments, including the recorder and cittern, played by the singers or fellow musicians.
One of the group's founding musicians, Dorothy Carter, died of a stroke in 2003 at the age of 68. In addition to playing autoharp, hurdy gurdy, and dulcimer with the group, she performed the lead vocals on So Spricht Das Leben (Worldes Blysse) and L'Amour de Moi (The Rose).
Emily Ovenden, who sings with the group, is the daughter of artist Graham Ovenden.
The Bæbes' musical pieces run the gamut from extremely traditional, such as their version of The Coventry Carol on Salva Nos, to songs that feel traditional but are much more modern, such as their rendition of Summerisle, a song written for Robin Hardy's 1973 cult film Wicker Man. John Cale added non-medieval instruments, including saxophone and electric guitar, to some of the arrangements on Undrentide, although with subsequent albums the band returned to more traditional instruments. Even with these instruments, however, the band's current style is quite different from medieval authentic performance groups, as it displays significant modern influence.
Current Band Members:
Katharine Blake (Contralto, Recorders, Violin, Piano), Emily Ovenden (Soprano, Recorders, Concertina, Percussion), Ester Dee (Soprano), Claire Rabbitt (Contralto, Piano), Bev Lee Harling (Alto, Violin, Citern, Recorders, Guitar), Melpomeni Kermanidou (Mezzo Soprano, Piano)
former Band Members:
Dorothy Carter, Karen Lupton, Nicole Frobusch, Nichole Sleet, Carmen Schneider, Claire Ravel, Ruth Galloway, Teresa Casella, Rachel Van Ash, Audrey Evans, Marie Findley, Cylindra Sapphire, Sophie Evans, Maple Bee, Sofia Escobar, Maxine Fone
Official website: www.mediaevalbaebes.com