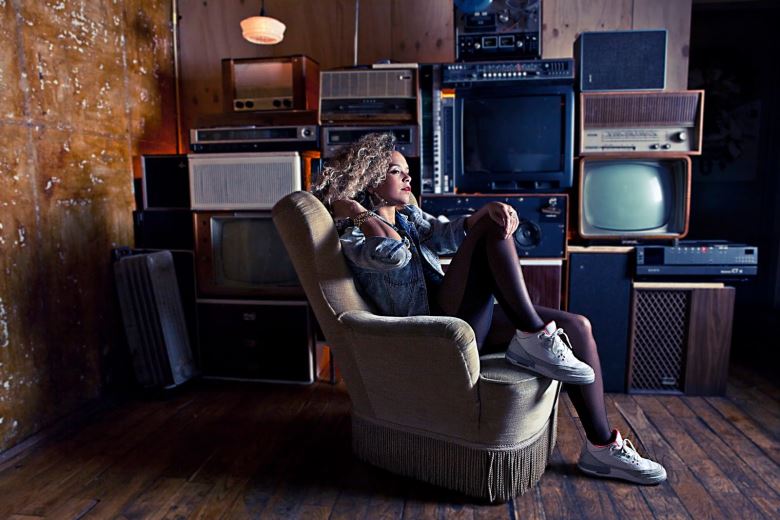 MC Melodee has been active in the music industry for over 15 years. Next to being writer, performer and leader of her band La Melodia with whom she performed all over the globe, she leads a Peer Education Project and is director of a platform for female hiphop artists "Dam Dutchess" in her home base Amsterdam.
MC Melodee, whom you might have met in the past while working at Fatbeats record store and Kindred Spirits Records Amsterdam, can be found MC-ing in Hollands club circuit in venues like Bitterzoet, Paradiso and Jimmy Woo or on Dutch festivals including North Sea Jazz festival, Appelsap, Mysteryland, Latin Village and Valtifest amongst others. Or you might hear her dropping by occasionally on Future Vintage Radio, a weekly radio show that she weekly hosted up till 2010 on Holland's radio program '3 voor 12' on 3FM radio.
Together with DJ/Producer I.N.T., MC Melodee is the cofounder of “La Melodia”. This hiphop duo brings you witty wordplay combined with production that is rich in detail. Not the average hiphop you may expect, as they cross borders and go beyond. Together this crew represents the city of Amsterdam, where they settled by way of Eindhoven about 10 years ago. What started with the independent release of the single Dough/For You on 12” vinyl in 2004, lead to a European tour with Stonesthrow’s artists Ohno, Percee P, Wildchild, Roc c and DJ Romes in 2005, a record deal with Japanese label Handcuts Records/Universal Japan in 2006, the release of their debut record “Vibing High” in the Benelux on PIAS in 2007, several frequently showed music videos on Dutch TV with the help of MTV/TMF, a tour with their own live band in 2008 and lots of performances worldwide on festivals including North Sea Jazz, Sonar, Popkomm, Soul Nation and Capetown jazz. A performance at New York’s Open at Santo’s, hosted by Rapper/Producer/DJ Q-tip and DJ/Producer Rich Medina also leads to performances on NYC’s CMJ (Music Marathon) and Music, Film & Interactive Conference SXSW (South by SouthWest) in Austin, Texas. In 2010 it even results in a new 7 inch vinyl release on record label ‘Record Breaking Music’ called “Chemistry b/w Working on it“. This is followed by the release of their latest album “Electronic Love” on La Melodia Records. A year later another vinylrelease "Flirtatious ft. Louis Bordeaux" follows on AudioWear LP, and La Melodia records a spectacular new video "Spaced Out" which is released independently in 2012. La Melodia brings you soulful hiphop with a hint of electric funk and raw yet hypnotic beats that will keep your head nodding from start to finish.
In 2009 MC Melodee is selected by the European Music Office to be a part of the ambitious three-year European project Diversidad. Dedicated to bring together urban cultures around Europe’s Urban scene, Diversidad selects 20 rappers, beatmakers and DJ’s from around Europe to become the framework of the European Year of Intercultural Dialogue. This collaboration leads to several featuring by MC Melodee on the 2010 album “The Experience” and to the participation of a European tour in 2011.
During this tour Mc Melodee meets talented and worldfamous production team Cookin’ Soul from Spain. Heads bop and a click is made instantly. Inspiration flows and songs are made, leading to the successful release of “ Check Out Melodee” in July 2011, “ Cha Cha Cha 2011” fall 2011 and “Up In The Clouds” winter 2011. In 2012 Cookin’ Soul sets up a collaboration between Melodee and Billboard #1 artist Mac Miller. This song called “Genius” is like the other songs one of the singles of the mixtape “Check Out Melodee” produced by Cookin’ Soul, hosted by DJ Whoo Kid which was released spring 2012. The mixtape which was released on Dat Piff featured respectable international artists like Mac Miller, Smiff n Wessum, Chuck Inglish (Cool Kids), Ohno, Mucho Muchacho, Griffi and DJ Whoo Kid. More European shows followed that year for MC Melodee, especially in Spain where she reached a lot of new fans after doing an interview for MTV Spain and a covershoot for HipHopLife Magazine with her new partners in music Cookin' Soul. After the succes of "Check Out Melodee" which was picked up by big international hiphopblogs like 2dopeboys, hiphop DX, Okayplayer, WeTheWest, OnDaReal, HiphopDE a.o., MC Melodee starts to work on a new project with Cookin' Soul late 2012. The first videosingle of this forthcoming project called "Ain't My Style" will drop end of Januari 2013.
With her fanbase growing, MC Melodee continues to tour around the world, both national and internationally. Expect more from this gifted female MC with the raspy voice and sick flow as she will contintue to pursue innovative and creative ways to craft and release her music...