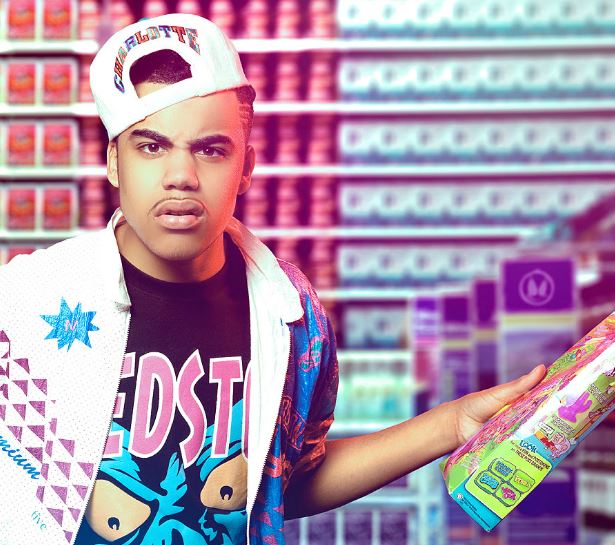 Let there be no mistake, Master Shortie – rapper, entrepreneur - samplemeister - indie/rap pioneer and musical trail-blazer - is a man who always gets what he wants.
This, after all, is a self-made 20-year-old artist who simply doesn’t play by anyone’s rules but his own. A man who has been recording raps off his own back and without any major label backing since he was 12 and is totally in charge of all of his own promotion, record releases, styling and marketing. As a result he’s become the poster boy of a DIY underground scene that represents everything that’s exciting and unique about UK music today, and all the while making the kind of vibrant, nail-you-to-the-groove 80s tinged electro-hop that puts him alongside Black Kids, Cool Kids and any other kind of kids that are redefining what 21st Century, post-industry music can be.
Born Theo Kerlin he moved South London. (with his mum and sister at the age of six), Shortie was already something of a music aficionado – his dad ran an East London jazz bar throughout his childhood and he grew up listening to everything from Prince to Aerosmith to Run DMC. After a short stint at the Brit School at the age of 14 (he soon dropped out, claiming “it wasn’t me, it didn’t suit me”), he started recording and producing his own adolescent hip-hop songs with producers and an underground reggae singer called Sparky. He’d rap about his experiences with girls and his hatred of being stereotyped, indulging his love of electronica, hip-hop and indie to create a brand of alternative hip-hop all his own. The two songs he recorded in his early teens took influence from the neo-soul underground New York Backpack rappers, Mos Def, Andre 3000, Prince, Paul Simon, Terence Trent Darby and Tracy Chapman, and certainly weren’t what the average rap toe-dipper might call ‘grime’.
Nabbing support slots with American urban acts such as ATL at the Hackney Empire, the Scala and Shepherd’s Bush Empire from the age of 16, Master Shortie honed his art writing and recording with all manner of dance, rap and rock acts. As something of a genre-hopping pioneer, Shortie was writing songs with guitar bands long before urban acts collaborating with indie bands or pop producers became the chart-topping norm.
Ironically, it’s Shortie’s charm, energy and individual style – the iris-scorching baseball caps, cuddly crunk accoutrements and the jeans of a Kings Of Leon – that set him apart from the crowd. But the ever-changing parade of wannabe svengalis swirling around him and several industry buzzes which came to nothing left Shortie distrustful of the music industry (as the spite-fuelled ‘Merry Go Round’ attests) and so he decided, with his trademark determination, to do it all himself.
Which, with the help of intense Myspace plugging (Shortie was on the site every day, interacting with his fans) and a home-made video for ‘Rope Chain’ on YouTube, turned Shortie from a child star of the commercial West End into the hottest underground alternative hip-hop act in the country. Hence he was asked to support fellow rock/rap rabble-rousers Hadouken! on their recent UK tour and is set to self-release indie rap thumper ‘Dead End’ as his first major single later this year.
Master Shortie’s fresh, enthusiastic self-made-man approach to making and releasing his music is an inspiration in an age when so many supposedly ‘underground’ acts are busy chasing major label deals and shrouding themselves in designer hype to mask their essential lack of talent. Here, however, is the Real Deal, and he’s ready to unleash his molten mix of The Rapture, Outkast, DMX, Usher, Klaxons, Prince, Axel F and drum’n’bass on the world. The question is, is the world ready for such an unquantifiable boy genius as MS?
“The albums called ADHD, standing for Attention Deficit Hyperactivity Disorder,” he says, “it’s like when someone’s different, people just don’t know what to do or how to take it, and as a child, if your different, they classify you as having ADHD. Same as my music, it’s very different, and the fact that it appeals to everyone, and it hasn’t been done before.”