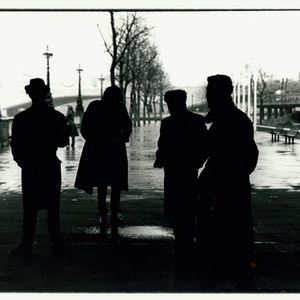 Bands with the name Mass:
- A British post-punk band.
- An American band.
- A German psychedelic sludge doom metal band.
- A British alternative band of the early 1990s.
- A performance group also referred to as MASS Ensemble.
- UK based improvisational power trio active from late 90s to mid 2000s.
- Alt/Progressive/Punk group from Newcastle, UK active since 2008.
- Heavy metal from Regensburg, Bavaria, Germany.
- see also M.A.S.S.- UK indie-pop group of the early '00s.
a) Mass (British post-punk band)
Mass were an English post-punk band, consisting of Gary Asquith, Mick Allen, Mark Cox, and Danny Briottet. Asquith, Allen and Cox had been members of Rema-Rema. Mass released the You & I 7" in 1980 on the 4AD Records label. They released the Labour of Love LP in 1981, also on 4AD. Asquith and Briottet went on to form Renegade Soundwave, whilst Allen and Cox formed The Wolfgang Press. Labour of Love was reissued on CD in November 2005. The CD includes the LP and 7 inch. Mick Allen is now part of Geniuser
b) Mass (American)
Mass, originally known as Axis started in 1981, to get a deal with A&M Records the band did a couple of showcases and the label liked them. So they went into Criteria Studios in Florida with Tom Allom and cut what was supposed to be thier first record. The album never came out due to the manager and A&M finally put the album on hold because they couldn't deal with him.
In 1984, MASS released thier first album, a self-titled EP produced by Jon Mathias. It was recorded at The Record Plant in New York City. The EP sold 10,000 copies in the Boston area alone, and got the attention of record companies.
In 1985, the band signed with RCA and released thier first major label debut, New Birth, produced by Tony Platt. The 45 single, Do You Love Me, went to Number One at one of the local Boston radio stations and hit Billboard's charts. The video made for that single was in rotation on MTV.
In 1987, MASS signed with Enigma and released thier third album, Take You Home, produced by John Rollo and MASS. This record sold tens of thousands in the United States as well as England, Japan, and other countries around the world.
In 1989, MASS released thier fourth record, Voices in the Night, on Enigma. Michael Sweet of the band Stryper was the producer. This CD sold well all over the world too. Songs such as Reach for the Sky, Turn it All Around, and Voices of the Night were available as CD singles. Songs from this CD also appeared on various compilations CD's. That year, MASS was nominated for Best Heavy Metal Act at the Boston Music Awards.
In 1992, Mass appeared on a compilation cd called, "The Boston Rock & Roll Anthology Vol 16". The song, "Under The Gun" was showcased on this cd and has yet to be seen on any other release.
In 1994 the band took on new bass player, Michael Palumbo and also decided to change the name of the band to "Mother Train". They appeared on a compilation cd of local artists call "Powerload - Volume 2" with the single "Crack Of Dawn". The name change lasted about a year before it was decided to go back thier original name.
In 2000, MASS released its fifth record titled Best Ones on Fore Reel Records. They continue to have a strong following all over the United States and around the world. Mass continues to write and record powerfully impressive songs with MASS style, driving hard rock with an edge and rocking melodies.
c) Mass (German)
Mass is an avant-garde sludge / stoner metal band formed in 1998 in Germany.
Tha last known line-up consists of:
Robert Merdzo - Vocals/Guitar/Keyboards
Constantin Curtuis - Bass
Sascha Schwegeler - Drums
d) Mass (UK - 1990s)
Mass were an alternative rock four-piece in the UK in the early 1990s. Signed to Abstract Records, they released the album 'rushingfloodperfume' (ABT090), and the 'Medusa' 12" single in 1991.
Line-up:
Steve Beatty - Drums
Daz Fralick - Bass/Backing Vocals
Nick Ryall - Guitars
E - Voice
e) MASS (Ensemble)
MASS is an internationally renowned performance group that combines the creative forces of artists, musicians, composers and choreographers. Through an exciting blend of sculpture, music, dance and the visual arts, MASS continues to delight audiences throughout the U.S. and abroad. MASS Ensemble is known for large-scale instruments and kinetic performances. The Earth Harp, "The World's Largest Stringed Instrument" and other invented instruments are unique to MASS, as they were designed and created by Artistic Director, Bill Close. The giant sculptural instruments provide a landscape in which the artists perform. (http://massensemble.com)
f) Mass (UK - improv)
UK trio led by guitarist Gary Smith, with Lou Ciccotelli (drums; previously associated with Laika, Spleen, God, Ice) and Gary Jeff (bass, electronics, samples).
MASS (Paratactile) 1998
FROM ZERO (Paratactile) 1998
MIXED MEDIA (Paratactile) 2003
g) MASS (UK - prog/punk) - http://www.myspace.com/massmassmass
h) Mass (German heavy metal)
They were formed in 1976 and released 8 albums between 1977 and 1986. Their lyrical themes revolved around life, sex, people and rock 'n' roll/heavy metal.