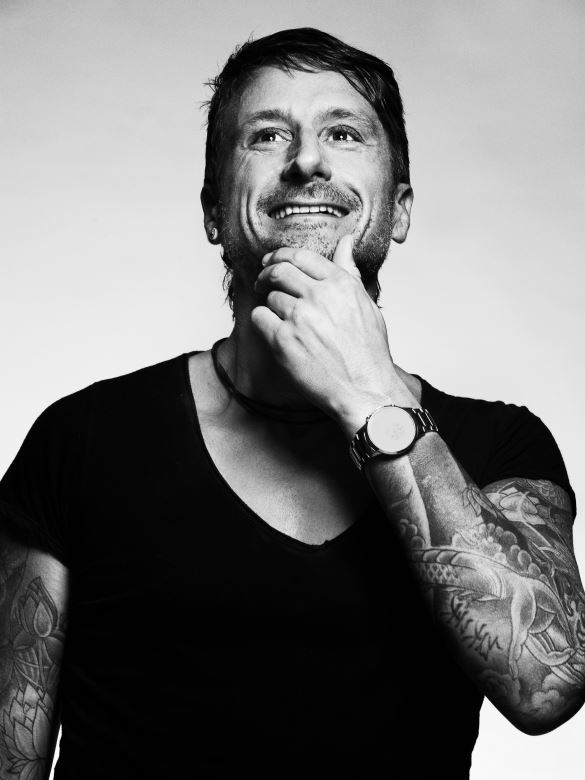 Marco grew up in a small village in Belgium. Nothing much happened there really, but he did learn that one doesn't achieve much without working hard. He is a true hedonist but a workaholic as well. Marco loves to work hard and spin records as much as possible; sleeping is for later. Therefore, his colleagues know him for his no-nonsense kick-ass mentality.
At the age of 12, Marco wanted nothing more than to become a sportsman since motocross and competitive cycling were his passions until injuries made it impossible to continue and Marco soon had a new obsession - music, then shortly after that DJing.
He started playing Funk, Hip Hop, Rock,New Wave and Punk!! Marco Bailey has spun every style of music and played pretty much everywhere in the world. There are not many countries in the world that Marco hasn't cracked a crowd as DJ.
His burning, all-consuming drive could only be calmed by getting into music. A positive result of this is seen on a daily basis in the studio, where together with his best friend Tom Hades he works on tracks and DJ sets, puzzling just as long as it takes to get it to sound right and release the right energy. Marco calls this his 'positive disorder', positive because it gives meaning to his life. He is constantly on the road or at work in the studio and doesn't take his job lightly. He invests all of his energy to make sure he can give the best possible performance to his audiences all around the world.
Having a superstar status in Belgium, he travels the world playing the biggest events as well as the small intimate clubs. His mixture of party techno, minimal and electronic house means he is a permanent fixture at all major European festivals and clubs. With love, hard work and fantastic sounds he has succeeded in gaining worldwide recognition. Playing events like Extrema Outdoor (NL), Time Warp (DE), Awakenings (NL), I Love Techno (BE), Nature One (DE), Wire (JP), Monegros (SP) and clubs such as Zouk or Avalon (SG), Ageha (JP), Space (ES), Industrial Copera (ES) and Chinese Laundry (AU) he has made clear that he still is a big force to reckon with.
Killer releases on respected labels of the industry such Bedrock, Intec Records, Drumcode, Tronic, Toolroom Rec, 1605 amongst others has confirmed his strong reputation as a producer to be followed. He has since set up MB Elektronics & MB Selektions to release high quality music and remixes by Marco himself alongside Carl Cox, John Digweed, Adam Beyer, Umek, Christian Smith, John Selway & Cristian Varela. In July 2011 MB Elektronics celebrated their 70th release with a special compilation put together by Marco.
In 2000 he joined forces with Christian Varela to set up Pornographic Recordings, a respected outlet to give unknown talent a chance to release their music. After a short hiatus where both parties concentrated on their own careers the label is back up and running with releases from Joseph Capriati and Cristian Varela.
The Pornographic parties, which are a great success in Spain (Ibiza), are continuing to become bigger and better around the world.
In 2009 John Digweed released the first of many Marco Bailey releases on his Bedrock Records Imprint (Jungle Laps in October 2009, Watergate and Rayavadee in 2010) These tracks led the way for Marco to release his debut artist album "Dragon Man" also on Bedrock Records in February 2011, a few other massive releases followed (Faint Hope and Sa Trinxa in April 2011, Oriental Disco in 2012, Stars & Shines March 2012).
Marco Bailey does not like to think in boxes but more outside the box. Although he has an expansive taste in music, techno keeps intriguing him. Despite techno growing into a bigger genre with its sub-styles in minimal, tech house and hard techno, he still discovers fascinating records in every style. This is the reason Marco's sound is so diverse and surprising.
Marco his weekly 'MB Elektronics Force’ radio show is now available worldwide as a podcast via iTunes and on more than 45 radiostations worldwide.
Marco's carrer has so far stretched more than 20 years as a DJ and 15 years as a producer and there are no signs of him slowing down here to the next 20 years!