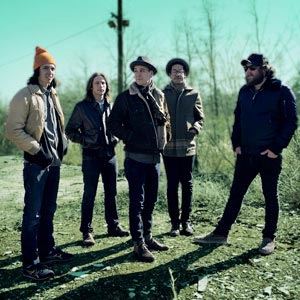 Manchester Orchestra is an American indie rock band which formed in Atlanta, Georgia in 2004. The group is currently composed of rhythm guitarist, singer/songwriter Andy Hull, lead guitarist Robert McDowell, keyboardist and percussionist Chris Freeman, bassist Jonathan Corley and drummer Tim Very. Former drummer Jeremiah Edmond parted ways with the band in January 2010 to focus on his family as well as running the band's record label, Favorite Gentlemen. The band has released four albums - 2006's I'm Like A Virgin Losing A Child, 2009's Mean Everything to Nothing, 2011's Simple Math, and 2014's Cope.
Manchester Orchestra originated in the suburbs of Atlanta, Georgia. They are named after the English city Manchester, a place rich in musical history (The Smiths, The Stone Roses, Joy Division, Oasis, New Order, Happy Mondays). Feeling increasingly alienated at his "small-town-Georgia, Christian high school", Hull became so frustrated that he spent his senior year studying at home. Early in their career, the band recorded an album entitled Nobody Sings Anymore. However, it was never released due to the shift in the band's musical direction and personal changes undergone following its recording. The band stated that "the band that made the record was different to the band now." Some of the tracks written for the album were released instead on the EP You Brainstorm, I Brainstorm, but Brilliance Needs a Good Editor.
Following You Brainstorm, I Brainstorm, but Brilliance Needs a Good Editor, Manchester Orchestra recorded and released their debut album I'm Like a Virgin Losing a Child. This album gained the attention of the music industry, and eventually led to their signing with Canvasback. The album was released nationwide July 27, 2007. Guitarist Robert McDowell did not appear on this album. The song Wolves At Night was featured in the video game NHL 08.
In October of 2008 the band recorded their second EP, Let My Pride Be What's Left Behind, with producer Dan Hannon and engineer Brad Fisher. It was released October 7, 2008.
In early September 2008, the band announced on their Myspace blog that they had begun recording their second album entitled Mean Everything to Nothing with producer Joe Chicarrelli (The Shins, My Morning Jacket). On February 4, 2009, the band posted a link to a free download of the single I've Got Friends and performed an acoustic version at The Fly’s In The Courtyard Sessions. The album was released April 21, 2009.
On January 26, 2010, the band released a digital split EP with Kevin Devine entitled I Could Be The Only One. Following the release of the Manchester Orchestra/Kevin Devine split EP, it was announced that Kevin Devine would record a full-length album along with the members of Manchester Orchestra later that year, with half the album written by Devine and half by Andy Hull. On April 10, 2010, it was announced the new project's name was Bad Books, and that the album would be released under that moniker, and not "Manchester Orchestra + Kevin Devine" as previously speculated. The self-titled full-length Bad Books album was digitally released on October 19, 2010, and on CD on November 9, 2010.
On March 2010, in an interview with the Dallas Observer, Hull mentioned that the band had begun work on a follow up to 2009's Mean Everything to Nothing tentatively entitled Let Go of Your Sorrowful Groaning. He also said that the band have around 34 songs they are demoing and that in writing this album he was imagining a "spiritual miscarriage". Later that year in an interview with Rip It Up magazine, the band announced that they were in the middle of recording their third full-length album. Although without a title, they explained that the album was completely different to anything they had released in the past. The album was being recorded with Dan Hannon and balanced between Blackbird Studios (Nashville, TN) and their own Favorite Gentlemen Studios (Atlanta, GA).
On October 23, 2010, during an appearance at Radio 104.5 in Philadelphia, following a Bad Books show in support of their recently released self-titled debut album, Manchester Orchestra debuted an acoustic version of the title track of their new album, Simple Math. Originally scheduled for release in March 2011, the band announced in January of 2011 that their third full-length studio album, Simple Math, would be released on May 10, 2011, as well as announcing the album's tracklist and revealing that the album was set to be a concept album.
For more info, check out their official site: http://www.themanchesterorchestra.com/ca/home